SoftBank Ventures Asia has participated in a $27 million Series A funding round in VoyagerX, a South Korea-based artificial intelligence (AI) software developer, according to an announcement. The early-stage venture capital arm of the SoftBank Group joined this round along with other investors including Altos Ventures and Yellowdog with each investing $9 million. VoyagerX will use the funds to develop more user-centric AI services and increase the depth of its talent pool, with the aim to hire 100 people by 2022. Founded in 2017 by Sedong Nam, VoyagerX's teams build AI solutions and tools that leverage deep learning capabilities – an offshoot of machine learning that imitates the human brain when creating patterns and processing data for decision-making. "With the rapid development of AI technology and the increased demand for digital solutions, we are seeing huge opportunities in the market. Artificial intelligence falls firmly in that category and VoyagerX, with their top-tier talent, creative innovation, and rapid time-to-market, have proven that they have the potential to be market leaders in this field," said JP Lee, CEO of SoftBank Ventures Asia.

According to new research from Google Cloud, manufacturers around the globe have accelerated their use of digital technologies due to the COVID-19 pandemic. Of the 1,154 senior manufacturing executives polled for the report, "Google Cloud Industries: Artificial Intelligence acceleration among Manufacturers," 76% said they have embraced "digital enablers" such as artificial intelligence, data analytics and cloud. "We used to count the number of AI and machine learning projects at Ford. Now it's so commonplace that it's like asking how many people are using math. This includes an AI ecosystem that is fueled by data, and that powers a'digital network flywheel,'" said Bryan Goodman, director of artificial intelligence and cloud, Ford Global Data & Insight and Analytics, in the report.

They're called the Sampo Generation: South Koreans in their 20s and 30s who have given up (po) three (sam) of life's conventional rites of passage -- dating, marrying and having children. They've made these choices because of economic constraints and in the process have worsened South Korea's demographic imbalances. Last year, when the country registered more deaths than births for the first time in recent history, then-Vice Finance Minister Kim Yong-beom pronounced the milestone a "death cross." "I Live Alone" is one of South Korea's most popular reality TV shows. It follows the single lives of movie actors and K-pop singers engaging in mundane activities such as feeding their pets or eating ramen in the middle of the night -- all alone.

On May 26, Image Comics is releasing a new book about artificial intelligence. Rather than asking big existential questions -- Why are we here? The couple purchased the artificial surrogate child in an attempt to grow their family. However, upon the robot Jesse's arrival, she discovers her new parents aren't the only ones who are in need of her talents. Put simply, Made in Korea is like if British TV series Humans were reimagined through the lens of legendary manga artist Osamu Tezuka and fixated on the question of nature vs. nurture. 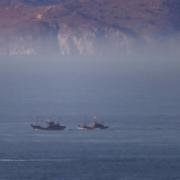 Chinese fishing is increasing security risks near South Korea's tense nautical border, said a top Cabinet member in Seoul, pledging to deploy advanced technology to crack down on illegal trawling. Minister of Oceans and Fisheries Moon Seong-hyeok said in an interview that illegal fishing must be "completely eradicated," joining in calls from across Asia to end what many see as Beijing's assertive push into regional waters. South Korea has long complained about Chinese trawlers operating in the Yellow Sea -- what Koreans call the West Sea -- near its islands off the coast of North Korea. "When it comes to illegal fishing, whether it be foreign or domestic vessels, we will crack down," Moon told Bloomberg News on Friday, saying South Korea will from next year increase its maritime surveillance systems using drones at sea and artificial intelligence. South Korea, which lists the U.S. as its main military ally and China as its biggest trading partner, turned up the pressure on Beijing over the weekend when it won from Washington a termination of bilateral missile guidelines that have long restricted Seoul's development of missiles to under the range of 800 kilometers (500 miles). 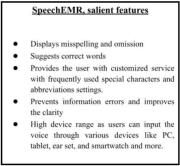 Seoul, South Korea: SpeechEMR, an automatic voice recognition service designed by Seoul-based health-tech startup DOUB, records medical events and converts them into text data in real-time facilitating users to record medical events in a jiffy. SpeechEMR provides a high recognition rate of over 95 percent using artificial intelligence (AI) voice recognition technology specially designed for use in the medical field. Spoken audio data such as the conversations between doctors and patients or medical dictations are converted into text in real-time, through processes such as noise removal and silent syllable separation. This voice recognition service then quickly edits and saves the medical records with misspelling and omission on display coupled with correct word suggestions and medical terminology dictionary provision. Preventing information errors and improving the clarity highlights important information such as numbers, dates, units, sizes, and locations increasing the clarity and preventing sensitive information errors.

In Japan, there are some winners from the global chip shortage

As the global chip shortage disrupts industries from home electronics to autos, a few small Japanese suppliers are stepping in to meeting the ballooning demand. Staying at home during the pandemic is fueling increased purchases of laptops, smartphones and games, which in turn has led to a shortage of semiconductors used in other industries. Large automakers have been forced to cut production -- globally, the sector could lose $60 billion in sales in 2021 as a result, according to IHS Markit. "Chip suppliers are doing well because orders of automotive and large household appliance chips are expanding," said Shoichi Arisawa, an analyst at Iwai Cosmo Securities Co. In addition, the auto sector is embarking on a long-term shift to add more high-performance chips for 5G wireless and autonomous driving systems.

After a year with no new major blockbusters, Jo Sung-hee's Space Sweepers arrives as a breath of fresh air. It's not a perfect movie, nor a particularly innovative one, but the science-fiction adventure--touted as the first Korean space blockbuster--is certainly fun, with colorful performances and impressive CGI, and a worthy substitute for a new Star Wars or Marvel movie. However, its presence in a year of absences isn't the only thing that makes it noteworthy. Unlike nearly all of the movies from those two dominant franchises, Space Sweepers is led by people of color. The main characters are a crew of Koreans, and the film is one of the rare space operas that doesn't posit that English has somehow become a universal language.

SK Telecom said on Thursday it has launched its 5G edge cloud service, called SKT 5GX Edge, embedded with Amazon Web Services (AWS) Wavelength in South Korea. The launch of the service will allow customers to build ultra-low latency mobile apps, the telco said, in areas such as machine learning, Internet of Things, gaming, and streaming. Use of the service will allow apps that are accessing the cloud to bypass the internet and regional websites, and quickly reach SK Telecom's data centre. The reduced step will allow customers to enjoy the full benefits offered by 5G network's low latency and bandwidth, the telco said. The first AWS Wavelength Zone has been launched in the city of Daejeon. It will expand to Seoul and other regions next year.