Discussions about the application of artificial intelligence (AI) in healthcare often span multiple areas, most commonly about making more accurate diagnoses, identifying at-risk populations, and better understanding how individual patients will respond to medicines and treatment protocols. To date, there has been relatively little discussion about practical applications of AI to improve medication management across the care continuum, an area this article will address. What's the first thing that comes to mind when someone mentions prescription drugs in the United States? In poll after poll, the high and rising costs of medications are American voters' top healthcare-related issue. This concern is well founded.

Three ventures from the IT and farming industries have started testing methods to produce cucumbers with less human labor in Sukagawa, Fukushima Prefecture, in the hope that it will reinvigorate the agriculture industry suffering from a worsening labor shortage, including a lack of successors. Two technology companies, Benefic Co. and MK tech, have teamed up with Fukushima Seed Center and established a project team called Smart Agri Fukushima. The team created a 1,300 square meters testing greenhouse, planted 2,000 cucumbers and is monitoring temperatures, humidity and carbon dioxide among other data remotely using robots. The team has already shipped 1.6 tons of produce to a local agricultural cooperative, with a plan to expand the greenhouse to 1 hectare, or eight times the current scale, in the next five years. In developing robots to monitor the cucumbers, Benefic will be in charge of its software while MK tech will manufacture the hardware.

The world was still normal then. At that early point in 2020 your enterprise, your community, your family were all planning for the year that you had expected. Maybe it would get a little exciting with a presidential election and the Summer Olympics. But essentially you laid out plans and executed them, and you didn't expect anything major to get in the way. Back in February, Accenture published its Technology Vision 2020 report, talking about the "techlash," a clash between the digital products and services companies had created and the differing expectations of consumers, society, and business ambitions.

"Machine Learning and Artificial Intelligence is overhyped and will take you nowhere soon." Have you heard a lot of this term? Are you in dilemma as a beginner where to dive into the world of ML & AI? Hi myself Aman Kumar Goyal and today I'll share with you my thoughts on the above specified topic. I am a student and my thoughts would be for those students who are thinking about learning AI but are in a dilemma. There is a wave of AI going around and one can see that nearly everyone wants to learn about machine learning but the above specified phrase also go hand-in-hand and it leads to a dilemma also, observing so many students learning about ML & AI sometimes it occurs in mind if everyone is learning it so how can one be able to secure a job. 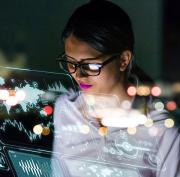 AI leaders are in high demand, but come from a wide variety of backgrounds and experiences. We look at common career paths and profiles, based on our recent analysis of more than 100 AI leaders worldwide. AI has steadily evolved from a near-mythical technology to a pressing reality for organizations in every industry. Hailed as the next Industrial Revolution, AI is projected to increase labor productivity by up to 40 percent, and profoundly change the nature of work.1 Current estimates show AI creating 2.3 million jobs, eliminating 1.8 million jobs and producing insights that will assist one in five workers.2 As AI technology matures, two major talent challenges confront organizations aiming to tap its rich potential.

Getting products from one place to another with as little human contact as possible is becoming an imperative for businesses as retailers, warehouses and transport providers adapt to the coronavirus pandemic, seeking to minimize the risk of infections to their employees and customers. Tsubakimoto Chain Co. is seeing more demand for its sorting and conveyor systems as companies seek ways to move things around, while startup Hacobu sees an opportunity to boost use of its online platform for trucks to exchange information as they load and unload goods at warehouses, a process that's still mostly done on paper. The need for automation is especially acute in Japan, where a labor shortage was already putting pressure on companies to find ways to run their businesses with less people. Now, that transition is being spurred on by the pandemic, which has boosted online buying and raised concerns among shoppers about being infected by items delivered to their doors. All told, the market for next-generation logistics systems in Japan is set to more than double to ¥651 billion ($6 billion) through 2025 from 2018, according to Fuji Keizai Co., a Tokyo-based research firm. Leader in AI-powered cancer diagnostics, Ibex Medical Analytics and provider of digital pathology services in the NHS, LDPath, have announced the UK's first rollout of clinical grade AI application for cancer detection in pathology. This platform will support pathologists in enhancing diagnostic accuracy and efficiency. Over the years, a global increase in cancer cases has coincided with a decline in the number of pathologists around the world. Traditional pathology involves manual processes that have remained the same for years. These processes involve slides to be analysed by pathologists using microscopes, and reporting is often carried out on pieces of paper.

Due to rapid technological advancements, Artificial Intelligence (AI) is now found in various aspects of our daily lives – though most of us are often completely unaware of how regularly we use it. From the recommendations we receive on Amazon or Netflix to the AI-driven camera software used to improve the photos we take on our smartphones, AI forms parts of the popular services that are used multiple times a day. Even the map and Satnav applications we use rely on AI. Company chatbots are a more well-known use of AI, and can now be found on nearly every company website you visit. In fact, it's been predicted that 80 per cent of companies will be using chatbots this year.

As the world gets to grips with the health and humanitarian emergency resulting from the spread of the coronavirus (Covid-19), the knock-on economic effects have also been stark. In an increasingly global economy, we have seen how fragile some supply chains have become. Our team quickly built a simple tool so organisations with great need could gain rapid access to our supplier insights, in order to help with shortages of critical supplies. The free service provides help to organisations performing emergency sourcing of critically needed medical equipment and supplies including surgical masks, hazmat suits, swabs and tubes etc. Until 30 April, organisations (such as NGOs, public bodies, local and national governments and healthcare providers) struggling to source urgently needed supplies can make a request for our AI powered supplier search at scoutbee Covid-19 Emergency Supply Chain Support.

Next Gen AI, what can we expect? 7wData

We made good progress on narrow AI, very good at specific tasks like object recognition and speech to text. On the other hand, we are still far off from General AI. Various challenges still exist in transparency of the outcomes of AI, trust by the ones using the algorithms and the shortage of skills. AI will play an important role to overcome these shortages. Join us in our chat with Wouter.