SK Telecom said on Thursday it has launched its 5G edge cloud service, called SKT 5GX Edge, embedded with Amazon Web Services (AWS) Wavelength in South Korea. The launch of the service will allow customers to build ultra-low latency mobile apps, the telco said, in areas such as machine learning, Internet of Things, gaming, and streaming. Use of the service will allow apps that are accessing the cloud to bypass the internet and regional websites, and quickly reach SK Telecom's data centre. The reduced step will allow customers to enjoy the full benefits offered by 5G network's low latency and bandwidth, the telco said. The first AWS Wavelength Zone has been launched in the city of Daejeon. It will expand to Seoul and other regions next year.

Lung cancer detection and radiologist performance can get a boost from an artificial intelligence (AI) algorithm that pinpoints previously un-detected cancers on chest X-rays. In a study published in the Dec. 10 Radiology: Cardiothoracic Imaging, investigators from Seoul National University Hospital outlined how a commercially available deep-learning algorithm outperformed four thoracic radiologists on both first and second reads. Overall, said the team led by Ju Gang Nam, M.D., the algorithm offered both higher sensitivity and higher specificity, and it improved providers' performance as a seconder reader, leading to significantly improved detection rates. But, to date, the team said, adoption of computer-aided detection with chest X-ray has been slow because many providers still have lingering questions about whether it can perform well enough in clinical practice. To answer that question, Nam's team used an enriched dataset of 50 normal chest X-rays, as well as 168 posteroanterior chest X-rays with lung cancers.

SEOUL (Reuters) - Hyundai Motor Group and its chairman have agreed to buy a controlling stake in Boston Dynamics from SoftBank Group Corp in a deal that values the U.S.-based robot maker at $1.1 billion. The South Korean automaker group said on Friday the purchase would help it expand automation in its vehicle factories and design autonomous cars, drones and robots, as it seeks to turn itself from a manufacturer into a broader mobility service provider. Hyundai Motor Group said the deal, which involves a new share issue, would give the company and its chief a combined 80% stake in Boston Dynamics, while Softbank will retain 20%. Newly promoted Hyundai Motor Group Chairman Euisun Chung has pledged to reduce reliance on traditional car manufacturing. He has said robotics would account for 20% of the firm's future business, while car-making would account for 50% and urban air transport would make up the remaining 30%.

The Impact of Robotics on the Service Industry

You arrive at your fancy hotel and are greeted by a robot that promptly takes your luggage off your hands and carries it to your room for you, all while reciting cool things to do and places to eat in the city nearby. It sounds like something out of a sci-fi movie, but the reality is that this is not so far-fetched after all. It is already happening in places like South Korea, where it was recently announced by the Novotel Ambassador Seoul Dongdaemun Hotels and Residences that they're going to be using a robot helper to deliver luggage and room service to guests' rooms, using 3D mapping, 5G and artificial intelligence. It's becoming more and more common to see robots being used in place of humans – in warehouse production lines, at airports and train stations, and even cleaning homes. So how is robotics going to change the service industry?

Nov. 25 (UPI) -- South Korea pledged to invest about $1 billion for artificial intelligence in semiconductor manufacturing to build on the nation's success developing computer chips to power economic growth. President Moon Jae-in said Wednesday at a meeting of South Korea's top tech executives in Goyang, Gyeonggi Province, that his administration is prepared to improve regulations on artificial intelligence and provide a road map for innovation, EDaily and News 1 reported. "Countries around the world are competing to dominate in artificial intelligence," Moon said. "South Korea's dream is to become a leader [in the sector] in the post-pandemic era." Moon also said Korea has applied AI for public use, and that Seoul will work to open an "AI era" that would allow South Koreans to enjoy the benefits of innovation in their daily lives. 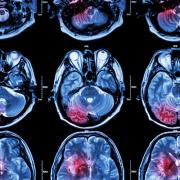 Researchers discussed how they used a deep-learning algorithm to detect, quantify, and assess the severity of infarcts in the brain on diffusion-weighted MRI (DWI-MRI) exams in acute ischemic stroke patients in a Sunday presentation at the virtual RSNA 2020 meeting. A team of researchers led by presenter Seung Hyun Hwang of Yonsei University in Seoul, South Korea, developed a deep-learning model that can segment and quantify brain infarcts using DWI-MRI and then assess their severity by analyzing apparent diffusion coefficient (ADC) maps of the lesions. In testing, the model achieved high sensitivity and specificity. "The qualitative and quantitative results of our study show feasibility for detecting and quantifying infarcts," Hwang said. Due to its sensitivity for the detection of small and early infarcts, DWI-MRI is commonly used for evaluation of acute ischemic stroke, according to Hwang.

Amazon Transcribe is an automatic speech recognition (ASR) service that makes it easy to add speech-to-text capabilities to your applications. Today, we're excited to launch Japanese, Korean, and Brazilian Portuguese language support for Amazon Transcribe streaming. To deliver streaming transcriptions with low latency for these languages, we're also announcing availability of Amazon Transcribe streaming in the Asia Pacific (Seoul), Asia Pacific (Tokyo), and South America (São Paulo) Regions. Amazon Transcribe added support for Italian and German languages earlier in November 2020, and this launch continues to expand the service's streaming footprint. Now you can automatically generate live streaming transcriptions for a diverse set of use cases within your contact centers and media production workflows.

LG Electronics said on Monday it has begun trials for its indoor robot delivery service. The company's service robots, called LG Cloi Servebot, will deliver products from convenience stores run by local store chain GS25 to anybody within LG Science Park, the company's headquarters in Seoul. The robots can get onto elevators on their own to move between nine floors above ground and a basement level to deliver lunch boxes, sandwiches, and drinks, LG said. LG Cloi Servebot has three drawers that can each carry up to 15kg of goods. Customers can order using their KakaoTalk chat app.

South Korea pledged to invest about $1 billion for artificial intelligence in semiconductor manufacturing to build on the nation's success developing computer chips to power economic growth. President Moon Jae-in said Wednesday at a meeting of South Korea's top tech executives in Goyang, Gyeonggi Province, that his administration is prepared to improve regulations on artificial intelligence and provide a road map for innovation, EDaily and News 1 reported. "Countries around the world are competing to dominate in artificial intelligence," Moon said. "South Korea's dream is to become a leader [in the sector] in the post-pandemic era." Moon also said Korea has applied AI for public use, and that Seoul will work to open an "AI era" that would allow South Koreans to enjoy the benefits of innovation in their daily lives.

SK Telecom and Seoul National University College of Medicine have developed an artificial intelligence (AI) tool to help identify dementia earlier. The AI tool analyses the voices of patients by having a 10-minute conversation with them to determine if they may have dementia, the two organisations said on Monday. They said the AI is able to do this as voice emitted from the vocal cord changes as it passes through the vocal tract and the way this happens is different for healthy individuals and dementia patients. The AI looks for this difference when making its diagnosis. This accessibility will assist in early diagnosis, SK Telecom said, which it explained is crucial for slowing down the progression of dementia.