Apple, Microsoft, Sony and Google have all tried to create a "Netflix for games", offering unlimited access to a library of titles for a flat monthly fee. But a growing number of reports suggest they may be about to face stiff competition from the streaming company itself. Netflix has been approaching senior game industry executives about joining it to lead the creation of a subscription games service, according to reports from the tech news site the Information and Reuters. Video games are not completely alien to the streaming service. It has licensed some of its in-house properties, including Stranger Things and The Dark Crystal, to developers to create tie-in games in the past.

In my experience, when you ask a person what their favorite film is, you'll often be told the title of the film that made the most impression on them at a most impressionable age. For some, it was "The Monster Squad" (1987). A pastiche of "The Goonies," featuring a group of suburban American kids up against the classic Universal monsters, instead of a pirate, the film mixes horror and comedy in the style of those Abbott & Costello Universal film spoofs (some of which are very good). "The Monster Squad" was not very well received by the critics (me included) or the public, which stayed away in droves to quote Sam Goldwyn ("The Lost Boys" preceded it by two weeks). But a funny thing happened.

The Morning After: Netflix queues up some free samples

What do you really need from an alarm clock? Smart displays can be a little extreme to sit by your bedside, but having something that syncs nicely with your phone doesn't hurt. Now Lenovo has followed last year's Google Assistant-connected Smart Clock with this few-frills Smart Clock Essential. As Cherlynn Low points out, its four-inch display doesn't just tell the time, it also shows the current weather and temperature, along with your alarms and other status indicators. Of course, it has microphones for "OK, Google" voice commands, and a three-watt speaker to make sure Mat's voice comes through clearly every morning.

The scripted life: what scripts and schemas can teach us about conversational experiences

It is an hour past midnight and you are still wide awake. After scrolling through various social media feeds, you decide you need to talk to someone. The question is, who is actually available for a chat right now? Then you remember, your one-night owl buddy who is always up for a conversation the moment you say, "hey, are you awake?" Lo and behold, your buddy is awake, and even though he is busy eating a late night snack of pizzas, he is ready for some banter. You chat for a bit about things like favorite episodes of Stranger Things, how poorly rested he is and that it is getting late, and that you have work tomorrow morning so you say "good night" and fall back to bed. 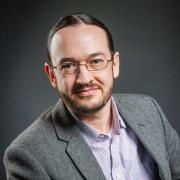 In the video above, Joanna Thelen (ENG'20) and Hung-Ching Lin (ENG'20) demonstrate Dart, the Stranger Things-inspired gripping soft robot. From the slithering of snakes to the crawling of octopuses, the field of soft robotics has often taken cues from the natural world. Boston University's Morphable Biorobotics Lab--led by Tommaso Ranzani, a College of Engineering assistant professor in mechanical, materials science, and biomedical engineering--is doing just that with "Dart," a new soft robot whose nickname is inspired by its resemblance to creatures from the popular Netflix series Stranger Things. Soft rubber robots have been able to bend, warp, and move around in unique ways, but until now, they've rarely been able to grasp objects and move them from place to place. It can not only move around on its four legs, but can grip and lift objects with its unique six-fingered mouth.

Amazon wants to see more consumers using their voices to control their TVs this holiday season. This week, it announced a new $35 product, the Fire TV Blaster, which acts as a universal remote of sorts, by enabling TVs that don't have voice access to respond to Alexa. It will be available Dec. 11. The advantages of voice versus clicking are substantial, says Amazon vice-president Sandeep Gupta, who stopped by the Los Angeles USA TODAY bureau for a Talking Tech audio interview. Voice is a more "flexible," experience and completes the task with less bother, he says.

Today's AI systems make weighty decisions regarding loans, medical diagnoses, parole, and more. They're also opaque systems, which makes them susceptible to bias. In the absence of transparency, we will never know why a 41-year-old white male and an 18-year-old black woman who commit similar crimes are assessed as "low risk" versus "high risk" by AI software. Oren Etzioni is CEO of the Allen Institute for Artificial Intelligence and a professor in the Allen School of Computer Science at the University of Washington. Tianhui Michael Li is founder and president of Pragmatic Data, a data science and AI training company.

Facebook's new augmented reality app for Sephora makeup may be the breakthrough AR needs. You see them walking around your neighborhood: smartphone users with device in hand, seemingly focused intently both on the screen and the world around them. Every so often, they stop, tap or swipe, and then move on. Welcome to the world of augmented reality (AR) gaming. When seen through the lens of your smartphone's camera, these games fuse the virtual with the physical, by superimposing digital information on top of the environment you're in.

Netflix may soon be known for more than just binge-watching TV and movies, as the company works to push out a new wave of video games based on the company's original content. The company is set to release a slew of video games throughout the next year, starting with the release of'Stranger Things 3: The Game' based on Netflix's wildly popular teen sci-fi series and slated for release on July 4. Additionally, 'The Dark Crystal: Age of Resistance', a companion to an upcoming series based on Jim Henson's'The Dark Crystal,' will be released on the Nintendo Switch later this year. Netflix is siphoning off its content for licensing in video games, a tandem of which will be release throughout the next year. The announcements were made at this year's E3 gaming conference. While'Dark Crystal's' companion game will be a turn-based strategy game that allows players to use different characters from he series, a'Stranger Things' title -- also available on the Switch -- will be a retro 16-bit adventure style game more similar to an RPG.