Why there won't be a robot uprising any time soon 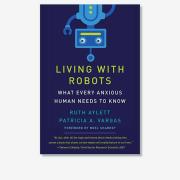 When you read the word'robot', what comes into your mind? Most people think of a'metal man', a large humanoid figure with a square head, rather like the Tin Man in the film The Wizard of Oz or R2D2 in Star Wars. But if you ask people whether they have come across a robot in their own lives, they will usually describe a robot vacuum cleaner, or lawnmower. Successful robots keep it simple. Robots lawnmowers and vacuum cleaners are really not amazingly intelligent.

A polymer that changes shape when heated can lift objects 5000 times its own weight, with potential applications in robotics. Shape-memory polymers flip between their normal state, where molecules are flexible and disordered, and their deformed state, where the molecules bind after being stretched. Once in the stretched, deformed state, the polymer can be unstretched – resuming its "normal" state – by applying heat or light. However, traditional shape-memory polymers don't store significant amounts of energy while being stretched – meaning they don't release much energy while unstretching, which limits their use in tasks that involve lifting or moving objects. Zhenan Bao at Stanford University in California and her colleagues have now produced a shape-memory polymer that does store and release appreciable amounts of energy.

Put the Bear on the Chair! Intelligent Robot Interaction with Previously Unseen Objects via Robot Imagination

In this letter, we study the problem of autonomously placing a teddy bear on a previously unseen chair for sitting. To achieve this goal, we present a novel method for robots to imagine the sitting pose of the bear by physically simulating a virtual humanoid agent sitting on the chair. We also develop a robotic system which leverages motion planning to plan SE(2) motions for a humanoid robot to walk to the chair and whole-body motions to put the bear on it, respectively. Furthermore, to cope with the cases where the chair is not in an accessible pose for placing the bear, a human-robot interaction (HRI) framework is introduced in which a human follows language instructions given by the robot to rotate the chair and help make the chair accessible. We implement our method with a robot arm and a humanoid robot. We calibrate the proposed system with 3 chairs and test on 12 previously unseen chairs in both accessible and inaccessible poses extensively. Results show that our method enables the robot to autonomously put the teddy bear on the 12 unseen chairs with a very high success rate. The HRI framework is also shown to be very effective in changing the accessibility of the chair. Source code will be available. Video demos are available at https://chirikjianlab.github.io/putbearonchair/.

A proxemics game between festival visitors and an industrial robot

With increased applications of collaborative robots (cobots) in industrial workplaces, behavioural effects of human-cobot interactions need to be further investigated. This is of particular importance as nonverbal behaviours of collaboration partners in human-robot teams significantly influence the experience of the human interaction partners and the success of the collaborative task. During the Ars Electronica 2020 Festival for Art, Technology and Society (Linz, Austria), we invited visitors to exploratively interact with an industrial robot, exhibiting restricted interaction capabilities: extending and retracting its arm, depending on the movements of the volunteer. The movements of the arm were pre-programmed and telecontrolled for safety reasons (which was not obvious to the participants). We recorded video data of these interactions and investigated general nonverbal behaviours of the humans interacting with the robot, as well as nonverbal behaviours of people in the audience. Our results showed that people were more interested in exploring the robot's action and perception capabilities than just reproducing the interaction game as introduced by the instructors. We also found that the majority of participants interacting with the robot approached it up to a distance which would be perceived as threatening or intimidating, if it were a human interaction partner. Regarding bystanders, we found examples where people made movements as if trying out variants of the current participant's behaviour.

Historically, most evolutionary algorithms (EAs) were designed to optimise a fitness function, solving a single problem without considerations for generalisation to unseen problems or robustness to perturbations to the evaluation environment. However, it was widely known that successfully converging to the maximum of that fitness function requires maintaining genetic diversity in the population of solutions (see e.g., Laumanns et al. (2002); Gupta and Ghafir (2012); Ursem (2002); Ginley et al. (2011)). Moreover, the use of niching demonstrated how maintaining subpopulations could help find multiple solutions to a single problem (Mahfoud, 1995). Some studies included genetic diversity as one of the objectives of the EA (Toffolo and Benini, 2003). Approaches in evolutionary robotics, artificial life, and neuro-evolution realised that genetic diversity does not necessarily imply a diversity of solutions, since (i) different genotypes may encode the same behaviour and vice versa (especially for complex genotypes such as neural networks); and (ii) many genotypes may encode unsafe or undesirable solutions that should be discarded during evolution (e.g., self-collisions on a multi-joint robot arm). Such approaches began to emphasise behavioural diversity (Mouret and Doncieux, 2009b; Gomez, 2009; Mouret and Doncieux, 2009a; Mouret, 2010), not only as a driver for objective-based evolution but also as the enabler for diversity-or novelty-driven evolution (Lehman and Stanley, 2011a). This work is the extended version of the paper: David M. Bossens & Danesh Tarapore (2021). On the use of feature-maps for improved quality-diversity meta-evolution.

Learning from rewards seems like the simplest thing. I make coffee, I sip coffee, I'm happy. My brain registers "brewing coffee" as an action that leads to a reward. That's the guiding insight behind deep reinforcement learning, a family of algorithms that famously smashed most of Atari's gaming catalog and triumphed over humans in strategy games like Go. Here, an AI "agent" explores the game, trying out different actions and registering ones that let it win.

Amazon Echo Show 10 Review: Alexa Has Got Its Eye on You

It was about 7:30 a.m. on a Friday when I asked the new Echo Show 10 to read me the news. I walked toward the coffee machine, bleary eyed, and poured my morning cup. When I finally looked up in the Echo Show's direction, it had turned to meet my gaze. As I walked back over, the screen panned again. In the morning light, I could see the device's pea-size, motion-detecting camera challenging me to a staring contest I'd never win. After experiencing the auto-tracking technology for the first time, I felt a mix of awe and dread.

Consider this scene from the 2014 film, Ex Machina: A young nerd, Caleb, is in a dim room with a scantily clad femmebot, Kyoko. Nathan, a brilliant roboticist, drunkenly stumbles in and brusquely tells Caleb to dance with the Kyoko-bot. To kick things off, Nathan presses a wall-mounted panel and the room lights shift suddenly to an ominous red, while Oliver Cheatham's disco classic "Get Down Saturday Night" starts to play. Kyoko--who seems to have done this before--wordlessly begins to dance, and Nathan joins his robotic creation in an intricately choreographed bit of pelvic thrusting. The scene suggests that Nathan imbued his robot creation with disco functionality, but how did he choreograph the dance on Kyoko, and why?

These virtual robot arms get smarter by training each other

A virtual robot arm has learned to solve a wide range of different puzzles--stacking blocks, setting the table, arranging chess pieces--without having to be retrained for each task. It did this by playing against a second robot arm that was trained to give it harder and harder challenges. Self play: Developed by researchers at OpenAI, the identical robot arms--Alice and Bob--learn by playing a game against each other in a simulation, without human input. The robots use reinforcement learning, a technique in which AIs are trained by trial and error what actions to take in different situations to achieve certain goals. The game involves moving objects around on a virtual tabletop.

In a factory production line, different industry parts need to be quickly differentiated and sorted for further process. Parts can be of different colors and shapes. It is tedious for humans to differentiate and sort these objects in appropriate categories. Automating this process would save more time and cost. In the automation process, choosing an appropriate model to detect and classify different objects based on specific features is more challenging. In this paper, three different neural network models are compared to the object sorting system. They are namely CNN, Fast R-CNN, and Faster R-CNN. These models are tested, and their performance is analyzed. Moreover, for the object sorting system, an Arduino-controlled 5 DoF (degree of freedom) robot arm is programmed to grab and drop symmetrical objects to the targeted zone. Objects are categorized into classes based on color, defective and non-defective objects.