Optical Components and the Rise of the Robots

Whilst the term artificial intelligence (AI) may conjure images of futuristic utopia and modern-day visionary technologies; the concept has actually been a societal forethought for longer than we think. Meanwhile, turn the clocks back considerably further to Ancient Egypt, and you'll find robotic-inspired animated ceremonial statues. Artificial intelligence is, in fact, centuries-old, and its implementation has long been a desire of the human race. Fast-forward to today and the omnipresence of robotics is remarkable. Not only are robots applied to large-scale industrial manufacturing chains (both assembling cars and integrated with vehicles themselves), but they're also found much closer to home on a smaller scale; hoovering our floors, mowing our lawns and, in some cases, stocking our shelves at local supermarkets1.

An AI Future: Einstein's or Frankenstein's? 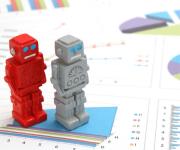 As I discuss at length in my recent book "The Weaponization of AI and the Internet," our human society is experiencing the very earliest beginnings of an expansively disruptive information revolution. Artificial Intelligence (AI)-enabled algorithms and automated machines are transforming our society, our daily lives, and potentially even our views of what it means to be "human" more rapidly and completely than we can possibly contemplate. Critical uncertainties remain regarding whether -- through our inventions -- we are inevitably outsmarting ourselves. Optimists among us believe that AI-assisted human intelligence will ultimately provide us with near-magical tools for alleviating suffering and realizing human potential. Some holding this vision foresee that super-intelligent AI systems will enable us to comprehend presently unknowable vast mysteries of the Universe, and to solve humanity's most vexing questions such as eradication of diseases, natural resource depletion and world hunger.

Is Artificial Intelligence Going to Steal My Job? 24x7 Magazine

For some time, financial and technology media have been sounding the alarm about job losses to artificial intelligence (AI) in the not-too-distant future. More recently, general media (e.g., The New Yorker), and even a presidential candidate--Andrew Yang--have jumped on the bandwagon forecasting doom. Obviously, forecasts on the extent of impact vary significantly from one source to another and the estimated amount of job losses depend on the job type. Nonetheless, it is valid to ask whether AI is going to slash clinical engineering/health technology management (CE/HTM) jobs, especially for those who are not planning to retire in the next decade. There is no question that AI can and will affect medical equipment maintenance and management.

KYOTO – A 400-year-old temple is attempting to hot-wire interest in Buddhism with a robotic priest it believes will change the face of the religion -- despite critics comparing the android to "Frankenstein's monster." The android Kannon, based on the Buddhist deity of mercy, preaches sermons at Kodaiji temple in Kyoto, and its human colleagues predict that with artificial intelligence it could one day acquire unlimited wisdom. "This robot will never die; it will just keep updating itself and evolving," said priest Tensho Goto. It can store knowledge forever and limitlessly. "With AI we hope it will grow in wisdom to help people overcome even the most difficult troubles. It's changing Buddhism," he added.

The Czech Play That Gave Us the Word 'Robot'

By the time his play "R.U.R." (which stands for "Rossum's Universal Robots") premiered in Prague in 1921, Karel Čapek was a well-known Czech intellectual. Like many of his peers, he was appalled by the carnage wrought by the mechanical and chemical weapons that marked World War I as a departure from previous combat. He was also deeply skeptical of the utopian notions of science and technology. "The product of the human brain has escaped the control of human hands," Čapek told the London Saturday Review following the play's premiere. "This is the comedy of science."

In 1818, Mary Shelley created popular culture's first and most enduring monster in "Frankenstein; or, The Modern Prometheus." Since then, "women have always been the most important part of monster movies," as Mallory O'Meara states in "The Lady From the Black Lagoon," her engaging and compelling, if uneven, book about artist Milicent Patrick, the unsung designer of another iconic monster. As a teenager, indie horror filmmaker O'Meara became captivated by Universal Pictures' 1954 "Creature From the Black Lagoon." Its eponymous amphibian star -- a scaled, humanoid figure fondly known to generations of sci-fi geeks as the Gill-man -- was the last of Universal's classic monsters, joining the studio's pantheon alongside Dracula, the Frankenstein monster and his Bride, and the Wolfman, among others. The Gill-man was also, as O'Meara learned to her delighted amazement, the first -- and at the time, only -- movie monster to have been designed by a woman.

This is the Frankenstein breakthrough that the medical world has long been dreading. A Chinese scientist yesterday declared that he has changed the fundamental genetic code of human babies, using methods that are banned in most of the world. The potential consequences are as alarming as they are unpredictable. No less an authority than Professor Stephen Hawking feared such experiments would one day create a race of'super-humans', ending mankind as we know it. Researchers have already discovered that gene editing may cause a host of cancers as a result of interfering in a genetic code so complex we will perhaps never be capable of understanding it fully.

The First Film Adaptation of Frankenstein Has Been Restored, and You Can Watch It Right Here

The Library of Congress has restored the first film adaptation of Mary Shelley's Frankenstein, an Edison production from 1910 directed by J. Searle Dawley. We tend to think of effects-driven spectacles as a product of the modern era, but decades before that checkerboard floor in Terminator 2: Judgement Day started moving, studios were selling films on the basis of single FX shots. Here's how the Edison company described their Frankenstein: To those who are not familiar with the story, we can only say that the film tells an intensely dramatic story by the aid of some of the most remarkable photographic effects that have yet been attempted. The formation of the hideous monster from the blazing chemicals of a huge caldron in Frankenstein's laboratory is probably the most weird, mystifying, and fascinating scene ever shown on a film. Frankenstein's creation is no longer the most weird, mystifying, and fascinating scene ever shown on film, but it's a fun trick-shot, using reversed footage of a dummy that has been set on fire to give the impression of a body knitting itself together from nothing.

The Link Between Mary Shelley's Frankenstein and AI

There is an indisputable link between Victor Frankenstein's creation (let's try and veer away from the term monster), and Artificial Intelligence. Mary Wollstonecraft Shelley's narrative of the modern Prometheus has travelled through time and space, surpassing generations. For me, the classic tale of Frankenstein and his creation is timeless - in the true sense of the word. It cannot be bolted down. Bore from growing scientific circles of the Victorian era and the mind of an intellectually advanced teenage girl, it boasts post-modern sensibilities and futuristic ideals.