Is AI really a threat to creators?

AI is here to take your job. For some, where repetitive tasks remain core to their work, this may already be true. Well, if you follow some of the latest trends in AI, there is reason to be mindful: AI now writes novels, produces art, and informs UX design. Artists are even fighting to keep AI from stealing their work. So, at a quick glance, you'll be going toe-to-toe in the art gallery and on the bookshelves with robotic creators soon enough.

Embodied agents, trained to explore and navigate indoor photorealistic environments, have achieved impressive results on standard datasets and benchmarks. So far, experiments and evaluations have involved domestic and working scenes like offices, flats, and houses. In this paper, we build and release a new 3D space with unique characteristics: the one of a complete art museum. We name this environment ArtGallery3D (AG3D). Compared with existing 3D scenes, the collected space is ampler, richer in visual features, and provides very sparse occupancy information.

Forget'a bull in a china shop' -- tomorrow, members of the public will be able to take remote control of an armed, paintball-firing robotic dog in an art gallery. Quirky, chaos-loving, New York-based start-up MSCHF (pronounced'mischief') are behind the campaign, which highlights the risk of such machines being misused. MSCHF mounted the compressed air gun onto the back one of Boston Dynamics' $75,000 Spot robots and will be linking its controls to a public website. Spot's'rampage' will begin at 13:00 EST (18:00 GMT) on February 24, 2021 and every two minutes the site will hand over control to a different smartphone user. The event is being held in a small art gallery constructed in MSCHF's Brooklyn offices -- one populated by paintings, vases, boxes and the firm's past products. Boston Dynamics have criticised MSCHF's paintball-firing application of their robot -- calling it the stunt a'spectacle' that'fundamentally misrepresents' Spot.

Pimloc gets $1.8M for its AI-based visual search and redaction tool – TechCrunch

U.K.-based Pimloc has closed a £1.4 million ( $1.8 million) seed funding round led by Amadeus Capital Partners. Existing investor Speedinvest and other unnamed shareholders also participated in the round. The 2016-founded computer vision startup launched a AI-powered photo classifier service called Pholio in 2017 -- pitching the service as a way for smartphone users to reclaim agency over their digital memories without having to hand over their data to cloud giants like Google. It has since pivoted to position Pholio as a "specialist search and discovery platform" for large image and video collections and live streams (such as those owned by art galleries or broadcasters) -- and also launched a second tool powered by its deep learning platform. This product, Secure Redact, offers privacy-focused content moderation tools -- enabling its users to find and redact personal data in visual content.

Have you ever pictured a robot and an art easel in the same room? A new gallery is bringing that to reality by linking artists with machines. The Cueva Gallery – described as the first of its kind in Ireland – is a gallery entirely devoted to artwork made or inspired by artificial intelligence (AI). It was set up by three people with "a passion for art and technology" – Dr Ernesto Diaz-Aviles, Dr Claudia Orellana-Rodriguez and Beth Jochim. We spoke to Jochim – the director of Dublin-based Cueva – about her vision for the gallery and why she and her colleagues – who have experience across machine learning (ML), creative AI, arts and humanities research and innovation – came together to bring this project to life.

Many services that perform information retrieval for Points of Interest (POI) utilize a Lucene-based setup with spatial filtering. While this type of system is easy to implement it does not make use of semantics but relies on direct word matches between a query and reviews leading to a loss in both precision and recall. To study the challenging task of semantically enriching POIs from unstructured data in order to support open-domain search and question answering (QA), we introduce a new dataset POIReviewQA. It consists of 20k questions (e.g."is this restaurant dog friendly?") for 1022 Yelp business types. For each question we sampled 10 reviews, and annotated each sentence in the reviews whether it answers the question and what the corresponding answer is. To test a system's ability to understand the text we adopt an information retrieval evaluation by ranking all the review sentences for a question based on the likelihood that they answer this question. We build a Lucene-based baseline model, which achieves 77.0% AUC and 48.8% MAP. A sentence embedding-based model achieves 79.2% AUC and 41.8% MAP, indicating that the dataset presents a challenging problem for future research by the GIR community. The result technology can help exploit the thematic content of web documents and social media for characterisation of locations.

GDC will host its own video game art gallery next year

E3 has the Into the Pixel art gallery for video game concept art, and now the annual Game Developers Conference is trying its hand at one. Called "Art Boss," it's a collaboration with the folks at iam8bit and will feature not just concept art (a la Into the Pixel), but production art, in-game stuff like textures and even promo materials. Another way this differs from Into the Pixel is that each artist will have a headshot and a bio alongside their submitted work -- the E3 gallery typically just lists the artist's name, game a piece came from and the studio responsible. More than that, iam8bit says it's creating a permanent digital and physical archive for the featured works. As for the latter, you'll very likely be able to catch a glimpse at the outfit's locations in Los Angeles and London.

How to Fake It As an Artist with Docker, AWS and Deep Learning 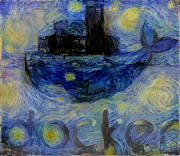 In UK Channel 4 documentaries series "Faking it", Paul O'Hare, a painter and decorator from Liverpool, was given just four weeks to transform himself into a fine artist and attempt to fool the critics at a London art gallery. We are going to show how to do it in less than half an hour and with a little help of Docker, AWS and Deep Learning, including the time you need to read this entry. In order to speed up your transformation, we are going to rely on an artificial intelligence system. This AI system is based on a Deep Neural Network that creates artistic images indistinguishable (we think) from the works of an artist. By combining the content of one image -- a portrait or a landscape photography -- with the style of another image -- typically, the works of a recognized artist -- .