In data mining, anomaly detection (also outlier detection) is the identification of rare items, events or observations which raise suspicions by differing significantly from the majority of the data. (Wikipedia)

Before doing any data analysis, the need to find out any outliers in a dataset arises. These outliers are known as anomalies. This article explains the goals of anomaly detection and outlines the approaches used to solve specific use cases for anomaly detection and condition monitoring. The main goal of Anomaly Detection analysis is to identify the observations that do not adhere to general patterns considered as normal behavior. For instance, Figure 1 shows anomalies in the classification and regression problems.

To achieve high-levels of autonomy, modern robots require the ability to detect and recover from anomalies and failures with minimal human supervision. Multi-modal sensor signals could provide more information for such anomaly detection tasks; however, the fusion of high-dimensional and heterogeneous sensor modalities remains a challenging problem. We propose a deep learning neural network: supervised variational autoencoder (SVAE), for failure identification in unstructured and uncertain environments. Our model leverages the representational power of VAE to extract robust features from high-dimensional inputs for supervised learning tasks. The training objective unifies the generative model and the discriminative model, thus making the learning a one-stage procedure. Our experiments on real field robot data demonstrate superior failure identification performance than baseline methods, and that our model learns interpretable representations. Videos of our results are available on our website: https://sites.google.com/illinois.edu/supervised-vae .

Since the label collecting is prohibitive and time-consuming, unsupervised methods are preferred in applications such as fraud detection. Meanwhile, such applications usually require modeling the intrinsic clusters in high-dimensional data, which usually displays heterogeneous statistical patterns as the patterns of different clusters may appear in different dimensions. Existing methods propose to model the data clusters on selected dimensions, yet globally omitting any dimension may damage the pattern of certain clusters. To address the above issues, we propose a novel unsupervised generative framework called FIRD, which utilizes adversarial distributions to fit and disentangle the heterogeneous statistical patterns. When applying to discrete spaces, FIRD effectively distinguishes the synchronized fraudsters from normal users. Besides, FIRD also provides superior performance on anomaly detection datasets compared with SOTA anomaly detection methods (over 5% average AUC improvement). The significant experiment results on various datasets verify that the proposed method can better model the heterogeneous statistical patterns in high-dimensional data and benefit downstream applications.

A Systematic Mapping Study in AIOps

IT systems of today are becoming larger and more complex, rendering their human supervision more difficult. Artificial Intelligence for IT Operations (AIOps) has been proposed to tackle modern IT administration challenges thanks to AI and Big Data. However, past AIOps contributions are scattered, unorganized and missing a common terminology convention, which renders their discovery and comparison impractical. In this work, we conduct an in-depth mapping study to collect and organize the numerous scattered contributions to AIOps in a unique reference index. We create an AIOps taxonomy to build a foundation for future contributions and allow an efficient comparison of AIOps papers treating similar problems. We investigate temporal trends and classify AIOps contributions based on the choice of algorithms, data sources and the target components. Our results show a recent and growing interest towards AIOps, specifically to those contributions treating failure-related tasks (62%), such as anomaly detection and root cause analysis.

How can we track synchronized behavior in a stream of time-stamped tuples, such as mobile devices installing and uninstalling applications in the lockstep, to boost their ranks in the app store? We model such tuples as entries in a streaming tensor, which augments attribute sizes in its modes over time. Synchronized behavior tends to form dense blocks (i.e. subtensors) in such a tensor, signaling anomalous behavior, or interesting communities. However, existing dense block detection methods are either based on a static tensor, or lack an efficient algorithm in a streaming setting. Therefore, we propose a fast streaming algorithm, AugSplicing, which can detect the top dense blocks by incrementally splicing the previous detection with the incoming ones in new tuples, avoiding re-runs over all the history data at every tracking time step. AugSplicing is based on a splicing condition that guides the algorithm (Section 4). Compared to the state-of-the-art methods, our method is (1) effective to detect fraudulent behavior in installing data of real-world apps and find a synchronized group of students with interesting features in campus Wi-Fi data; (2) robust with splicing theory for dense block detection; (3) streaming and faster than the existing streaming algorithm, with closely comparable accuracy. 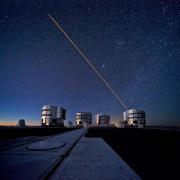 In line with Microsoft's recent announcements in Chile, Brad Smith, President of Microsoft, met with an ESO delegation, headed by its Director General, Xavier Barcons, to sign a new step of their agreement that addresses to optimize and enhance the science made from ESO Paranal Observatory telescopes through Artificial Intelligence (AI). Thanks to this initiative, ESO and Microsoft will work in three areas of great interest for the operations of the Paranal Observatory. The first project is Turbulence Nowcasting, which makes real-time weather and atmospheric predictions to determine whether weather conditions are suitable for different observations. The second project is Anomaly Detection in calibration images taken with ESO s scientific instruments. The visual inspection of the images is replaced by the automatic inspection through Machine Learning algorithms.

A Unifying Framework for Formal Theories of Novelty:Framework, Examples and Discussion

Managing inputs that are novel, unknown, or out-of-distribution is critical as an agent moves from the lab to the open world. Novelty-related problems include being tolerant to novel perturbations of the normal input, detecting when the input includes novel items, and adapting to novel inputs. While significant research has been undertaken in these areas, a noticeable gap exists in the lack of a formalized definition of novelty that transcends problem domains. As a team of researchers spanning multiple research groups and different domains, we have seen, first hand, the difficulties that arise from ill-specified novelty problems, as well as inconsistent definitions and terminology. Therefore, we present the first unified framework for formal theories of novelty and use the framework to formally define a family of novelty types. Our framework can be applied across a wide range of domains, from symbolic AI to reinforcement learning, and beyond to open world image recognition. Thus, it can be used to help kick-start new research efforts and accelerate ongoing work on these important novelty-related problems. This extended version of our AAAI 2021 paper included more details and examples in multiple domains.

Surrogate task based methods have recently shown great promise for unsupervised image anomaly detection. However, there is no guarantee that the surrogate tasks share the consistent optimization direction with anomaly detection. In this paper, we return to a direct objective function for anomaly detection with information theory, which maximizes the distance between normal and anomalous data in terms of the joint distribution of images and their representation. Unfortunately, this objective function is not directly optimizable under the unsupervised setting where no anomalous data is provided during training. Through mathematical analysis of the above objective function, we manage to decompose it into four components. In order to optimize in an unsupervised fashion, we show that, under the assumption that distribution of the normal and anomalous data are separable in the latent space, its lower bound can be considered as a function which weights the trade-off between mutual information and entropy. This objective function is able to explain why the surrogate task based methods are effective for anomaly detection and further point out the potential direction of improvement. Based on this object function we introduce a novel information theoretic framework for unsupervised image anomaly detection. Extensive experiments have demonstrated that the proposed framework significantly outperforms several state-of-the-arts on multiple benchmark data sets.

Thanks to the tractability of their likelihood, some deep generative models show promise for seemingly straightforward but important applications like anomaly detection, uncertainty estimation, and active learning. However, the likelihood values empirically attributed to anomalies conflict with the expectations these proposed applications suggest. In this paper, we take a closer look at the behavior of distribution densities and show that these quantities carry less meaningful information than previously thought, beyond estimation issues or the curse of dimensionality. We conclude that the use of these likelihoods for out-of-distribution detection relies on strong and implicit hypotheses, and highlight the necessity of explicitly formulating these assumptions for reliable anomaly detection.