"Fuzzy Logic is basically a multivalued logic that allows intermediate values to be defined between conventional evaluations like yes/no, true/false, black/white, etc. Notions like rather warm or pretty cold can be formulated mathematically and processed by computers."
– Peter Bauer, Stephan Nouak, and Roman Winkler. A Brief Course in Fuzzy Logic and Fuzzy Control. Available from ESRU [Energy Systems Research Unit], Department of Mechanical Engineering, University of Strathclyde. 1996.

The mathematics of least squares would have been so trivial for Gauss that even had he come upon the method he might have passed it over as but one of many, not noticing its true significance until Legendre's book prodded his memory and produced a post facto priority claim. There have been many extraordinary equations that changed the world (whether they were discovered or invented depends on whether you subscribe to mathematical Platonism--I do) but among the 17 equations that changed the world, the legendary Ordinary Least Squares (OLS) wasn't listed among them (though it is heavily related to both the Normal Distribution and Information Theory). It's a shame because the article and tweets referencing the "17 Equations" have been floating around for nearly ten years. So I will tell you about the magic of OLS, a little about its history, some of its extensions, and its applications (yes, to Fintech too). Subscribe for free to receive new posts and support my work.

Among various soft computing approaches for time series forecasting, fuzzy cognitive maps (FCMs) have shown remarkable results as a tool to model and analyze the dynamics of complex systems. FCMs have similarities to recurrent neural networks and can be classified as a neuro-fuzzy method. In other words, FCMs are a mixture of fuzzy logic, neural network, and expert system aspects, which act as a powerful tool for simulating and studying the dynamic behavior of complex systems. The most interesting features are knowledge interpretability, dynamic characteristics and learning capability. The goal of this survey paper is mainly to present an overview on the most relevant and recent FCM-based time series forecasting models proposed in the literature.

Selecting the best features in a dataset improves accuracy and efficiency of classifiers  in a learning process. Datasets generally have more features than necessary, some of  them being irrelevant or redundant to others. For this reason, numerous feature selection  methods have been developed, in which different evaluation functions and measures are  applied. This paper proposes the systematic application of individual feature evaluation  methods to initialize search-based feature subset selection methods. An exhaustive review  of the starting methods used by genetic algorithms from 2014 to 2020 has been carried out.  Subsequently, an in-depth empirical study has been carried out evaluating the proposal for  different search-based feature selection methods (Sequential forward and backward selection,  Las Vegas filter and wrapper, Simulated Annealing and Genetic Algorithms). Since  the computation time is reduced and the classification accuracy with the selected features  is improved, the initialization of feature selection proposed in this work is proved to be  worth considering while designing any feature selection algorithms.

The Ultimate Beginners Guide to Fuzzy Logic in Python

Understand the basic theory and implement fuzzy systems with skfuzzy library! Fuzzy Logic is a technique that can be used to model the human reasoning process in computers. It can be applied to several areas, such as: industrial automation, medicine, marketing, home automation, among others. A classic example is the use in industrial equipments, which can have the temperature automatically adjusted as the equipment heats up or cools down. Other examples of equipments are: vacuum cleaners (adjustment of suction power according to the surface and level of dirt), dishwashers and clothes washing machines (adjustment of the amount of water and soap to use), digital cameras (automatic focus setting), air conditioning (temperature setting according to the environment), and microwave (power adjustment according to the type of food).

Abstract: One major drawback of deep convolutional neural networks (CNNs) for use in safety critical applications is their black-box nature. This makes it hard to verify or monitor complex, symbolic requirements on already trained computer vision CNNs. In this work, we present a simple, yet effective, approach to verify that a CNN complies with symbolic predicate logic rules which relate visual concepts. It is the first that (1) does not modify the CNN, (2) may use visual concepts that are no CNN in- or output feature, and (3) can leverage continuous CNN confidence outputs. To achieve this, we newly combine methods from explainable artificial intelligence and logic: First, using supervised concept embedding analysis, the output of a CNN is post-hoc enriched by concept outputs.

Abstract: Decision-making is a process of choosing among alternative courses of action for solving complicated problems where multi-criteria objectives are involved. The past few years have witnessed a growing recognition of Soft Computing technologies that underlie the conception, design and utilization of intelligent systems. Several works have been done where engineers and scientists have applied intelligent techniques and heuristics to obtain optimal decisions from imprecise information. In this paper, we present a concurrent fuzzy-neural network approach combining unsupervised and supervised learning techniques to develop the Tactical Air Combat Decision Support System (TACDSS). Abstract: Several adaptation techniques have been investigated to optimize fuzzy inference systems. 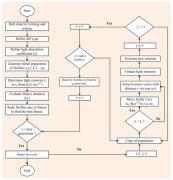 Evaporation calculations are important for the proper management of hydrological resources, such as reservoirs, lakes, and rivers. Data-driven approaches, such as adaptive neuro fuzzy inference, are getting popular in many hydrological fields. This paper investigates the effective implementation of artificial intelligence on the prediction of evaporation for agricultural area. In particular, it presents the adaptive neuro fuzzy inference system (ANFIS) and hybridization of ANFIS with three optimizers, which include the genetic algorithm (GA), firefly algorithm (FFA), and particle swarm optimizer (PSO). Six different measured weather variables are taken for the proposed modelling approach, including the maximum, minimum, and average air temperature, sunshine hours, wind speed, and relative humidity of a given location. Models are separately calibrated with a total of 86 data points over an eight-year period, from 2010 to 2017, at the specified station, located in Arizona, United States of America. Farming lands and humid climates are the reason for choosing this location. Ten statistical indices are calculated to find the best fit model. Comparisons shows that ANFIS and ANFIS–PSO are slightly better than ANFIS–FFA and ANFIS–GA. Though the hybrid ANFIS–PSO (R2= 0.99, VAF = 98.85, RMSE = 9.73, SI = 0.05) is very close to the ANFIS (R2 = 0.99, VAF = 99.04, RMSE = 8.92, SI = 0.05) model, preference can be given to ANFIS, due to its simplicity and easy operation.

We introduce a general theory of epistemic random fuzzy sets for reasoning with fuzzy or crisp evidence. This framework generalizes both the Dempster-Shafer theory of belief functions, and possibility theory. Independent epistemic random fuzzy sets are combined by the generalized product-intersection rule, which extends both Dempster's rule for combining belief functions, and the product conjunctive combination of possibility distributions. We introduce Gaussian random fuzzy numbers and their multi-dimensional extensions, Gaussian random fuzzy vectors, as practical models for quantifying uncertainty about scalar or vector quantities. Closed-form expressions for the combination, projection and vacuous extension of Gaussian random fuzzy numbers and vectors are derived.

Convolutional Neural Networks (CNNs) are artificial learning systems typically based on two operations: convolution, which implements feature extraction through filtering, and pooling, which implements dimensionality reduction. The impact of pooling in the classification performance of the CNNs has been highlighted in several previous works, and a variety of alternative pooling operators have been proposed. However, only a few of them tackle with the uncertainty that is naturally propagated from the input layer to the feature maps of the hidden layers through convolutions. In this paper we present a novel pooling operation based on (type-1) fuzzy sets to cope with the local imprecision of the feature maps, and we investigate its performance in the context of image classification. Fuzzy pooling is performed by fuzzification, aggregation and defuzzification of feature map neighborhoods. It is used for the construction of a fuzzy pooling layer that can be applied as a drop-in replacement of the current, crisp, pooling layers of CNN architectures. Several experiments using publicly available datasets show that the proposed approach can enhance the classification performance of a CNN. A comparative evaluation shows that it outperforms state-of-the-art pooling approaches.

This paper presents a comprehensive review of methods covering significant subjective and objective human stress detection techniques available in the literature. The methods for measuring human stress responses could include subjective questionnaires (developed by psychologists) and objective markers observed using data from wearable and non-wearable sensors. In particular, wearable sensor-based methods commonly use data from electroencephalography, electrocardiogram, galvanic skin response, electromyography, electrodermal activity, heart rate, heart rate variability, and photoplethysmography both individually and in multimodal fusion strategies. Whereas, methods based on non-wearable sensors include strategies such as analyzing pupil dilation and speech, smartphone data, eye movement, body posture, and thermal imaging. Whenever a stressful situation is encountered by an individual, physiological, physical, or behavioral changes are induced which help in coping with the challenge at hand. A wide range of studies has attempted to establish a relationship between these stressful situations and the response of human beings by using different kinds of psychological, physiological, physical, and behavioral measures. Inspired by the lack of availability of a definitive verdict about the relationship of human stress with these different kinds of markers, a detailed survey about human stress detection methods is conducted in this paper. In particular, we explore how stress detection methods can benefit from artificial intelligence utilizing relevant data from various sources. This review will prove to be a reference document that would provide guidelines for future research enabling effective detection of human stress conditions.