"A semantic network or net is a graphic notation for representing knowledge in patterns of interconnected nodes and arcs. Computer implementations of semantic networks were first developed for artificial intelligence and machine translation, but earlier versions have long been used in philosophy, psychology, and linguistics. What is common to all semantic networks is a declarative graphic representation that can be used either to represent knowledge or to support automated systems for reasoning about knowledge. Some versions are highly informal, but other versions are formally defined systems of logic. ...The oldest known semantic network was drawn in the 3rd century AD by the Greek philosopher Porphyry in his commentary on Aristotle's categories."
– from John F. Sowa, Semantic Networks, revised and extended version of article originally written for the Encyclopedia of Artificial Intelligence, edited by Stuart C. Shapiro, Wiley, 1987, second edition, 1992.

KGC is Community Driven and built to create space for interaction and networking. KGC crafts dedicated time slots enabling access to conference speakers into the program. The program includes multiple special events, such as the second KGC Startup Investor pitch, a joint industry survey results on Knowledge Graphs and wellness events such as meditation and yoga!

Actionable Cognitive Twins are the next generation Digital Twins enhanced with cognitive capabilities through a knowledge graph and artificial intelligence models that provide insights and decision-making options to the users. The knowledge graph describes the domain-specific knowledge regarding entities and interrelationships related to a manufacturing setting. It also contains information on possible decision-making options that can assist decision-makers, such as planners or logisticians. In this paper, we propose a knowledge graph modeling approach to construct actionable cognitive twins for capturing specific knowledge related to demand forecasting and production planning in a manufacturing plant. The knowledge graph provides semantic descriptions and contextualization of the production lines and processes, including data identification and simulation or artificial intelligence algorithms and forecasts used to support them. Such semantics provide ground for inferencing, relating different knowledge types: creative, deductive, definitional, and inductive. To develop the knowledge graph models for describing the use case completely, systems thinking approach is proposed to design and verify the ontology, develop a knowledge graph and build an actionable cognitive twin. Finally, we evaluate our approach in two use cases developed for a European original equipment manufacturer related to the automotive industry as part of the European Horizon 2020 project FACTLOG.

Medical knowledge graphs (KGs) constructed from Electronic Medical Records (EMR) contain abundant information about patients and medical entities. The utilization of KG embedding models on these data has proven to be efficient for different medical tasks. However, existing models do not properly incorporate patient demographics and most of them ignore the probabilistic features of the medical KG. In this paper, we propose DARLING (Demographic Aware pRobabiListic medIcal kNowledge embeddinG), a demographic-aware medical KG embedding framework that explicitly incorporates demographics in the medical entities space by associating patient demographics with a corresponding hyperplane. Our framework leverages the probabilistic features within the medical entities for learning their representations through demographic guidance. We evaluate DARLING through link prediction for treatments and medicines, on a medical KG constructed from EMR data, and illustrate its superior performance compared to existing KG embedding models.

Entity synonyms discovery is crucial for entity-leveraging applications. However, existing studies suffer from several critical issues: (1) the input mentions may be out-of-vocabulary (OOV) and may come from a different semantic space of the entities; (2) the connection between mentions and entities may be hidden and cannot be established by surface matching; and (3) some entities rarely appear due to the long-tail effect. To tackle these challenges, we facilitate knowledge graphs and propose a novel entity synonyms discovery framework, named \emph{KGSynNet}. Specifically, we pre-train subword embeddings for mentions and entities using a large-scale domain-specific corpus while learning the knowledge embeddings of entities via a joint TransC-TransE model. More importantly, to obtain a comprehensive representation of entities, we employ a specifically designed \emph{fusion gate} to adaptively absorb the entities' knowledge information into their semantic features. We conduct extensive experiments to demonstrate the effectiveness of our \emph{KGSynNet} in leveraging the knowledge graph. The experimental results show that the \emph{KGSynNet} improves the state-of-the-art methods by 14.7\% in terms of hits@3 in the offline evaluation and outperforms the BERT model by 8.3\% in the positive feedback rate of an online A/B test on the entity linking module of a question answering system.

Knowledge graph embedding (KGE) models learn to project symbolic entities and relations into a continuous vector space based on the observed triplets. However, existing KGE models cannot make a proper trade-off between the graph context and the model complexity, which makes them still far from satisfactory. In this paper, we propose a lightweight framework named LightCAKE for context-aware KGE. LightCAKE explicitly models the graph context without introducing redundant trainable parameters, and uses an iterative aggregation strategy to integrate the context information into the entity/relation embeddings. As a generic framework, it can be used with many simple KGE models to achieve excellent results. Finally, extensive experiments on public benchmarks demonstrate the efficiency and effectiveness of our framework.

Entity alignment (EA) is the task to discover entities referring to the same real-world object from different knowledge graphs (KGs), which is the most crucial step in integrating multi-source KGs. The majority of the existing embeddings-based entity alignment methods embed entities and relations into a vector space based on relation triples of KGs for local alignment. As these methods insufficiently consider the multiple relations between entities, the structure information of KGs has not been fully leveraged. In this paper, we propose a novel framework based on Relation-aware Graph Attention Networks to capture the interactions between entities and relations. Our framework adopts the self-attention mechanism to spread entity information to the relations and then aggregate relation information back to entities. Furthermore, we propose a global alignment algorithm to make one-to-one entity alignments with a fine-grained similarity matrix. Experiments on three real-world cross-lingual datasets show that our framework outperforms the state-of-the-art methods.

Finding out the differences and commonalities between the knowledge of two parties is an important task. Such a comparison becomes necessary, when one party wants to determine how much it is worth to acquire the knowledge of the second party, or similarly when two parties try to determine, whether a collaboration could be beneficial. When these two parties cannot trust each other (for example, due to them being competitors) performing such a comparison is challenging as neither of them would be willing to share any of their assets. This paper addresses this problem for knowledge graphs, without a need for non-disclosure agreements nor a third party during the protocol. During the protocol, the intersection between the two knowledge graphs is determined in a privacy preserving fashion. This is followed by the computation of various metrics, which give an indication of the potential gain from obtaining the other parties knowledge graph, while still keeping the actual knowledge graph contents secret. The protocol makes use of blind signatures and (counting) Bloom filters to reduce the amount of leaked information. Finally, the party who wants to obtain the other's knowledge graph can get a part of such in a way that neither party is able to know beforehand which parts of the graph are obtained (i.e., they cannot choose to only get or share the good parts). After inspection of the quality of this part, the Buyer can decide to proceed with the transaction. The analysis of the protocol indicates that the developed protocol is secure against malicious participants. Further experimental analysis shows that the resource consumption scales linear with the number of statements in the knowledge graph. 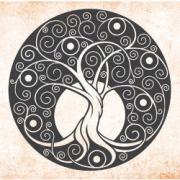 The 1980s saw the evolution of computing as it transitioned from industry to homes through the boom of personal computers. In the field of data management, the Relational Database industry was developing rapidly (Oracle, Sybase, IBM, among others). Object-oriented abstractions were developed as a new form of representational independence. The Internet changed the way people communicated and exchanged information.

The understanding of the human language is quantified by identifying intents and entities. Even though classification methods that rely on labeled information are often used for the comprehension of language understanding, it is incredibly time consuming and tedious process to generate high propensity supervised datasets. In this paper, we present the generation of accurate intents for the corresponding Roman Urdu unstructured data and integrate this corpus in RASA NLU module for intent classification. We embed knowledge graph with RASA Framework to maintain the dialog history for semantic based natural language mechanism for chatbot communication. We compare results of our work with existing linguistic systems combined with semantic technologies. Minimum accuracy of intents generation is 64 percent of confidence and in the response generation part minimum accuracy is 82.1 percent and maximum accuracy gain is 96.7 percent. All the scores refers to log precision, recall, and f1 measure for each intents once summarized for all. Furthermore, it creates a confusion matrix represents that which intents are ambiguously recognized by approach.