Gradient boosting is a powerful ensemble machine learning algorithm. It's popular for structured predictive modeling problems, such as classification and regression on tabular data, and is often the main algorithm or one of the main algorithms used in winning solutions to machine learning competitions, like those on Kaggle. There are many implementations of gradient boosting available, including standard implementations in SciPy and efficient third-party libraries. Each uses a different interface and even different names for the algorithm. In this tutorial, you will discover how to use gradient boosting models for classification and regression in Python. Standardized code examples are provided for the four major implementations of gradient boosting in Python, ready for you to copy-paste and use in your own predictive modeling project.

XGBoost is one of the most used libraries fora data science. At the time XGBoost came into existence, it was lightning fast compared to its nearest rival Python's Scikit-learn GBM. But as the times have progressed, it has been rivaled by some awesome libraries like LightGBM and Catboost, both on speed as well as accuracy. I, for one, use LightGBM for most of the use cases where I have just got CPU for training. But when I have a GPU or multiple GPUs at my disposal, I still love to train with XGBoost.

In the last post in the series, we defined what interpretability is and looked at a few interpretable models and the quirks and'gotchas' in it. Now let's dig deeper into the post-hoc interpretation techniques which is useful when you model itself is not transparent. This resonates with most real world use cases, because whether we like it or not, we get better performance with a black box model. For this exercise, I have chosen the Adult dataset a.k.a Census Income dataset. Census Income is a pretty popular dataset which has demographic information like age, occupation, along with a column which tells us if the income of the particular person 50k or not. We are using this column to run a binary classification using Random Forest.

Stochastic Gradient Boosting (SGB) is a widely used approach to regularization of boosting models based on decision trees. It was shown that, in many cases, random sampling at each iteration can lead to better generalization performance of the model and can also decrease the learning time. Different sampling approaches were proposed, where probabilities are not uniform, and it is not currently clear which approach is the most effective. In this paper, we formulate the problem of randomization in SGB in terms of optimization of sampling probabilities to maximize the estimation accuracy of split scoring used to train decision trees.This optimization problem has a closed-form nearly optimal solution, and it leads to a new sampling technique, which we call Minimal Variance Sampling (MVS).The method both decreases the number of examples needed for each iteration of boosting and increases the quality of the model significantly as compared to the state-of-the art sampling methods. The superiority of the algorithm was confirmed by introducing MVS as a new default option for subsampling in CatBoost, a gradient boosting library achieving state-of-the-art quality on various machine learning tasks.

Tree ensembles such as Random Forests have achieved impressive empirical success across a wide variety of applications. To understand how these models make predictions, people routinely turn to feature importance measures calculated from tree ensembles. It has long been known that Mean Decrease Impurity (MDI), one of the most widely used measures of feature importance, incorrectly assigns high importance to noisy features, leading to systematic bias in feature selection. In this paper, we address the feature selection bias of MDI from both theoretical and methodological perspectives. Based on the original definition of MDI by Breiman et al. \cite{Breiman1984} for a single tree, we derive a tight non-asymptotic bound on the expected bias of MDI importance of noisy features, showing that deep trees have higher (expected) feature selection bias than shallow ones.

Gradient Boosting (\GB) is a popular and very successful ensemble method for binary trees. While various types of regularization of the base predictors are used with this algorithm, the theory that connects such regularizations with generalization guarantees is poorly understood. We fill this gap by deriving data-dependent learning guarantees for \GB\ used with \emph{regularization}, expressed in terms of the Rademacher complexities of the constrained families of base predictors. We introduce a new algorithm, called \rgb\, that directly benefits from these generalization bounds and that, at every boosting round, applies the \emph{Structural Risk Minimization} principle to search for a base predictor with the best empirical fit versus complexity trade-off. Inspired by \emph{Randomized Coordinate Descent} we provide a scalable implementation of our algorithm, able to search over large families of base predictors. 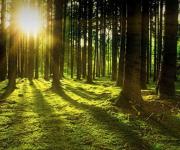 Click the link above to go to the article.

ABSTRACT The default variable-importance measure in random Forests, Gini importance, has been shown to suffer from the bias of the underlying Gini-gain splitting criterion. While the alternative permutation importance is generally accepted as a reliable measure of variable importance, it is also computationally demanding and suffers from other shortcomings. We propose a simple solution to the misleading/untrustworthy Gini importance which can be viewed as an overfitting problem: we compute the loss reduction on the out-of-bag instead of the in-bag training samples. Variable importance is not very well defined as a concept. Even for the case of a linear model with n observations, p variables and the standard n p situation, there is no theoretically defined variable importance metric in the sense of a parametric quantity that a variable importance estimator should try to estimate (Grömping, 2009).

Have you ever asked yourself a series of questions in order to help make a final decision on something? Maybe it was a simple decision like what you wanted to eat for dinner. You might have asked yourself if you wanted to cook or pick food up or get delivery. If you decided to cook, then you would have needed to figure out what type of cuisine you were in the mood for. And lastly, you probably needed to figure out if you had all of the ingredients in your fridge or needed to make a run to the store.