AI may not predict the next pandemic, but big data and machine learning can fight this one

In April, at the height of the lockdown, computer-science professor Àlex Arenas predicted that a second wave of coronavirus was highly possible this summer in Spain. At the time, many scientists were still confident that high temperature and humidity would slow the impact and spread of the virus over the summer months, as happens with seasonal flu. Unfortunately, Arenas' predictions have turned out to be accurate. Madrid, the Basque country, Aragon, Catalonia, and other Spanish regions are currently dealing with a surge in COVID-19 cases, despite the use of masks, hand-washing and social distancing. Admittedly, August is not as bad as March for Spain, but it's still not a situation many foresaw.

Elephants vs trains: This is how AI helps ensure they don't collide

Michel André has good listening skills. He's used them to study the sounds of the marine environment, why sperm whales collide with ferries in the Canary Islands, and the acoustic problems that pink dolphins face in the Amazon river. Last year, he and his team from the Laboratory of Applied Bioacoustics from Polytechnic University of Catalonia (UPC)-BarcelonaTech in Vilanova i la Geltrú were called in solve a problem in India. Records show that the Siliguri-Jalapaiguri railway line has the largest number of fatal collisions involving elephants in the country. Over the past 10 years, trains on this line have struck and killed more than 200 elephants.

Leveraging the Power of AI for European Cultural Heritage

BARCELONA, Spain, July 28, 2020 -- AI will now be well-versed in cultural heritage due to a new EU-funded project called Saint George on a Bike. Composed of researchers from the Barcelona Supercomputing Center (BSC) and Europeana Foundation, the project has begun training natural language processing and deep learning algorithms in culture, symbols, and historical context with the aim of automatically generating rich metadata for hundreds of thousands of images from various European cultural heritage repositories. Training AI to be aware of cultural heritage contexts is not as simple as teaching it to identify different objects in a picture. Saint George on a Bike is fine-tuning the algorithms so that it "thinks" in context and according to time parameters. "The AI we are developing will be able to tell whether a painting shows Saint George on a horse or a bike," said Maria Cristina Marinescu, senior researcher at BSC and coordinator of the Saint George on a Bike project. "This is not as easy as it sounds because the shapes are similar.

5G And Machine Learning: Taking Cellular Base Stations From Smart To Genius

An illuminated 5G sign hangs behind a weave of electronic cables on the opening day of the MWC ... [ ] Barcelona in Barcelona, Spain, on Monday, Feb. 25, 2019. At the wireless industry's biggest conference, over 100,000 people are set to see the latest innovations in smartphones, artificial intelligence devices and autonomous drones exhibited by more than 2,400 companies. At the core of this evolutionary step is the use of machine learning algorithms. The ability to be more dynamic with real-time network optimization capabilities such as resource loading, power budget balancing and interference detection is what made networks "smart" in the 4G era. While there are many uses of machine learning across all layers of a 5G network from the physical layer through to the application layer, the base station is emerging as a key application for machine learning.

This accessible and classroom-tested textbook/reference presents an introduction to the fundamentals of the emerging and interdisciplinary field of data science. The coverage spans key concepts adopted from statistics and machine learning, useful techniques for graph analysis and parallel programming, and the practical application of data science for such tasks as building recommender systems or performing sentiment analysis. This practically-focused textbook provides an ideal introduction to the field for upper-tier undergraduate and beginning graduate students from computer science, mathematics, statistics, and other technical disciplines. The work is also eminently suitable for professionals on continuous education short courses, and to researchers following self-study courses. Dr. Laura Igual is an Associate Professor at the Departament de Matemàtiques i Informàtica, Universitat de Barcelona, Spain.

In accordance with article 17.1 of the Catalan Law 19/2014, the Government of Catalonia permits the reuse of content and data provided that the source and the date of updating are cited and that the information is not distorted (article 8 of Catalan Law 37/2007) and does not conflict with a specific license.

Researchers associated with Google and the Partnership on AI have created a framework to help companies and their engineering teams audit AI systems before deploying them. The framework, intended to add a layer of quality assurance to businesses launching AI, translates into practice values often espoused in AI ethics principles and tackles an accountability gap authors say exists in AI today. The work, titled "Closing the AI Accountability Gap: Defining an End-to-End Framework for Internal Algorithmic Auditing" is one of a handful of outstanding AI ethics research papers accepted for publication as part of the Fairness, Accountability, and Transparency (FAT) conference, which takes place this week in Barcelona, Spain. "The proposed auditing framework is intended to contribute to closing the development and deployment accountability gap of large-scale artificial intelligence systems by embedding a robust process to ensure audit integrity," the paper reads. "At a minimum, the internal audit process should enable critical reflections on the potential impact of a system, serving as internal education and training on ethical awareness in addition to leaving what we refer to as a'transparency trail' of documentation at each step of the development cycle."

Mosquitoes spread disease, but this is how AI is biting back ZDNet

Along with their itchy bites, they spread serious diseases, like malaria, dengue or zika, which, as Microsoft co-founder Bill Gates has pointed out, kill more people every day than sharks have managed to do in an entire century. A Yale report released last year also suggests that climate change is going to make the problem worse. So, having early detection systems to promptly deploy preventive controls is crucial to protecting people. The Institute of Agrifood Research and Technology (IRTA) in Catalonia, Spain, has started to use artificial intelligence (AI), sensors, and satellite communications to automate the process of trapping mosquitoes and classifying them according to species, sex, age, and their potential for causing infection. Traps are not a new control technique.

L OSS AVERSION FOSTERS COORDINATION AMONG INDEPENDENT REINFORCEMENT LEARNERS ARX IV VERSION Marco Jerome Gasparrini University Pompeu Fabra Barcelona, Spain Martí Sánchez-Fibla † University Pompeu Fabra Barcelona, Spain January 1, 2020 A BSTRACT We study what are the factors that can accelerate the emergence of collaborative behaviours among independent selfish learning agents. We depart from the "Battle of the Exes" (BoE), a spatial repeated game from which human behavioral data has been obtained (by Hawkings and Goldstone, 2016) that we find interesting because it considers two cases: a classic game theory version, called ballistic, in which agents can only make one action/decision (equivalent to the Battle of the Sexes) and a spatial version, called dynamic, in which agents can change decision (a spatial continuous version). We model both versions of the game with independent reinforcement learning agents and we manipulate the reward function transforming it into an utility introducing "loss aversion": the reward that an agent obtains can be perceived as less valuable when compared to what the other got. We prove experimentally the introduction of loss aversion fosters cooperation by accelerating its appearance, and by making it possible in some cases like in the dynamic condition. We suggest that this may be an important factor explaining the rapid converge of human behaviour towards collaboration reported in the experiment of Hawkings and Goldstone. 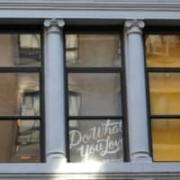 BARCELONA, SPAIN – A growing push to put cities on a digital path to a greener future risks excluding groups like the poorest, disabled and elderly, and will fail to benefit those people unless technology is used to help meet their needs, rights advocates have warned. They also called for women to be given a bigger say in urban planning that is based on high-tech tools such as big data and artificial intelligence, while speaking at an international conference on "smart cities" in Barcelona this week. "My fear is that smart cities end up benefiting the elite white men," said Catherine D'Ignazio, an assistant professor at Massachusetts Institute of Technology. In the United States, she said, national politics and other social spheres are shaped by "the privilege hazard," in which a small, dominant group -- often of rich, older men -- make decisions for others whose lives and experiences they know little about. One way to counteract that is to produce and use data that dive into key areas of discrimination, such as gender and race, she added.