How Data Can Create Full-On Apparitions of the Dead

Joaquin Oliver died in the 2018 Parkland shooting, but recently, he urged people to vote in the 2020 election. Oliver's parents used A.I. to have their dead son encourage people to vote for officials who support gun control, as an extension of the nonprofit they run, Change the Ref. Technologists 3D-printed Oliver's image and created a video of him speaking out against gun violence, which his parents could take to protests around the country. In the video, Oliver's likeness says "I mean, vote for me. Parkland victim Joaquin Oliver urged people to vote in a video that used artificial intelligence to imagine what he'd look like today. Oliver was killed in 2018 in the MSD high school shooting. The video of Oliver, titled "Unfinished Vote," used deepfake technology from Lightfarm Studios. For deepfakes--images and videos generated using A.I.--of celebrities, influencers, or politicians, or more typical public figures, the production team would usually have thousands of images and videos with which to train the A.I. But in the case of a teenager who was more famous after death than during life, the technologists didn't have much material to work with. Instead, they created a single image of his face using three different photographs. Still, the video is convincing enough. The uncanny valley effect comes after the fact, once you realize that the young man in the video who is speaking to you is not actually speaking. On Thursday, shortly before Halloween and in the wake of a much derided, viral tweet exposing her immense wealth and privilege, Kim Kardashian West reacted to Kanye West's surprise gift to her: a hologram of her dead father. In an Instagram post, Kardashian West wrote, "For my birthday, Kanye got me the most thoughtful gift of a lifetime.

So it turns out that Kim Kardashian whisking her friends and family off to a private island in the middle of a pandemic was only the second craziest thing about her 40th birthday celebration. On Thursday, Kardashian revealed what her husband, Kanye West, got her the birthday gift at the top of every woman's wish list: her very own hologram. And not just any hologram: It was a so-called holographic resurrection of her late father, Robert Kardashian, who died in 2003. Kaleida, a "multimedia hologram company," published a page to its website taking credit for the creation (Kardashian and West have not yet confirmed the hologram's origins). Reached by Slate, Kaleida director and producer Daniel Reynolds declined to discuss any specifics of the Kardashian hologram, but agreed to speak about the company and its technology more generally. How exactly do you order a hologram of a late relative?

An AI bot has been taught to create surreal, Banksy-esque artworks

Over the past year we've heard AI-generated music in the style of Kanye West, Tupac, and Nas, a lyrically nonsensical (but stylistically pretty believable) track based on the catalogue of Travis Scott, and a fake Nirvana song written by a computer. It's not just musicians that are being tapped for inspiration by artificial intelligence though, as confirmed by a recent bot that's learned to create drawings in the style of Banksy. Named GANksy (after the machine learning framework, a generative adversarial network, on which it's based) the software "was born into the cloud" in September 2020, as detailed in a statement on the creator's website. The statement continues to explain that GANksy was trained using hundreds of images from the portfolio of a "certain street artist". And though Banksy isn't explicitly mentioned by name, it seems pretty clear from the title – plus the fact that the images are eerily reminiscent of his work – that he's the artist in question.

Artists may need to start competing with -- or embracing -- computer-made songs and soundtracks in the near future, if a new AI music generator shows any indication of what could come next for the music industry. Researchers at artificial intelligence lab OpenAI have released Jukebox, an open-source algorithm that can generate music, complete with lyrics, vocals, and a soundtrack. All the algorithm needs is a genre, an artist, and a snippet of lyrics, and Jukebox can create song samples that can be realistic and quite catchy. OpenAI's music generator runs on the same sort of machine-learning technology used to create deepfakes and employed by the slew of sites that popped up in 2019 generating fake memes, fake Airbnb listings, and fake cats. Jukebox produces its AI creations using artificial neural networks that train a computer to learn from an influx of data.

This Software Can Make Kanye West Rap Eminem's 'Lose Yourself'

We have taught computers to do some amazing and horrible things, as a species. But nothing summarizes both of these facets quite like a machine-learning-generated snippet of Kanye West rapping Eminem's "Lose Yourself" with what sounds like a mouthful of stockpiled quarantine Nutella. This is just one example of the thousands of cursed yet compelling song snippets generated by Jukebox, machine learning software developed by independent research organization Open AI and released to the world on Thursday. The fine details (which you can read in an accompanying paper) are complicated but the general idea is the researchers trained machine learning models capable of parsing music on audio from more than 1 million songs pulled from the web. From this fuzzy internal picture of what constitutes listenable music, Jukebox generates new songs in various genres and in the style of specific artists.

ICT industry veteran Andile Ngcaba's inq., a Pan-African digital service provider, wants to be Africa's number one artificial intelligence (AI) service provider. The company has points of contacts in 12 African cities, Johannesburg, Gaborone, Lusaka, Ndola, Blantyre, Lilongwe, Mzuzu, Lagos, Abuja, Port Harcourt, Kanu and Abidjan. It has concluded the 100% acquisition of Vodacom Business Africa's operations in Nigeria, Zambia and Cote d'Ivoire with a further planned acquisition in Cameroon pending regulatory approvals. At the time of the announcement of the transaction last June, inq. said this deals represents a significant milestone to its vision to be a leading provider of cloud and digitally based services in key markets across sub-Saharan Africa and provides additional vital assets in its build-out of a regional footprint. Today, inq. said this landmark transaction grows inq.'s regional footprint to 13 cities in 7 countries across Africa including its existing operations in Botswana, Malawi and Mozambique.

Christen Limbaugh Bloom: God using Kanye to inspire believers -- and even the skeptics

Director of Ministry Intelligence at the American Bible Society Dr. John Farquhar Plake provides free bibles to Kanye fans. It's no secret Kanye West's "Jesus is King" album set the internet on fire over the past week. Fox News reported that Google searches for "Jesus" and "Christian beliefs" significantly spiked since the album's release on Oct. 25, and it has sparked both social media and real-life conversations among countless Christians and skeptics. After listening to the songs and watching several of West's interviews where he explains the reasoning behind his drastic change of behavior and newly professed "sonship" to the Kingdom of God, I'm convinced God is using him to inspire both believers and non-believers alike. In his appearance on "Jimmy Kimmel Live!" West was asked if he now considers himself a "Christian music artist."

How future tech is helping elephants 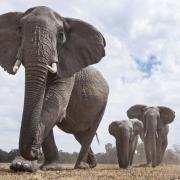 These intelligent, complex and emotional beasts have come to symbolize wildlife conservation efforts around the globe. Across the African continent, they are under threat from encroaching human settlements and continued poaching -- in the summer of 2018, an aerial survey in Botswana found 87 elephants had been killed and their tusks cut off for their ivory, the biggest slaughter in recent years. But elephants are part of a complex ecosystem and scientists and conservationists know protecting them isn't just crucial to the species itself, but for other African animals, birds and plants. Elephants are a keystone species -- their presence and activities play a crucial role in maintaining the health of the savannah and forests they inhabit. For example, they use their tusks to dig for water, providing this scarce resource for other species as well.

Best deals for Tuesday: Save on Hoover and Dyson vacuums, KitchenAid and Mr. Coffee coffeemakers, Echo Dot, and more

We gathered the best deals on floor care products and kitchen gear from Amazon, Walmart, and Best Buy. We also have deals on adult learning courses from Udemy. If you ever wanted to learn web design and coding, we have deals that will suit your interests. SEE ALSO: Be better than Kanye: Use a password manager like this one that's on sale. There are a number of deals on vacuums, including Hoover's WindTunnel 3 High Performance Pet Bagless Upright Vacuum, which is on sale for $149.99, and Dyson's Ball Multi Floor Canister Vacuum, which is discounted to $240.53, or about $160 off its list price.

"Mindy Project" actor Ike Barinholtz says President Trump's obsession with loyalty was one of inspirations behind the premise of his new film, "The Oath." Democratic columnist Jonathan Harris on Friday slammed what he called the hypocrisy in President Trump's Oval Office meeting with musician Kanye West. Canadian astronaut Col. Chris Hadfield (Ret.) on Friday described what happened in a rocket failure this year with a Russian cosmonaut and an American astronaut, and the safety protocol they followed during the malfunction. Canadian astronaut Col. Chris Hadfield (Ret.) said Friday that private companies such as Boeing and Tesla are in a prime position to take advantage of space travel. The contents of this site are 2018 Capitol Hill Publishing Corp., a subsidiary of News Communications, Inc.