How Biden Could Prove His Administration Isn't Just Obama 2.0

So far, the members of Joe Biden's foreign policy team are all veterans of Barack Obama's administration. They've pledged to revive Obama-era initiatives like the Iran nuclear deal and the Paris climate agreement that Donald Trump tried to undo, as well as recommit to long-term U.S. alliances. Some U.S. foreign policy critics from the left and the libertarian right are less than fully enthusiastic about this team. They don't particularly relish a return to the approach that led to the intervention in Libya, a ramped-up drone war, and a troop surge in Afghanistan, and are concerned that all the talk of "America is back" broadly suggests an embrace of the interventionist worldview that predated Trump. Progressive concerns about the more hawkish views of Michèle Flournoy (Democratic Rep. Ro Khanna is one representative example), who was thought to be a shoo-in for secretary of defense, are reportedly one reason why that position has not yet been announced.

The move set off a wave of criticism from many Democratic and some Republican lawmakers, who said the decision undermined the pact. By ignoring a part of the agreement it finds inconvenient, they say, the Trump administration is encouraging other nations to do the same. And the sale of advanced armed drones could lead to the proliferation of the technology across the globe. The lawmakers are especially concerned about sales to Saudi Arabia and the United Arab Emirates, which have used American-made weapons to carry out a devastating war in Yemen that has left thousands of civilians, many of them children, dead. "If we allow Trump to start selling drones, we set a dangerous precedent that allows and encourages other countries to sell missile technology and advanced drones to our adversaries," Senator Christopher S. Murphy, Democrat of Connecticut and a sponsor of the bill, said in a statement on Wednesday.

The Saudi-led military coalition, which has been battling the Houthi rebels in Yemen, said on Saturday it had intercepted and destroyed a ballistic missile targeting the Saudi Arabian border city of Najran. In a statement issued via the Saudi state news agency SPA, coalition spokesman Turki al-Malki said the missile was fired from the Yemeni city of Saada, and some people were slightly injured by fragments of the weapon when it was destroyed. The missile had targeted civilian facilities in the southwestern Saudi city of Najran near the border with Yemen, the coalition said. The Houthis, who have controlled the capital, Sanaa, and areas in the country's north since 2014, did not confirm the attack. The rebel group has launched dozens of drone attacks on Saudi Arabia in the past in what they call retaliation to the Saudi intervention in Yemen.

DUBAI, UNITED ARAB EMIRATES – Al-Qaida in the Arabian Peninsula on Sunday confirmed the death of its leader, Qassim al-Rimi, and appointed a successor, weeks after the U.S. said it had "eliminated" the Islamist militant chief, SITE Intelligence group said. The announcement came in an audio speech delivered by AQAP religious official, Hamid bin Hamoud al-Tamimi, said the group, which monitors jihadi networks worldwide. "In his speech, Tamimi spoke at length about Rimi and his jihadi journey, and stated that Khalid bin Umar Batarfi is the new leader of AQAP," it said. SITE said Batarfi has appeared in many AQAP videos over the past several years and appeared to have been Rimi's deputy and group spokesman. President Donald Trump announced Rimi's death earlier this month, saying he had been killed in a U.S. "counterterrorism operation in Yemen."

According to an American military official, the 358 missile in flight is about nine feet long and can run on kerosene or diesel fuel contained in flexible containers that do not require a separate fuel pump. A dozen infrared lenses arranged in a ring around the missile are believed to be able to defeat heat-seeking countermeasures that coalition helicopters typically use. Another United States military official said that the 358 missiles from Iran had been fired against American drones flying in Yemeni airspace, but they had not yet succeeded in hitting any. Three of the 358 missiles were captured in November by the Forrest Sherman, a Navy destroyer, and five more were recovered this month in an operation by the Normandy, a Navy cruiser. Those shipments also included more than 170 antitank guided missiles made in Iran, as well as 13,000 blasting caps, which are critical to making modern roadside bombs.

U.S. killing of leader of al-Qaida in the Arabian Peninsula hurts group in Yemen

DUBAI, UNITED ARAB EMIRATES – The U.S. has killed the leader of al-Qaida in the Arabian Peninsula in war-torn Yemen, raising questions about the jihadi group's operations and its future. President Donald Trump said the United States "conducted a counterterrorism operation" that eliminated Qassim al-Rimi, according to a White House statement released on Thursday. But what does this mean for AQAP and for Yemen, where a five-year war between the government -- backed by a Saudi-led military coalition -- and the Iran-aligned Houthi rebels has crippled the country? Al-Rimi was named AQAP leader after his predecessor, Nasir al-Wuhayshi, was killed in a U.S. drone strike on Yemen in June 2015. He was one of the group's founders in 2009 and its first military commander.

The United States killed the leader of Al Qaeda's affiliate in Yemen, the White House confirmed on Thursday. The confirmation came about a week after The New York Times first reported that the United States believed it had killed Qassim al-Rimi, the Qaeda leader, in January after months of tracing him. The C.I.A. carried out the airstrike using an unmanned drone, an intelligence official said. The White House statement had little detail about the operation, but said it was carried out at the direction of President Trump. The statement said Mr. al-Rimi's death will degrade the Yemen affiliate and the global Qaeda movement and "brings us closer to eliminating the threats these groups pose to our national security." 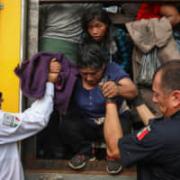 WASHINGTON – The United States said new evidence and analysis of weapons debris recovered from an attack on Saudi oil facilities on Sept. 14 indicates the strike likely came from the north, reinforcing its earlier assessment that Iran was behind the offensive. In an interim report of its investigation -- seen by Reuters ahead of a presentation on Thursday to the United Nations Security Council -- Washington assessed that before hitting its targets, one of the drones traversed a location approximately 200 km (124 miles) to the northwest of the attack site. "This, in combination with the assessed 900 kilometer maximum range of the Unmanned Aerial Vehicle (UAV), indicates with high likelihood that the attack originated north of Abqaiq," the interim report said, referring to the location of one of the Saudi oil facilities that were hit. It added the United States had identified several similarities between the drones used in the raid and an Iranian designed and produced unmanned aircraft known as the IRN-05 UAV. However, the report noted that the analysis of the weapons debris did not definitely reveal the origin of the strike that initially knocked out half of Saudi Arabia's oil production.

The effectiveness of machine learning algorithms depends on the qua lity and amount of data and the operationalization and interpretation by the human analyst . In humanitarian response, data is often lacking or overburdening, thus ambiguous, and t he time - scarce, volatile, insecure environments of humanitarian activities are likely to inflict cognitive biases. This paper proposes to research the effects of data ambiguity and cognitive biases on the interpretability of machine learning algorithms in humanitarian decision making .