The top official at the United States space agency NASA has said the country plans to test a spacecraft engine powered with nuclear fission by 2027, an advancement seen as key to long-haul missions including a manned journey to Mars. NASA will partner with the US military's Defense Advanced Research Projects Agency (DARPA) to develop the nuclear thermal propulsion engine and launch it into space, NASA administrator Bill Nelson said on Tuesday. The project has been named the Demonstration Rocket for Agile Cislunar Operations or DRACO. "With the help of this new technology, astronauts could journey to and from deep space faster than ever – a major capability to prepare for crewed missions to Mars," Nelson said in a statement. The announcement comes amid a new nuclear space race between the US, Russia and China, with the three superpowers working to expand their extraterrestrial nuclear capabilities, including for use propelling spacecraft and powering colonies on the moon.

Machine Hallucinations -- Space: Metaverse is a breathtaking collection from digital media artist Refik Anadol. It includes richly diverse artworks inspired by his studio's collaboration with NASA JPL which began in early 2018, and his long-term research into the photographic history of space exploration. Using advanced machine learning algorithms trained specifically on photographs of deep space captured by satellites and spacecrafts throughout humanity's quest to explore its depths, Anadol creates mesmerizing visual speculations of the unknown. The works explore our fascination with the subject while unveiling intricate connections between obscurity and openness through both digital and physical mediums. Studying the visuals that have been captured by the most comprehensive machines sent to outer space inspired Anadol to contemplate the idea that telescopes keep visual travel journals of spaces where humans cannot yet travel.

Veteran NASA astronaut Tom Jones recaps the historic Artemis I mission after the Orion capsule made a successful return to earth and outlines what this means for the lunar return program. The Habitable Worlds Observatory was announced Monday at the latest American Astronomical Society meeting, and its goal is searching for signs of life on habitable exoplanets. Space.com said on Friday that the observatory will need a powerful coronograph, which is an instrument that allows scientists to study faint objects. Mark Clampin, the director of NASA's astrophysics division, reportedly said that the agency would approach the project as if it faced a strict launch window, building on previous technology used for the Nancy Grace Roman Space Telescope as well as Webb. FILE - In this April 13, 2017, photo provided by NASA, technicians lift the mirror of the James Webb Space Telescope using a crane at the Goddard Space Flight Center in Greenbelt, Maryland.

Old NASA satellite may crash to Earth from space on Sunday 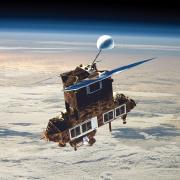 A vintage 1980s space satellite is about to make a comeback, but not in the way that Zoomers have treasured acid-wash mom jeans. A dead 5,400-pound piece of NASA equipment will soon re-enter the atmosphere after nearly four decades of orbiting Earth. Most of the spacecraft will be incinerated, according to the space agency, but some bits will likely crash to Earth or drop in an ocean. When it will return depends on whom you ask. The U.S. military has predicted it will fall at 6:40 p.m. ET Sunday, Jan. 8, 2023, give or take 17 hours.

After nearly four decades in space, NASA's retried Earth Radiation Budget Satellite (ERBS) is about to fall from the sky. On Friday, the agency said the likelihood of wreckage from ERBS harming anyone on Earth is "very low." NASA expects most of the 5,400-pound satellite will burn up upon re-entry. Earlier this week, the Defense Department predicted ERBS would re-enter the Earth's atmosphere on Sunday at approximately 6:40PM ET, give or take 17 hours. While it may be a household name, the Earth Radiation Budget Satellite had anything but a dull history.

After almost four decades in space, a retired NASA satellite is about to fall to earth. The chances of falling satellite debris posing a risk to "anyone on Earth is very low", NASA said in a statement on Saturday. Most of the 2,450kg (5,400lb) satellite will burn up on re-entry but some pieces are expected to survive, according to NASA. The United States space agency put the odds of injury from falling debris at about one-in-9,400. The science satellite is expected to come down on Sunday night at approximately 18:40 EST (23:40 GMT), give or take 17 hours, according to the US defence department.

As the smartwatch market continues to grow, brands are forced to come up with innovative ways to make their new smartwatches stand out. At CES, Citizen did exactly that with its newest CZ Smartwatch, which harnesses AI and NASA research to measure your fatigue and alertness. The power of the watch is found in the CZ Smart YouQ application, which allows individuals to understand and predict fatigue patterns as well as receive tips on how to improve those patterns for a healthier, more alert, and rested lifestyle. Find all the exciting innovation from CES 2023 in this ZDNET special feature. Wearers can take a customized Alert Monitor test daily on the CZ Smart YouQ application to determine their awareness.

As the smartwatch market continues to grow, brands are forced to come up with innovative ways to make their new smartwatches stand out. At CES, Citizen did exactly that with its newest CZ Smart watch, which harnesses AI and NASA research to measure your fatigue and alertness. The power of the watch is found in the CZ Smart YouQ application, which allows individuals to understand and predict fatigue patterns as well as receive tips on how to improve those patterns for a healthier, more alert and rested lifestyle. Find all the exciting innovation from CES 2023 in this ZDNET special feature. Wearers can take a customized Alert Monitor test daily on the CZ Smart YouQ application to determine their awareness.

10 most memorable robotics stories of 2022 - The Robot Report

The robotics industry had its fair share of memorable moments in 2022. Here we take a look back at our picks for the most memorable robotics stories of the year. The list is comprised of moments that made us laugh and cringe, as well as moments that left us surprised or amazed at the capabilities of various robots. Please let us know in the comments what you'll remember most from 2022. Subscribe to The Robot Report Newsletter to stay updated on the robotics stories you need to know about.