The brain of a human being is far beyond what any machine is currently capable of. While it's true that a computer can perform millions of calculation much faster than the human brain, humans can perform much more complex activities like showing emotions, balancing their bodies in highly difficult terrains, and adapting to changing environments and times. Artificial Intelligence (AI) tries to bridge the gap between what the human brain and a computer can do. One of the most successful outcomes of this, is the humanoid robot -- Sophia [1], created by Hanson Robotics. Hanson Robotics' most advanced human-like robot, Sophia, personifies our dreams for the future of AI.

Is AI a species-level threat to humanity?

How dangerous will artificial general intelligence (aka super intelligence) really be? It depends on who you ask. Elon Musk believes unregulated AI will kill us all, while Steven Pinker asks us not to assume all intelligence is evil and callous, and suggests safeguards can prevent the worst-case scenario. In this video, Elon Musk, Steven Pinker, Michio Kaku, Max Tegmark, Luis Perez-Breva, Joscha Bach and Sophia the Robot herself all weigh in on the debate.

Why is AI female? How our ideas about sex and service influence the personalities we give machines

Consider the artificially intelligent voices you hear on a regular basis. Are any of them men? Whether it's Apple's Siri, Microsoft's Cortana, Amazon's Alexa, or virtually any GPS system, chances are the computerized personalities in your life are women. This gender imbalance is pervasive in fiction as well as reality. Films like "Her" and "Ex Machina" reflect our anxieties about what intelligent machines mean for humanity.

Sophia is not AGI (Ben Goertzel)

Ben Goertzel is one of the most interesting minds in the artificial intelligence community. He is the founder of SingularityNET, designer of OpenCog AI framework, formerly a director of the Machine Intelligence Research Institute, Chief Scientist of Hanson Robotics, the company that created the Sophia Robot. He has been a central figure in the AGI community for many years, including in the Conference on Artificial General Intelligence. Subscribe to this YouTube channel or connect on: - Twitter: https://twitter.com/lexfridman

From mythology to machine learning, a history of artificial intelligence

From helping in the global fight against Covid-19 to driving cars and writing classical symphonies, artificial intelligence is rapidly reshaping the world we live in. But not everyone is comfortable with this new reality. The billionaire tech entrepreneur Elon Musk has referred to AI as the "biggest existential threat" of our time. With recent scientific studies testing the technology's ability to evolve on its own, every step in its development throws up new concerns as to who is in control and how it will affect the lives of ordinary people. Here are 9 important milestones in the history of AI and the ethical concerns that have long loomed over the field. 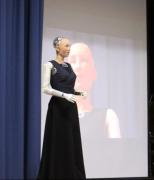 Sophia, the world's most advanced human-like robot participated in the Timberlane Middle School science fair and Family Fun Night to promote STEM education last Saturday. It was Sophia's first time attending a school science fair as a guest and her creator, Hanson Robotics, expressed gratitude to Hopewell Valley for the kind invitation and for showing innovative thinking by including Sophia in this year's activities. Sophia was created by combining innovations in science, engineering, and artistry. She is a framework for robotics and artificial intelligence ("AI") and research, and an agent for exploring the human-to-robot experience in service and entertainment applications. Sophia has also become a much sought-after media personality, helping to advocate for AI research and the role of robotics and AI in our lives.

As artificial intelligence continues to mature, we are seeing a corresponding growth in sophistication for humanoid robots and the applications for digital human beings in many aspects of modern-day life. To help you see the possibilities, we have pulled together some of the best examples of humanoid robots and where you might see digital humans in your everyday life today. Even though the earliest form of humanoid was created by Leonardo Da Vinci in 1495 (a mechanical armored suit that could sit, stand and walk), today's humanoid robots are powered by artificial intelligence and can listen, talk, move and respond. They use sensors and actuators (motors that control movement) and have features that are modeled after human parts. Whether they are structurally similar to a male (called an Android) or a female (Gynoid), it's a challenge to create realistic robots that replicate human capabilities.

VARANASI: The residents of Varanasi will have a brush with the amazing creation of science as they get a chance to meet the humanoid robot, Sophia, at IIT-BHU's annual techno-management fest, Technex, being organised from February 14 to 16. Dean of students Prof B N Rai told reporters on Wednesday, "A special guest talk by the only humanoid robot, Sophia, would be a big draw at the fest this year." Interestingly, Sophia, the first robot capable of expressing human-like emotions that distinguishes her from any other humanoid robots, was activated on February 14, 2016 and will hence be celebrating her fourth birthday at Technex in a way. Sophia, developed by Hong Kong-based Hanson Robotics, became the first robot to receive citizenship of any country when became a Saudi Arabian citizen in October 2017. It can display more than 60 facial expressions.

Last June at the International Forum on Women's Brain and Mental Health organized by the Women's Brain Project (WBP) in Zurich, Switzerland, there was a very special guest: Sophia the Advanced Humanoid Robot from Hanson Robotics. Sophia the Advanced Humanoid Robot participated in the last panel of the Forum "Leveraging AI to address gender bias", moderated by Nicoletta Iacobacci. Here, we are thrilled to share a selection of the "hot off the press" video footage of this event. Mara Hank Moret is a philanthropist and WBP supporter. In her conversation with Sophia, topics from gender identification to the importance of empathy, women in AI, and how to integrate diversity in data to avoid systemic biases are covered.

Revolutionizing IoT Through AI: Why They're Perfect Together

The IoT global market revenue will reach approximately USD 1.1 trillion by 2025, predicts IDC. IDC also says that the global IoT connections will rise with a 17 percent Compound Annual Growth Rate (CAGR) from 7 billion to 25 billion between the years 2017 to 2025. Back in 2018, Sophia a humanoid robot performed a duet with Jimmy Fallon at his show. This performance left the audience awestruck. The entire world was spellbound of how Sophia (humanoid robot) could showcase human emotion while performing the song.