Harnessing artificial intelligence and machine learning technologies has become the new arms race among the great powers, a Hudson Institute panel on handling big data in military operations said Monday. Speaking at the online forum, Richard Schultz, director of the international security program in the Fletcher School at Tufts University, said, "that's the way [Russian President Vladimir] Putin looks at it. I don't think we have a choice" but to view it the same way. He added in answer to a question that "the data in information space is enormous," so finding tools to filter out what's not necessary is critical. U.S. Special Operations Command is already using AI to do what in the old days was called political or psychological warfare, in addition to targeting, he added.

Fox News correspondent Lucas Tomlinson has the details from the Pentagon on'Special Report' Russian President Vladimir Putin inspected the country's newly unveiled "Checkmate" warplane on Tuesday. The prototype of the Sukhoi fifth-generation stealth fighter was revealed at the MAKS-2021 International Aviation and Space Salon, Reuters reported. The show opened Tuesday in Zhukovsky, outside Moscow. Fifth-generation refers to the jet's stealth characteristics, a capability to cruise at supersonic speed as well as artificial intelligence to assist the pilots, among other advanced features. "What we saw in Zhukovsky today demonstrates that the Russian aviation has a big potential for development and our aircraft making industries continue to create new competitive aircraft designs," Putin said in a speech at the show.

TBILISI, July 5 (Thomson Reuters Foundation) - (Editor's note: contains offensive language and terms of racial abuse) From scanning residents' faces to let them into their building to spotting police suspects in a crowd, the rise of facial recognition is accompanied by a growing chorus of concern about unethical uses of the technology. A report published on Monday by U.S.-based researchers showing that Russian facial recognition companies have built tools to detect a person's race has raised fears among digital rights groups, who describe the technology as "purpose-made for discrimination." Developer guides and code examples unearthed by video surveillance research firm IPVM show software advertised by four of Russia's biggest facial analytics firms can use artificial intelligence (AI) to classify faces based on their perceived ethnicity or race. There is no indication yet that Russian police have targeted minorities using the software developed by the firms - AxxonSoft, Tevian, VisionLabs and NtechLab - whose products are sold to authorities and businesses in the country and abroad. But Moscow-based AxxonSoft said the Thomson Reuters Foundation's enquiry prompted it to disable its ethnicity analytics feature, saying in an emailed response it was not interested "in promoting any technologies that could be a basis for ethnic segregation".

An AI arms race is already underway. That's the reality we have to deal with," Maas told DW, speaking in a new DW documentary, "Future Wars -- and How to Prevent Them." "This is a race that cuts across the military and the civilian fields," said Amandeep Singh Gill, former chair of the United Nations group of governmental experts on lethal autonomous weapons. "This is a multi-trillion dollar question." This is apparent in a recent report from the United States' National Security Commission on Artificial Intelligence. It speaks of a "new warfighting paradigm" pitting "algorithms against algorithms," and urges massive investments "to continuously out-innovate potential adversaries." And you can see it in China's latest five-year plan, which places AI at the center of a relentless ramp-up in research and development, while the People's Liberation Army girds for a future of what it calls "intelligentized warfare." As Russian President Vladimir Putin put it as early as 2017, "whoever ...

Steering the governance of artificial intelligence: national strategies in perspective Artificial intelligence (AI) is the new terrain of contestation in international relations, wrapped in uncertainty about loss of technological control and human oversight. 'Whoever becomes the leader in this sphere will become the ruler of the world', Russian President Vladimir Putin famously stated in 2017 (RT, 2017). Since then, a plethora of public and private actors have issued statements on how AI would change society for the better or for the worse, highlighting infrastructural developments, military applications and impact on jobs and human relations. Some of these statements revealed concrete plans to address AI-related challenges, but the majority remained principled positions on limiting risks associated with disruptive technologies (Ulnicane et al., 2020, Jobin et al., 2019). As recognition grows that tools based on algorithmic processing and machine learning bring about as many promises as commotions, governments are under increased pressure to react for the wellbeing of their citizens and for their raison d'être (Taeihagh, 2021).

A warning to DoD: Russia advances quicker than expected on AI, battlefield tech

The Russian military is more technologically advanced than the U.S. realized and is quickly developing artificial intelligence capabilities to gain battlefield information advantage, an expansive new report commissioned by the Pentagon warned. The federally funded Center for Naval Analyses examined the Kremlin's whole-of-government approach for artificial intelligence development and found it is largely driven by the perceived threat from the United States, combined with lessons learned from its continuing conflicts in Syria and Ukraine about what the future battlefield will look like, the report released Monday said. However, the Russian government faces limitations because its AI efforts are primarily government funded, and it lacks a strong defense industrial base, noted the report, written on behalf of the Pentagon's Joint Artificial Intelligence Center. Still, analysts cautioned Pentagon leadership not to underestimate the Russia's technological advances as the U.S. pivots its strategic focus to the Indo-Pacific. The Russian military has been undergoing modernization since 2009.

Russia is building an army of robot weapons, and China's AI tech is helping

Russia is developing an array of autonomous weapons platforms utilizing artificial intelligence as part of an ambitious push supported by high-tech cooperation with neighboring China. The extent to which Russia has prioritized AI in modernizing its military was featured in a report entitled "Artificial Intelligence and Autonomy in Russia," which was published Monday by the CNA nonprofit research and analysis group located in Arlington, Virginia. The report's authors worked closely with the Pentagon's Joint Artificial Intelligence Center to produce what the organization called "the first major piece of US research that articulates contemporary Russia's main initiatives, achievements, and accomplishments in AI and autonomy efforts and places those initiatives within the broader technological landscape in Russia." "Russian military strategists have placed a premium on establishing what they refer to as'information dominance on the battlefield,'" the report stated, "and AI-enhanced technologies promise to take advantage of the data available on the modern battlefield to protect Russia's own forces and deny that advantage to the adversary." While there are significant challenges and some reservations toward ceding critical decision-making capabilities to artificial intelligence and away from human minds, trends clearly signal that Russian efforts to introduce these advanced capabilities are well underway.

Russia Is Accelerating Its Own Link-Everything Network 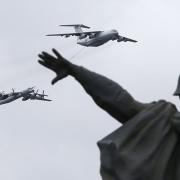 The United States isn't the only major military power trying to digitally link all of its weapons and execute operations faster with artificial intelligence. Russia has been making gains in its own version of centralized command and control across land, sea, space, and cyberspace, according to a new paper from a Navy-linked think tank. Over the past several years, Russian military leaders have steadily advanced an AI-linked concept called automated control systems, or ACS, says the paper, to be published Monday by the Center for Naval Analysis, or CNA. The Russian military's encyclopedia describes it as: "A system that automates such processes or functions of command and control of troops and (or) weapons (combat assets) such as: collection, processing, storage and delivery of information necessary to optimize command and control of troops and weapons." The concept bears an uncanny resemblance to the U.S. military's own vision for AI-fueled, network-centric operations.

Russia seems to actively explore innovative technologies. Now, the country wants to implement the means of artificial intelligence for pilotless aircraft. For this matter, Russia plans on establishing a special department for studying the technology. The move to use AI was unveiled by the Russian Ministry of Defense during the visit to Sukhoi's design bureau. The delegation included the First Deputy Chairman of the Military Industrial Commission (MIC) Andrey Yelchaninov and other members of the MIC.

Artificial Intelligence is the Key to Economic Recovery - Forbes Israel The Covid-19 vaccine may end the Corona pandemic faster than we thought. However, we must not forget the economic crisis caused by certain countermeasures (like lockdowns, quarantines etc.) that were taken everywhere (almost) globally, including in Israel. We believe that in order to to accelerate the required economic recovery and to emerge from the crisis with a relative advantage in the post-Corona global race, we need to promote aggressively Artificial Intelligence (AI) technology. AI should stand at the center of Israel next technological revolution, in order to serve as the locomotive of fast economic growth. The global race for technological superiority in the information age has begun long before the Pandemic. However, the pandemic emphasized our dependence on fast computerized communications, and the increase in the demand for using the internet, social networks, Zoom etc., empowered with AI capabilities, is undoubtable.