A guide to Robotic Process Automation 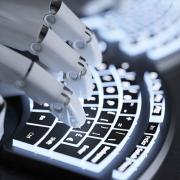 Robot-led automation has the potential to transform today's workplace as dramatically as the machines of the Industrial Revolution changed the factory floor. Both Robotic Process Automation (RPA) and Intelligent Automation (IA) have the potential to make business processes smarter and more efficient, in very different ways. Both have significant advantages over traditional IT implementations. Robotic process automation tools are best suited for processes with repeatable, predictable interactions with IT applications. These processes typically lack the scale or value to warrant automation via IT transformation.

Robotic Process Automation (RPA) uses software robots on a physical or virtual machine. It has a defined set of instructions for the robots or bots to follow. RPA bots are capable of stimulating most human-computer interactions. These bots carry out thousands of tasks without a single error and at high volume and speed. Pro bots: Follows simple and repetitive commands to process data.

RPA Use Cases in Retail and E-commerce Industry

The retail sector has witnessed a huge change since the turn of the century. What once was considered a hit is no more in vogue or even makes sense. The way people shop has seen a swift shift and organizations that really want to stay at the top of their game better shift as swiftly. There are multiple factors which are influencing this wave of change. To help businesses stay afloat and thrive, we bring to you this blog on RPA use cases in retail and E-commerce industry, which will help you understand why your business needs the expert assistance of RPA or robotic process automation today.

The robots are coming for your office

As the editor-in-chief of The Verge, I can theoretically assign whatever I want. However, there is one topic I have failed to get people at The Verge to write about for years: robotic process automation, or RPA. RPA isn't robots in factories, which is often what we think of when it comes to automation. This is different: RPA is software. Software that uses other software, like Excel or an Oracle database. On this week's Decoder, I finally found someone who wants to talk about it with me: New York Times tech columnist Kevin Roose. His new book, Futureproof: 9 Rules for Humans in the Age of Automation, has just come out, and it features a lengthy discussion of RPA, who's using it, who it will affect, and how to think about it as you design your career. What struck me during our conversation were the jobs that Kevin talks about as he describes the impact of automation: they're not factory workers and truck drivers. If you have the kind of job that involves sitting in front of a computer using the same software the same way every day, automation is coming for you. It won't be cool or innovative or even work all that well -- it'll just be cheaper, faster, and less likely to complain. That might sound like a downer, but Kevin's book is all about seeing that as an opportunity. You'll see what I mean. Okay, Kevin Roose, tech columnist, author, and the only reporter who has ever agreed to talk to me about RPAs. This transcript has been lightly edited for clarity. Kevin Roose, you're a tech columnist at The New York Times and you have a new book, Futureproof: 9 Rules for Humans in the Age of Automation, which is out now. Thank you for having me. You're ostensibly here to promote your book, which is great. But there's one piece of the book that I am absolutely fascinated by, which is this thing called "robotic process automation." And I'm gonna do my best with you on this show, today, to make that super interesting. But before we get there, let's talk about your book for a minute. What is your book about? Because I read it, and it has a big idea and then there's literally nine rules for regular people to survive. So, tell me how the book came together. So, the book is basically divided into two parts.

RPA can automate and digitize the repetitive processes typically performed by human operators, and it is proving increasingly popular in the business world.

Top Robotics Jobs to Apply for in March 2021

A few decades back, robotics was science fiction and anything related to robotics, including job opportunities were seen as a thing of the future. Now, the future is here by changing robotic science fiction into science fact. The robotic industry is opening top robotic jobs from across the globe. Robotics is a branch of engineering, which deals with the making and managing of robots and robotic process automation. Robots are programmed machines that carry out tasks autonomously to streamline the routine process.

Founder and CEO of PurchaseControl, with decades of international experience in Procurement, Spend Management, and Technology. Often, discussions concerning digital transformation in modern enterprise focus primarily on virtual tools driven by artificial intelligence -- e.g., robotic process automation, data digitization and analytics, machine learning, etc. However, in considering the ways in which procurement professionals can build value and create savings for their organizations through digital transformation, we must also consider the technologies connecting that transformation to the physical world via Industry 4.0. The idea of Industry 4.0 comes from the broader notion of the Fourth Industrial Revolution (4IR). Building upon its predecessors, 4IR introduced new technologies -- automation, digitalization, artificial intelligence, cloud computing -- that fundamentally transformed work, life and play for billions of people.

Insight from the field: Key legal industry initiatives for 2021

While 2020 showed that the best-laid plans can be quickly thrown for a loop, it also proved that there is an adaptability in the legal industry that few believed really existed. We don't want to jinx 2021, but we're starting to feel like it's "safe" to start making plans again, taking the lessons learned and changes made in 2020 and applying them to strategic efforts. To get a sense of where the legal industry is focused for 2021, we took some time to talk to professionals in various roles to hear what their strategic plans include for this year. We learned of three major initiatives that organizations across the legal industry will focus on. Long known as the department of "no's" focused on mitigating risks, legal teams will have the chance to re-position themselves as facilitators of commerce.

Why Robotic Process Automation (RPA) is Taking Over Your Job - Technext

There have been predictions that Robots will take over our jobs. As of today, that prediction is rapidly coming to pass. Our imagination may tell us these robots are hardware, machines made of metal or carbon fibre. This is not quite the case, as these Robots are software called bots. Bots are programmed to repetitively automate operational and transactional tasks without the need for human input.