The House of Commons will vote next week on Theresa May's amended Brexit deal. Ahead of this, MPs are beginning to submit their own amendments. Among the proposals so far are those aimed at: preventing a no-deal Brexit; extending the Article 50 deadline if a deal isn't agreed by 26 February; looking at options including renegotiating with Brussels or holding another referendum. On Monday, the prime minister said she was focusing on altering the Irish backstop, and that she was scrapping proposals for a £65 fee for EU citizens to remain in the UK. But Labour's Jeremy Corbyn argued that Mrs May was in denial about the level of opposition to her plans.

The Papers: Concerns about NHS on front pages

The head of the NHS in England, Simon Stevens, is in the news this morning. According to the Times, five million patients a month are waiting more than three weeks to see their GP. And the paper says 1,000 fewer family doctors are in post than when ministers pledged to recruit an extra 5,000 in 2015. Mr Stevens' plan for joined up care to keep patients out of hospital "relies on beefed-up GP surgeries offering more treatment and co-ordination locally, but despite extra money, £20,000 'golden hellos' and overseas recruitment drives, numbers continue to fall", the Times adds. Meanwhile, Mr Stevens is said to be at loggerheads with Downing Street, the Treasury and Department of Health and Social Care about how much his long-term plan for the health service can promise to boost care.

Controversial data mining company collected information on at least 87 million Facebook users. LONDON -- Cambridge Analytica created its own Facebook quizzes and questionnaires to collect reams of data on users using the social networking giant, according to a former senior official at the data mining company. Brittany Kaiser, the former director of program development at Cambridge Analytica, told British lawmakers on Tuesday that the company, which is at the center of a broader Facebook data scandal, widely used such practices, including a "sex compass" quiz, to garner insight on people's online habits. These data-collection strategies made it highly likely that more people's Facebook data had been collected without their knowledge than previously thought, according to Kaiser. Cambridge Analytica is already accused of using a third-party app created by Aleksandr Kogan, a Cambridge University professor, to collect online information on up to 87 million Facebook users.

Comparison Between Global Vs Local Normalization of Tweets, and Various Distances 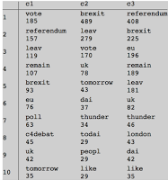 In the previous example we used clustering to see if an apparent pattern exists within Brexit tweets. We found out that we have three distinct patterns, the leave, the referendum, and Brexit. This in itself helps us think that we may even create a classifier that can identify if the tweet writer is pro or agains an issue automatically, with no human intervention. Let's get back to the issues related to clustering. To use the clustering algorithm we had to map 2 tweets at the time to a binary vector.

Low voter turnout invalidated Hungary's referendum on European Union refugee quotas, even though citizens voted overwhelmingly in support of the government's opposition to any future, mandatory EU plans to relocate asylum seekers. The government claimed a "sweeping victory," but analysts said that the result was an "embarrassing but not totally catastrophic defeat" for Prime Minister Viktor Orban. "We can be proud that we are the first and so far only member state of the European Union" to hold such a referendum, Orban told supporters after the results were known. "Hungarians were able to give their direct opinions on the issue of immigration." Orban, who did not mention that the referendum was officially invalid, said he would present a proposal to amend the constitution reflecting people's intentions.

BEIJING – Finance officials of major economies pledged Sunday to boost sluggish global growth but announced no joint initiatives and promised to defend against the shockwaves of Britain's vote to leave the European Union. In a joint statement after a two-day meeting, envoys of the Group of 20 also rejected trade protectionism, an issue that has risen in prominence as U.S. Republication presidential candidate Donald Trump has talked about restricting access to American markets. The United States, China, Britain, Germany and other governments at the meeting in Chengdu in western China pledged to use spending, monetary policy and regulatory reforms to strengthen growth. They promised to strengthen communication and cooperation but announced no joint action, as some financial traders had hoped. "We are taking action to boost confidence and promote growth," said the statement.

Queen Elizabeth II donned an ermine-trimmed robe and diamond-studded crown Wednesday to announce government promises to put Britain at the cutting edge of technology and social progress in the 21st century. Plans for prison reform, a sugar tax and commercial spaceports were among 21 bills announced in the Queen's Speech, an annual tradition that mixes lavish pomp and modern politics. Prime Minister David Cameron called it a "progressive, one-nation" program, but some measures are sure to meet resistance -- and next month's referendum on European Union membership is casting a shadow over the government's plans. The annual State Opening of Parliament is steeped in centuries-old symbolism of the power struggle between Parliament and the British monarchy. In a display of regal wealth and finery, the queen traveled from Buckingham Palace in the horse-drawn Diamond Jubilee State Coach, and delivered the speech -- written for her by the government -- wearing the Imperial State Crown, studded with 3,000 diamonds.