Games, Mysteries, and the Lure of QAnon

QAnon is so sprawling, it's hard to know where people join. One week, it's the false rumor that 5G cell towers spread disease, another week it's Wayfair.com But QAnon's millions of followers often seem to begin their journey with the same refrain: "I've done my research." If you buy something using links in our stories, we may earn a commission. This helps support our journalism. 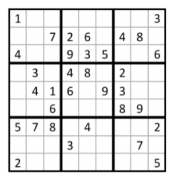 Originally published on Towards AI the World's Leading AI and Technology News and Media Company. If you are building an AI-related product or service, we invite you to consider becoming an AI sponsor. At Towards AI, we help scale AI and technology startups. Let us help you unleash your technology to the masses. Sudoku is a logic-based puzzle that first appeared in the U.S. under the title "Number Place" in 1979 in the magazine Dell Pencil Puzzles & Word Games [6].

Welcome to AI book reviews, a series of posts that explore the latest literature on artificial intelligence. In recent years, deep learning has taken great strides in some of the most challenging areas of artificial intelligence, including computer vision, speech recognition, and natural language processing. However, some problems remain unsolved. Deep learning systems are poor at handling novel situations, they require enormous amounts of data to train, and they sometimes make weird mistakes that confuse even their creators. Some scientists believe these problems will be solved by creating larger and larger neural networks and training them on bigger and bigger datasets.

What is Computer Vision? How Does it Work?

Computer vision is a branch coming under AI, that permits computers and systems to derive meaningful information from digital images, video, and other visual input – and take actions or make recommendations based on that information. Now that AI permits computers to think, computer vision empowers them to see and perceive. On account of breakthroughs in artificial intelligence and renovation in deep learning and neural networks, the field has been able to take great surges in recent years and has been able to transcend humans in some tasks connected to detecting and labeling objects. One of the defining factors behind the growth of computer vision is the sum total of data we produce today that is then used to train and make computer vision better. Computer vision is utilized in industries lining up from energy and utilities to manufacturing and automotive – and the market for computer vision is blooming.

Venba, a video game about the emotional resonance of food

Food is much more than mere sustenance. Venba isn't so much a cooking game as it is a game about cooking – a narrative puzzle about restoring an old cookbook that made its way into the titular character's hands. Venba is a Tamil woman who left India for Canada with her husband to start over; they're already thinking about leaving when she gets the news of her pregnancy. The very first dish you make in the game, a savoury rice cake called idli, becomes a way for Venba to break the news to her husband, a clever way to show how food can be part of any memory. "Regardless of what's happening on any particular day, the kitchen is always busy in south Asian homes," says the lead designer, who goes by the name Abhi.

In January 2020, players of Nintendo's The Legend of Zelda: Ocarina of Time stumbled on a buried spaceship: a fully functional "Arwing" fighter from another classic Nintendo game, Star Fox 64. The Arwing was added as a programmer's shortcut to, essentially, teach a dragon how to fly. Once the dragon was airborne, the ship was hidden away in Ocarina of Time's source code, where hackers unearthed it 22 years later. "It's amazing to me that it was there all this time – it just took a lot of digging to find it," says Billy Basso, a game developer from Chicago. "It's completely inessential, but it helps people bond with how games are made, the creators behind them and the time and place. It connects you to history in a way."

It has since been updated to include the most relevant information available.] Alan Turing, the genius who cracked the Enigma code and helped end World War II, has just introduced a novel concept. It's called the "Turing Test," and it's aimed at answering the fundamental question: Can machines think? Machines -- think for themselves? This research is conducted in the world's most prestigious labs by some of the world's smartest people.

AlphaFold reveals the structure of the protein universe To read about all our work on solving protein folding, go to deepmind.com/AlphaFold It's been one year since we released and open sourced AlphaFold, our AI system to predict the 3D structure of a protein just from its 1D amino acid sequence, and created the AlphaFold Protein Structure Database (AlphaFold DB) to freely share this scientific knowledge with the world. Proteins are the building blocks of life, they underpin every biological process in every living thing. And, because a protein's shape is closely linked with its function, knowing a protein's structure unlocks a greater understanding of what it does and how it works. We hoped this groundbreaking resource would help accelerate scientific research and discovery globally, and that other teams could learn from and build on the advances we made with AlphaFold to create further breakthroughs.

Few things are more important in art than understanding your subject. Stray is a fun and charming little adventure that follows an ordinary orange tabby cat as it tries to navigate (and eventually escape) from a cyberpunk city with a mysterious lack of humans and a quirky robot population. It's gorgeous to look at, has a funky industrial synth soundtrack, and manages to tell a dystopian story that's equal parts bleak and hopeful. That stuff is all fine and good, but it's secondary to the part where yo this game is about a cat. As a lifelong cat lover who also appreciates a compelling sci-fi narrative, Stray felt tailor-made for my tastes. I'm pleased to report that this game makes the most out of its material by fully grasping what it is that makes these enigmatic creatures so beloved as pets and internet icons.

Despite the fact that it stars a cat, there's no extra fluff in Stray. The game takes place under the dome of an artificial sky, in a futuristic city populated by robots and cut off from the natural world, and mechanically, it's also perfectly contained. Every detail in Stray serves a purpose, whether it's an environmental cue nudging players toward a specific path or the ability to meow at will, which is adorable, but can also distract enemies in combat scenes. Stray is a cyberpunk playground where players are rewarded for trusting their instincts, and it offers a beautiful balance of exploration, puzzle solving and soothing cat activities. And somehow along the way, it manages to tell a heart-wrenching human story without any people at all.