Last Thursday, NASA's Perseverance rover grabbed headlines all around the world, with its historic landing on the Martian surface. The rover, which was launched July 30, 2020, from the Cape Canaveral Air Force Station in Florida atop a ULA Atlas 541 rocket, finally made touched down at 3.44pm ET (8.44pm GMT). The mission objective is to search for signs of ancient life and to collect rock and soil samples for possible return to Earth – where it will be scanned for presence of microbial life. The name Perseverance was given by Alex Mather, who won a K-12 public naming contest with 28,000 entries. Named after the human characteristic, the mission follows similar name-scheme of its predecessors: Curiosity, Spirit and Opportunity. The rover made a touch down at an ancient river delta site in Jezero Crater.

Like any good piece of high-tech hardware, NASA's Perseverance rover features an Easter egg hidden in plain sight. Since landing on Mars on February 18th, NASA has been sharing thousands of photos captured by the rover. And if you look close enough, as Space did, you'll catch a decal bolted to the top of its body. That decal depicts Perseverance and every single other NASA rover to successfully make it to the surface of Mars. This plaque I carry pays tribute to those who've gone before me, and to new possibilities ahead. 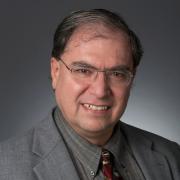 Dr. Kirk Borne is the Principal Data Scientist and an Executive Advisor at global technology and consulting firm Booz Allen Hamilton based in McLean, Virginia USA (since 2015). In those roles, he focuses on applications of data science, data analytics, data mining, machine learning, machine intelligence, and modeling across a wide variety of disciplines. He also provides leadership and mentoring to multi-disciplinary teams of scientists, modelers, and data scientists; and he consults with numerous external organizations, industries, agencies, and partners in the use of large data repositories and machine learning for discovery, decision support, and innovation. He previously spent 12 years as Professor of Astrophysics and Computational Science at George Mason University where he did research, taught, and advised students in the Data Science degree programs. Before that, Kirk spent nearly 20 years supporting data systems activities on NASA space science programs, including a role as NASA's Data Archive Project Scientist for the Hubble Space Telescope, contract manager in NASA's Astronomy Data Center, and program manager in NASA's Space Science Data Operations Office.

LOS ANGELES – NASA scientists on Monday unveiled first-of-a-kind home movies from last week's daredevil Mars rover landing, vividly showing its supersonic parachute inflation over the red planet and a rocket-powered hovercraft lowering the science lab on wheels to the surface. The footage was recorded on Thursday by a series of cameras mounted at different angles of the multistage spacecraft as it carried the rover, named Perseverance, through the thin Martian atmosphere to a gentle touchdown inside a vast basin called Jezero Crater. Thomas Zurbuchen, NASA associate administrator for science, called seeing the footage "the closest you can get to landing on Mars without putting on a pressure suit." The video montage was played for reporters tuning in to a news briefing webcast from NASA's Jet Propulsion Laboratory (JPL) near Los Angeles four days after the historic landing of the most advanced astrobiology probe ever sent to another world. NASA also presented a brief audio clip captured by microphones on the rover after its arrival that included the murmur of a light wind gust -- the first ever recorded on the fourth planet from the sun.

Perseverance rover has sent back stunning video and audio from Mars

NASA's Perseverance rover has sent back astonishing video footage of its 18 February landing on Mars. These videos give us the most intimate look ever at the process of setting a spacecraft down on the Martian surface. During the landing, five cameras took videos: two on the back of the capsule holding the rover, one on the sky crane that acted as a jet pack to lower the rover its final 2000 metres or so to the surface and two on the rover itself. The videos show the parachute opening to slow down the spacecraft, and then the heat shield dropping to the surface of Mars once Perseverance is moving slow enough not to need it anymore. "You can get a sense really of how violent that parachute deploy and inflation are," said Al Chen, a Perseverance engineer at NASA's Jet Propulsion Laboratory (JPL) in California, during a press conference.

The helicopter sent to Mars by NASA to explore the Red Planet from the sky has'phoned home' and is working great, according to the space agency. Named Ingenuity, it rode to Mars strapped to the belly of the car-sized Perseverance rover that will trundle along the Jezero crater in search of ancient alien life. NASA mission control in Southern California received the first status report from Ingenuity late on Friday via the space-based Mars Reconnaissance Orbiter. Ingenuity will remain attached the belly of Perseverance for between 30 and 60 days before it detaches and makes its maiden flight - assuming it survives the brutal average -90C overnight temperatures found on the Red Planet. NASA shared an exciting image shot by the sky crane that shows Perseverance, nicknamed Perky, slung beneath and attached to mechanical bridals – moments before making landfall. The downlink confirmed that the helicopter, and an electrical box on the rover that routes and stores communications with Earth, were both performing as expected.

This week, Americans celebrated the successful delivery of NASA's Perseverance rover to its destination on the Martian surface, marking the dawn of a new era of interplanetary exploration. However, when it comes to searching the solar system around us, the US has not always led from the front. During the Reagan administration, for example, the agency saw its budget pared down in favor of building up arms ahead of an anticipated Cold War faceoff with the Soviet Union, as we see in this excerpt from David W Brown's latest work, The Mission. Excerpted from the book THE MISSION: or: How a Disciple of Carl Sagan, an Ex-Motocross Racer, a Texas Tea Party Congressman, the World's Worst Typewriter Saleswoman, California Mountain People, and an Anonymous NASA Functionary Went to War with Mars, Survived an Insurgency at Saturn, Traded Blows with Washington, and Stole a Ride on an Alabama Moon Rocket to Send a Space Robot to Jupiter in Search of the Second Garden of Eden at the Bottom of an Alien Ocean Inside of an Ice World Called Europa (A True Story) 2021 by David W. Brown. For planetary scientists, the Jimmy Carter–Ronald Reagan years were in retrospect like the Dark Ages, and they, the monks tending in enclaves to the embers of civilization.

The Mars Landing Was the Best Thing on TV This Week

The Monitor is a weekly column devoted to everything happening in the WIRED world of culture, from movies to memes, TV to Twitter. Look, it's been a god-awful week. Winter storms have caused power outages and chaos from Oregon to Texas. Reply All cohost PJ Vogt and others stepped down following accusations of a toxic culture at Gimlet Media. Unemployment is still on the rise.

NASA says its Perseverance rover is in'great shape' after successfully landing on the surface of Mars last night after a 239 million-mile journey. The landmark landing shortly before 4pm ET (9pm GMT) was watched live by millions as NASA live streamed the process to millions of eager viewers. The $2.2billion car-sized rover guided itself to a patch of smooth terrain in Jezero, a 28-mile wide and 820ft-deep crater which was home to a Martian lake 3.5 billion years ago. Perseverance, nicknamed Percy, survived the dreaded'seven minutes of terror' which saw it endure temperatures in excess of 2,000 F as it entered the Martian atmosphere at more than 12,000mph. Perseverance beamed back its first image of the crater moments after NASA established radio contact with the rover, leading to raucous applause and joyous scenes at NASA's Californian mission control. Flight controller Swati Mohan announced to relieved colleagues: 'Touchdown confirmed! Perseverance safely on the surface of Mars, ready to begin seeking signs of past life.' 'The good news is the spacecraft, I think, is in great shape,' said Matt Wallace, Deputy Project Manager of Mars 2020. Perseverance will spend the next two Earth years scouring for signs of life in the crater and will perform a host of experiments.

Los Angeles – NASA's science rover Perseverance, the most advanced astrobiology laboratory ever sent to another planet, streaked through the Martian atmosphere on Thursday and landed safely on the floor of a vast crater, its first stop on a search for traces of ancient microbial life on the Red Planet. Mission managers at the U.S. space agency's Jet Propulsion Laboratory near Los Angeles burst into applause, cheers and fist-bumps as radio beacons signaled that the six-wheeled rover had survived its perilous descent and arrived within its target zone inside Jezero Crater, site of a long-vanished Martian lake bed. "Touchdown confirmed," Swati Mohan, the lead guidance and operations specialist announced from the control room. The robotic vehicle sailed through space for nearly seven months, covering 293 million miles (472 million km) before piercing the Martian atmosphere at 12,000 miles per hour (19,000 km per hour) to begin its descent to the planet's surface. Moments after touchdown, Perseverance beamed back its first black-and-white images from the Martian surface, one of them showing the rover's shadow cast on the desolate, rocky landing site.