US Eyes Iran Over Ship 'Hijacking' As Tensions Rise

The United States said Wednesday it suspected Iranian involvement in the alleged hijacking of a ship in the Gulf of Oman as it vowed to work with Britain to respond to an earlier deadly attack it blamed on Tehran. Oman said that the Asphalt Princess, an asphalt and bitumen tanker, was involved in "a hijacking incident in international waters" and that it deployed aircraft and naval ships. The United States and Britain said that the murky incident in the Gulf of Oman concluded after one day, with the alleged hijackers leaving the Panamanian-flagged vessel. "We believe that these personnel were Iranian, but we're not in a position to confirm this at this time," State Department spokesman Ned Price told reporters in Washington. "Iran has undertaken a pattern of belligerence in terms of proxy attacks in the region and of course, these maritime attacks," Price said, while adding that circumstances in the latest incident were "still emerging".

About 20 years ago, a series of coordinated terrorist attacks killed almost 3,000 people in the World Trade Center, New York and at the Pentagon. Since then, a vast amount of research has been carried out to better understand the mechanisms behind terrorism in the hope of preventing future potentially devastating acts of terror. Despite the large efforts invested to study terrorism, quantitative research has mainly developed and applied approaches aiming at describing regional cases of terrorist acts without providing reliable and accurate short-term predictions at local level required by policymakers to implement targeted interventions. Publishing in Science Advances, an international research team led by Dr. Andre Python from the Center of Data Science at Zhejiang University investigate machine learning algorithms capable of predicting and explaining at fine spatiotemporal scale the occurrence of terrorism perpetrated by non-state actors outside legitimate warfare (non-state terrorism) across the world. To cover all regions worldwide potentially affected by terrorism over a large time period, the authors consider about 21 million week cells, which are composed of 26,551 grid cells at 50 km 50 km that cover inhabited areas in the world over a period of 795 weeks between 2002 and 2016.

Fox News Flash top headlines are here. Check out what's clicking on Foxnews.com. An undercover child sex sting in Florida led to the arrests of over a dozen predators, including three Disney World employees and a registered nurse, investigators said Tuesday. In total, 17 people were taken into custody in the operation dubbed "Operation Child Protector" and face a total of 49 felony and two misdemeanor charges, Polk County Sheriff Grady Judd announced during a press conference. Undercover detectives posed as children between the ages of 13 and 14 on social media platforms, mobile apps and online dating sites to investigate child predators from July 27 through Aug. 1.

How To Fool Facial Recognition Systems

"We've developed a new attack on AI-driven facial recognition systems, which can change your photo in such a way that an AI system will recognise you as a different person, in fact as anyone you want," according to Adversa AI's official website. Adversa managed to trick facial recognition search tool PimEyes into misidentifying Vice reporter Todd Feathers as Mark Zuckerberg. Facial recognition for one-to-one identification has become an increasingly popular AI application. But facial recognition technology is not fool-proof. Adversa AI was designed to fool facial recognition algorithms by adding alterations or noise to the original image. 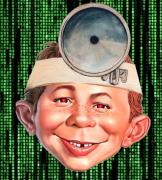 This work licensed under a Creative Commons Attribution 4.0 license. That means you can use it any way you like, including commercially, provided that you attribute it to me, Cory Doctorow, and include a link to pluralistic.net.

Citizen app launches paid service to spy on your phone

Would you pay a subscription for the neighborhood watch app Citizen? On Tuesday, the controversial mobile app which lets users report on local crime and other incidents announced a $19.99 premium service called Citizen Protect that offers 24/7 access to "highly trained safety experts." The premium Protect service, which is now available for iOS, began testing earlier this year with nearly 100,000 beta users. One new feature that particularly stands out allows the company to monitor your smartphone audio using AI-powered technology. The Citizen Protect service is designed to provide customers with a live, human safety expert on-demand.

After months of testing, Citizen, the crime and neighborhood watch app, is releasing Protect, a subscription-based feature that lets users contact virtual agents for help if they feel they're in danger. According to Citizen, the feature can connect users with a Protect agent either through video, audio, or text available around the clock. The company said audio and text-only communication allows users to discreetly call for help "in difficult situations" where they might not be able to or are scared to be seen calling 911. Protect began beta testing earlier this year as the feature has been available to 100,000 users, Citizen said. The new feature comes as Citizen currently has more than 8 million users who have sent out more than billion alerts in major U.S. cities including New York, Los Angeles, Chicago, Atlanta, Houston and the San Francisco Bay Area.

Fake It to Make It: Companies Beef Up AI Models With Synthetic Data

Companies rely on real-world data to train artificial-intelligence models that can identify anomalies, make predictions and generate insights. To detect credit-card fraud, for example, researchers train AI models to look for specific patterns of known suspicious behavior, gleaned from troves of data. But unique, or rare, types of fraud are difficult to detect when there isn't enough data to support the algorithm's training. To get around that, companies are learning to fake it, building so-called synthetic data sets designed to augment training data. At American Express Co., machine-learning and data scientists have been experimenting with synthetic data for nearly two years in hopes of improving the company's AI-based fraud-detection models, said Dmitry Efimov, head of the company's Machine Learning Center of Excellence. The credit-card company uses an advanced form of AI to generate fake fraud patterns aimed at bolstering the real training data.

Use of Artificial Intelligence in Banking World today

AI is evolving on fast pace. Financial organizations are already using AI technologies to identify fraud and unusual transactions, personalize customer service, help make decisions on creditworthiness, using natural language processing on text documents, and for cybersecurity and general risk management. Over the past decades, banks have been improving their methods of interacting with customers. They have tailored modern technology to the specific character of their work. As an example, in the 1960s, the first ATMs were installed, and ten years later, there were already cards for doing transactions and payment.

This article was originally published on November 19, 2020. The technological solutions that countries have implemented to mitigate the spread of Covid-19 have been costly to individual privacy. From advancing facial recognition and contact-tracing apps to state censorship and surveillance measures, there is a sense that these solutions are being tested in real time with the public, the majority of whom report feeling some trepidation over them. Some countries have been exploring more privacy-friendly solutions that the public will accept. One of those is the use of dogs.