Innovation Saskatchewan plans to use robots to help reduce the amount of solid waste that is placed in landfills. The group unveiled its new technology at Innovation Place on the University of Regina campus on Tuesday from its two winners of the 2019 Innovation Saskatchewan challenge. Prairie Robotics used artificial intelligence and cameras to capture waste data in real time while researchers at the U of R created a system designed to handle Saskatchewan's extreme weather all while being able to weigh moving vehicles. The province expects the two solutions to be beneficial in help to reduce sold waste dumped into landfills by 30 per cent by 2030. "Our tech community has developed a tracking and reporting mechanism using artificial intelligence which can reduce the expense of landfill operations and lead to long-term environmental efficiencies," Innovation Minister Tina Beaudry-Mellor said.

How thredUP is Driving the Circular Fashion Movement with AI

Circular fashion is part of the circular economy, an economic system that at its core is embedded with an ideology of reuse, recycle and refurbish in order to eliminate waste, stop items from going into landfills, and extend the lifecycle of products by keeping them in use and in circulation. The fashion industry is notorious for its wasteful and environmentally damaging practices accounting for over 10% of global carbon emissions a percentage which is slated to increase to 24% of the global carbon budget by the year 2050 at current demand. Much of this is due to the synthetic fibers and fabrics primarily used in fast fashion, 70 million barrels of oil are used to produce polyester every year and wasteful practices exacerbate the impact, it turns out that the equivalent of one garbage truck of textiles is landfilled or incinerated every second! Fresh on the heels of a $175 million raise, thredUP is poised to capitalize on the growing $24 billion second-hand market through its use of artificial intelligence to bring efficiencies and scale to every area of its operations, while fueling the circular fashion trend among traditional retail brands with the launch of its "resale as a service" offering. The company's mission is to inspire a new generation of shoppers to think second hand first, keeping clothing out of landfills so that people can look great without being part of the problem.

Humans have been building machines to separate waste into different streams of different value requiring differing processes for decades. Until recently, we were mostly failing to do it well enough to be worth the investment. Instead, millions of people globally manually sort trash, sometimes with developed country workplace safety standards, sometimes living in developing country trash fields and scraping a living out of them. In London in the 1850s, when the population was roughly 3 million, a thousand rag and bone men plied their trade, greasy bags over their shoulders or slung on rough carts, picking through the detritus of the city to find enough items of value to allow them to pay for their lodging and food. In 1988, the World Bank estimated that 1-2% of the global population made most or all of its living picking through waste.

How can artificial intelligence help save the planet?

When I was a young boy, I was very ill. My immune system was not working as it should. I felt sick after meeting other children, so I had to live in isolation. I was coughing so severely that on a few occasions, I almost fainted. My loving parents tried everything to help me, consulted every health practitioner.

Not going anywhere: How to handle the world's growing trash problem 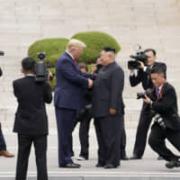 SINGAPORE/KUALA LUMPUR - The stench of curdled milk wafted from a shipping container of waste at Malaysia's Port Klang as Environment Minister Yeo Bee Yin told a group of journalists in May she would send the maggot-infested rubbish back where it came from. Yeo was voicing a concern that has spread across Southeast Asia, fueling a media storm over the dumping of rich countries' unwanted waste. About 5.8 million tons of trash was exported between January and November last year, led by shipments from the U.S., Japan and Germany, according to Greenpeace. Now governments across Asia are saying no to the imports, which for decades fed mills that recycled waste plastic. As more and more waste came, the importing countries faced a mounting problem of how to deal with tainted garbage that couldn't be easily recycled.

When the Dutch arrived in New York Harbor in 1609, Staten Island--or Staaten Eylandt, as they named it--was a wild wonderland, woodland in the middle and tidal salt marsh on the edges, populated by the local Lenape tribe, plus an embarrassment of natural riches: eels, bluefish, bitterns, herons, muskrats, ducks, clams, crabs, wild turkeys, porpoises, and more. Jutting midway into the island from the west coast, like a hook in the island's side, was the Fresh Kills estuary, a tidal wetland thriving with plants and critters, created by the retreat of the Wisconsin Ice Sheet some 17,000 years ago. After World War II, the bursting city of New York found itself with a trash problem. In 1948, the city started officially dumping its trash into the marshes and waters of Fresh Kills. What became America's first landfill was meant to be temporary, but it stuck. By 1955, it was the biggest landfill in the world--indeed, at 2,700 acres, it was the biggest human-made structure in the world. By 1991, the landfill contained 150 million tons of tightly packed garbage in more volume than could fill the Great Wall of China. Fresh Kills was wetland no more.

Plastic-plucking robots are the future of recycling

We are living in the Age of Plastic. In 2015, the world's industries created 448 million tons of it -- twice as much as it did in 1998. However, our recycling efforts have not matched pace. In fact, according to the EPA, barely 14 percent of plastic products are recycled globally. But a new generation of recycling technology is here to keep the world's plastics in circulation and out of our landfills.

To Recycle, or Not To Recycle? This Trash Robot Knows For Sure

If you're at all like me, you have paused over those lineups of different colored bins at an airport, empty coffee cup in hand, and wondered where to toss it. Or should the lid go in recycle and the paper in landfill? And then you look in the bins and realize that the contents are all mixed up at this point anyway so it really doesn't matter, it's all going to end up in trash, unfortunately. That is a problem startup Clean Robotics is trying to fix with its trash robot. The robotic system uses motion sensors to detect someone approaching and flip open a lid, load sensors to know when something is tossed into the bin, and metal detectors and a machine vision system that analyzes the objects to help determine whether they are recyclable or landfill.