Amazon's acquisition of iRobot could mean cheaper Roombas, but we have some concerns

From smart TVs to gaming platforms to that weird microwave phase, Amazon loves to make its own version of stuff that already exists. That's not the case with robot vacuums, apparently, because Amazon is acquiring iRobot. Amazon and Roomba under the same digital roof could impact consumers in a few ways, both good and bad. Here's what the merger could mean for you: Right now, Roombas aren't exactly considered a bang for your buck. Competitors like Roborock and Ecovacs offer features past vacuuming itself like mopping, LiDAR mapping, and automatic emptying at much lower price points than the closest iRobot counterparts.

SHOPPING: Products featured in this article are independently selected by our shopping writers. If you make a purchase using links on this page, MailOnline will earn an affiliate commission. If you like a bargain but missed out on Amazon Prime Day, then you're in luck, as right now, you can score the Echo Show 5 for only £39.99 - that's its lowest price ever. Amazon is giving tech lovers the opportunity to score the highly-rated smart display with Alexa for £35 off with the promo code SHOW5PROMO. Combining the smart voice control of Alexa with a 5.5-inch touch screen, the device lets you make video calls to friends and family, watch your favourite shows, listen to songs and control your smart home devices, as well as a long list of other features.

The best Amazon device bundle sales ahead of Prime Day It's no secret that Amazon devices are some of the best things to buy on Prime Day. Amazon usually discounts most of its gadgets to record-low prices for the two-day shopping event, but Prime members can take advantage of great sales now. In addition to bringing devices like the Echo Dot and the Fire TV Cube down to their best prices yet, early Prime Day deals have discounted a bunch of Amazon device bundles, too. Here are the best deals we found on bundled Amazon devices that you can get before Prime Day begins. Adding an Amazon smart plug to your purchase when you pick up an Echo Dot will only cost you $5 more, so you'll get both devices for a total of $25.

Amazon has pulled another solid deal out of its hat ahead of Prime Day. You'd essentially be getting the smart doorbell for free, as Echo Show 5 typically costs the same price. The Ring Doorbell normally costs $100 by itself. The standard price of the bundle is $150, which is already $35 less than the products cost separately. The current version of the Alexa-enabled Echo Show 5 arrived a year ago. We gave it a score of 85 in our review, finding the decent sound quality and bedside-table size to be plus points.

Smart homes on rise, will Artificial Intelligence take over next?

Smart home or automation technology that converts a home fully tech-driven with a remote program device has integrated home appliances with sensors and actuators via the internet. But the next phase of it is bound to be of Artificial Intelligence that is fast taking off in this segment. The technology available so far is able to control devices like light, fan, TV, climate, enjoyment systems, and appliances. Some common applications include lighting control, HVAC, outdoor lawn irrigation, kitchen appliances, and security systems are already part of our daily life. Read: Canada's defense scientists develop a model to enable trust in Artificial Intelligence and Autonomy (January 28, 2021) Voice control devices like Amazon Alexa or Google Home have accentuated the process to control almost every aspect of home through the Internet of Things (IoT) at a cost that ranges from $174 to $10,000, which has made repetitive daily routines easier and significantly cut down on energy costs too.

How safe is YOUR smart device? Popular gadgets including Amazon Echo and Google Nest can be HACKED

Smart home devices from companies such as Amazon and Google can be hacked and used to crash websites, steal data and snoop on users, an investigation reveals. Consumer group Which? has found poor security on eight smart devices, some of which are no longer supported with vital security updates due to their age. Examples include the first generation Amazon Echo smart speaker, released in 2014, and a Virgin Media internet router from 2017. All of the products had vulnerabilities that could leave users exposed to cybercriminals, Which? Domestic abuse survivors can also be tracked and controlled by ex-partners who exploit weak security on devices including Wi-Fi routers and security cameras. 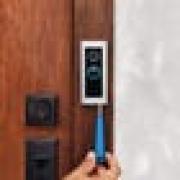 The home security industry has been revolutionized with new technology, ranging from smart home sensors to smart locks to security video cameras. But one of the most subtle and effective security measures you can add to your home is a video camera doorbell. These doorbells serve two purposes: they record footage of people who approach your front door, and they alert you with a pleasant chime or jingle when they're pressed -- just like a regular doorbell -- and have a video recording of everything just in case. Although these devices can be very useful and increase your home's security, it can be tough to determine which video doorbell you should pick. Luckily for you, we've put together a selection of the top video doorbells in 2022.

Protect your home with this Eufy video doorbell for $153

Looking to protect your home? Amazon is selling the Eufy Security 2K Video Doorbell for $153. In our review of the Eufy 2k Video Doorbell, we gave it four out of five stars. "The Eufy Security Wireless Video Doorbell delivers a great set of features, and its accompanying Homebase storage unit will eliminate the need for a cloud-storage subscription–at least for most people," we said. Unlike other video doorbells, Eufy doesn't require cloud storage to store all your videos.

Amazon's Ring cameras may be able to detect people by their smell, according to new patents the company submitted. Ring's internet-connected doorbells would also be able to scan neighbourhoods and identify "suspicious" people based on their skin texture, gait (walk) and voices. The cameras do not have facial recognition, but the company has 17 patents for features that use the technology. One patent, Insider reports, mentions a "Neighborhood Alert Mode" that would send an alert to other neighbours after a user share a picture or video of someone found suspicious that prompts other doorbells to start recording – even if the person does not come up to their doorbell. The biometric information mentioned includes palm, finger, retina, iris, skin texture, typing, gait, voice, and "odour recognition".

A Black Woman Invented Home Security. Why Did It Go So Wrong?

There's a well-known story among surveillance studies scholars and students of Black innovation: that of Marie Van Brittan Brown, a Black woman from Jamaica, Queens, New York who is now recognized as having invented the home security system in 1966. Brown worked long hours as a nurse and often came home late at night. Her husband also worked "irregular hours," and Brown worried about who might knock on her door if she were home alone at night. Similar versions of Brown's story can be found at the MIT Lemelson Center and all around the internet, including on Wikipedia, the African American history site Blackpast, and the history site Timeline. It's understandable that attention would be paid to Brown's pioneering work as a Black woman inventor whose contribution has rightly been cited in the development of subsequent home security systems and as the origin point for a massive industry.