Way beyond AlphaZero: Berkeley and Google work shows robotics may be the deepest machine learning of all 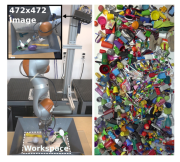 The seemingly simple task of grasping an object from a large cluster of different kinds of objects is "one of the most significant open problems in robotics," according to Sergey Levine and collaborators. Grasping is a good example of problems that bedevil real-world machine learning, including latency that throws off the expected order of events, and goals that may be difficult to specify. The vast majority of artificial intelligence has been developed in an idealized environment: a computer simulation that dodges the bumps of the real world. Be it DeepMind's AlphaMu program for Go and chess and Atari or OpenAI's GPT-3 for language generation, the most sophisticated deep learning programs have all benefitted from a pruned set of constraints by which software is improved. For that reason, the hardest and perhaps the most promising work of deep learning may lie in the realm of robotics, where the real world introduces constraints that cannot be fully anticipated.

Specifying reward functions for robots that operate in environments without a natural reward signal can be challenging, and incorrectly specified rewards can incentivise degenerate or dangerous behavior. A promising alternative to manually specifying reward functions is to enable robots to infer them from human feedback, like demonstrations or corrections. To interpret this feedback, robots treat as approximately optimal a choice the person makes from a choice set, like the set of possible trajectories they could have demonstrated or possible corrections they could have made. In this work, we introduce the idea that the choice set itself might be difficult to specify, and analyze choice set misspecification: what happens as the robot makes incorrect assumptions about the set of choices from which the human selects their feedback. We propose a classification of different kinds of choice set misspecification, and show that these different classes lead to meaningful differences in the inferred reward and resulting performance. While we would normally expect misspecification to hurt, we find that certain kinds of misspecification are neither helpful nor harmful (in expectation). However, in other situations, misspecification can be extremely harmful, leading the robot to believe the opposite of what it should believe. We hope our results will allow for better prediction and response to the effects of misspecification in real-world reward inference.

We train a single, goal-conditioned policy that can solve many robotic manipulation tasks, including tasks with previously unseen goals and objects. We rely on asymmetric self-play for goal discovery, where two agents, Alice and Bob, play a game. Alice is asked to propose challenging goals and Bob aims to solve them. We show that this method can discover highly diverse and complex goals without any human priors. Bob can be trained with only sparse rewards, because the interaction between Alice and Bob results in a natural curriculum and Bob can learn from Alice's trajectory when relabeled as a goal-conditioned demonstration. Finally, our method scales, resulting in a single policy that can generalize to many unseen tasks such as setting a table, stacking blocks, and solving simple puzzles. We are motivated to train a single goal-conditioned policy (Kaelbling, 1993) that can solve any robotic manipulation task that a human may request in a given environment. In this work, we make progress towards this goal by solving a robotic manipulation problem in a tabletop setting where the robot's task is to change the initial configuration of a variable number of objects on a table to match a given goal configuration. This problem is simple in its formulation but likely to challenge a wide variety of cognitive abilities of a robot as objects become diverse and goals become complex. Motivated by the recent success of deep reinforcement learning for robotics (Levine et al., 2016; Gu et al., 2017; Hwangbo et al., 2019; OpenAI et al., 2019a), we tackle this problem using deep reinforcement learning on a very large training distribution. An open question in this approach is how we can build a training distribution rich enough to achieve generalization to many unseen manipulation tasks. This involves defining both an environment's initial state distribution and a goal distribution.

Learning a robot motor skill from scratch is impractically slow; so much so that in practice, learning must be bootstrapped using a good skill policy obtained from human demonstration. However, relying on human demonstration necessarily degrades the autonomy of robots that must learn a wide variety of skills over their operational lifetimes. We propose using kinematic motion planning as a completely autonomous, sample efficient way to bootstrap motor skill learning for object manipulation. We demonstrate the use of motion planners to bootstrap motor skills in two complex object manipulation scenarios with different policy representations: opening a drawer with a dynamic movement primitive representation, and closing a microwave door with a deep neural network policy. We also show how our method can bootstrap a motor skill for the challenging dynamic task of learning to hit a ball off a tee, where a kinematic plan based on treating the scene as static is insufficient to solve the task, but sufficient to bootstrap a more dynamic policy. In all three cases, our method is competitive with human-demonstrated initialization, and significantly outperforms starting with a random policy. This approach enables robots to to efficiently and autonomously learn motor policies for dynamic tasks without human demonstration.

Offline reinforcement learning (RL), also known as batch RL, aims to optimize policy from a large pre-recorded dataset without interaction with the environment. This setting offers the promise of utilizing diverse, pre-collected datasets to obtain policies without costly, risky, active exploration. However, commonly used off-policy algorithms based on Q-learning or actor-critic perform poorly when learning from a static dataset. In this work, we study why off-policy RL methods fail to learn in offline setting from the value function view, and we propose a novel offline RL algorithm that we call Pessimistic Offline Policy Optimization (POPO), which learns a pessimistic value function to get a strong policy. We find that POPO performs surprisingly well and scales to tasks with high-dimensional state and action space, comparing or outperforming several state-of-the-art offline RL algorithms on benchmark tasks.

This work investigates the problem of multi-agents trajectory prediction. Prior approaches lack of capability of capturing fine-grained dependencies among coordinated agents. In this paper, we propose a spatial-temporal trajectory prediction approach that is able to learn the strategy of a team with multiple coordinated agents. In particular, we use graph-based attention model to learn the dependency of the agents. In addition, instead of utilizing the recurrent networks (e.g., VRNN, LSTM), our method uses a Temporal Convolutional Network (TCN) as the sequential model to support long effective history and provide important features such as parallelism and stable gradients. We demonstrate the validation and effectiveness of our approach on two different sports game datasets: basketball and soccer datasets. The result shows that compared to related approaches, our model that infers the dependency of players yields substantially improved performance. Code is available at https://github.com/iHeartGraph/predict

Humans can leverage hierarchical structures to split a task into sub-tasks and solve problems efficiently. Both imitation and reinforcement learning or a combination of them with hierarchical structures have been proven to be an efficient way for robots to learn complex tasks with sparse rewards. However, in the previous work of hierarchical imitation and reinforcement learning, the tested environments are in relatively simple 2D games, and the action spaces are discrete. Furthermore, many imitation learning works focusing on improving the policies learned from the expert polices that are hard-coded or trained by reinforcement learning algorithms, rather than human experts. In the scenarios of human-robot interaction, humans can be required to provide demonstrations to teach the robot, so it is crucial to improve the learning efficiency to reduce expert efforts, and know human's perception about the learning/training process. In this project, we explored different imitation learning algorithms and designed active learning algorithms upon the hierarchical imitation and reinforcement learning framework we have developed. We performed an experiment where five participants were asked to guide a randomly initialized agent to a random goal in a maze. Our experimental results showed that using DAgger and reward-based active learning method can achieve better performance while saving more human efforts physically and mentally during the training process.

A Framework for Efficient Robotic Manipulation

Data-efficient learning of manipulation policies from visual observations is an outstanding challenge for real-robot learning. While deep reinforcement learning (RL) algorithms have shown success learning policies from visual observations, they still require an impractical number of real-world data samples to learn effective policies. However, recent advances in unsupervised representation learning and data augmentation significantly improved the sample efficiency of training RL policies on common simulated benchmarks. Building on these advances, we present a Framework for Efficient Robotic Manipulation (FERM) that utilizes data augmentation and unsupervised learning to achieve extremely sample-efficient training of robotic manipulation policies with sparse rewards. We show that, given only 10 demonstrations, a single robotic arm can learn sparse-reward manipulation policies from pixels, such as reaching, picking, moving, pulling a large object, flipping a switch, and opening a drawer in just 15-50 minutes of real-world training time. We include videos, code, and additional information on the project website -- https://sites.google.com/view/efficient-robotic-manipulation.

Imitation Learning is a promising paradigm for learning complex robot manipulation skills by reproducing behavior from human demonstrations. However, manipulation tasks often contain bottleneck regions that require a sequence of precise actions to make meaningful progress, such as a robot inserting a pod into a coffee machine to make coffee. Trained policies can fail in these regions because small deviations in actions can lead the policy into states not covered by the demonstrations. Intervention-based policy learning is an alternative that can address this issue -- it allows human operators to monitor trained policies and take over control when they encounter failures. In this paper, we build a data collection system tailored to 6-DoF manipulation settings, that enables remote human operators to monitor and intervene on trained policies. We develop a simple and effective algorithm to train the policy iteratively on new data collected by the system that encourages the policy to learn how to traverse bottlenecks through the interventions. We demonstrate that agents trained on data collected by our intervention-based system and algorithm outperform agents trained on an equivalent number of samples collected by non-interventional demonstrators, and further show that our method outperforms multiple state-of-the-art baselines for learning from the human interventions on a challenging robot threading task and a coffee making task. Additional results and videos at https://sites.google.com/stanford.edu/iwr .