Ahead of the 2021-22 Budget being handed down on Tuesday, the federal government has announced a new digital economy strategy, which it described as an investment into the settings, infrastructure, and incentives to grow Australia's digital economy. The strategy, costing just shy of AU$1 billion, is set to include work on "emerging aviation technologies". The government will be making a two-year, AU$32.6 million investment in an Emerging Aviation Technology Partnerships program to "support the use of emerging aviation technologies to address priority community, mobility, and cargo needs in regional Australia". The program will see the government partner with industry to look into tech such as electric engines, drones, and electric vertical take-off and landing aircraft. "This program will support the digital transformation of Australian businesses, increase business efficiency, and reduce carbon emissions through new technology," the government said.

NASA's Perseverance Mars rover has achieved yet another first after capturing the sounds of another spacecraft hovering on the red planet. Using the microphone on its rock-zapping SuperCam instrument, the six-wheeled robot listened to the sounds of the Ingenuity helicopter on April 30 and recorded the whirring of its fast-spinning rotors. This marked the first time a spacecraft has recorded audio of another probe on a world beyond Earth. This was the chopper's fourth flight since Perseverance and Ingenuity landed together on Feb. 18 on the floor of Mars' Jezero Crater, NASA said in a statement. A video recently released by NASA combined the footage from Perseverance's Mastcam-Z imager of the solar-powered helicopter with the recorded audio, allowing scientists to know how the robot is performing just by tuning in to the sound it makes.

Jose Hernandez joins'Fox News Live' to discuss NASA's historic feat and Blue Origin's latest successful launch, return. NASA's Mars Ingenuity helicopter took off on its fifth test flight Friday, but it won't be returning to the Perseverance rover this time. The helicopter took flight around 3:30 p.m. ET from Wright Brothers Field, where it has performed its previous test flights, with the plan this time to head south 423 feet and land in a new area for the first time. Data from the light will transmit back to NASA's Jet Propulsion Laboratory around 7:30 p.m. on Friday. NASA's Ingenuity Mars Helicopter can be seen hovering over Jezero Crater.

Your Call May Be Recorded (and Analyzed by a Bot)

"We can now access customer data that's been previously kind of locked away in call recordings," said Ian Jacobs, vice president research director at Forrester Research Inc., which predicts U.S. businesses will spend roughly $7 billion on contact center systems in 2021. "That means we're going to see a flood of new use cases for that data." Companies don't believe they can ignore the call-center experience they provide, despite millennials' so-called phone phobia and the proliferation of chatbots. Some 89% of companies expect phone communication to continue playing a role in customer care, according to industry publication Customer Contact Week. Verizon Communications Inc. is using technology from Afiniti Ltd. that uses artificial intelligence to connect callers with the agents who are calculated to have the best chance of keeping them loyal.

Can AI be made trustworthy?

As artificial systems (AI) get increasingly complex, they are being used to make forecasts – or rather generate predictive model results – in more and more areas of our lives. At the same time, concerns are on the rise about reliability, amid widening margins of error in elaborate AI predictions. Management science offers a set of tools that can make AI systems more trustworthy. The discipline that brings human decision-makers to the top of their game can also be applied to machines, according to Thomas G Dietterich, Professor Emeritus and Director of Intelligent Systems Research at Oregon State University. Human intuition still beats AI hands down in making judgment calls in a crisis. People – and especially those working in their areas of experience and expertise – are simply more trustworthy.

Since October 2019, Alphabet's Wing has operated a drone delivery service five days per week in the tiny hamlet of Christiansburg, Virginia; a community of just over 20,000. The early testbed has been one to watch for a delivery drone sector that's just emerging from in a slowly evolving regulatory regime. Key to the future of drone delivery is positive consumer sentiment. So how do the people of Christiansburg feel about the delivery drone service that's made their community one of a small number of canaries in the coal mine for the consumer drone sector? In short, they love it.

The Morning After: NASA makes more flight plans for the Mars copter

While there are many free-to-play titles these days, it seems like most high-profile games don't give players a way to try them out without paying the full price up front. That's not the case for Resident Evil Village, although an odd time-locked system has made it frustrating for fans to dive into the game before it's released next week. The good news is that Capcom has relaxed its policy a bit. The final demo will unlock tonight on PlayStation, Xbox, Steam and Stadia, and players can get a 60 minute taste of the game -- complete with towering vampire ladies -- at any point over the next eight days. On Friday, NASA announced it plans to transition the rotorcraft to an operational role once it completes its remaining test flights.

Jose Hernandez joins'Fox News Live' to discuss NASA's historic feat and Blue Origin's latest successful launch, return. NASA's helicopter on Mars, the four-pound "Ingenuity," failed to get off the ground for its fourth flight Thursday, but NASA said it is safe and will try again Friday. Previous test flights for the helicopter went well, with Ingenuity rising up 16 feet in the air during the third flight last Sunday then flashing downrange about 50 yards at a speed of 6.6 feet per second. The second test flight on April 22 and the first flight on April 19 also went as planned. The cause of Thursday's hiccup was a "watchdog" timer issue that prevented Ingenuity from transitioning to "flight mode." Although Wingcopter hasn't received clearance from the Federal Aviation Administration, the company moved a step closer to achieving that goal last year when it was named one of 10 companies in the United States to meet the FAA's "airworthiness" criteria for drones more complex than the consumer versions available online. The drone software company Flirtey and the delivery firm Zipline also were among the companies edging toward sending delivery aircraft weighing under 89 pounds into the skies. 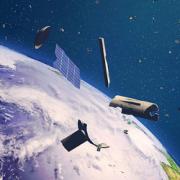 On Earth, avoiding collisions is a key priority for traffic cops, air traffic controllers, and the parents of toddlers. It is no different in space--and perhaps even more critical--given that objects orbiting the Earth are moving at more than 17,000 m.p.h., which means that even very small objects less than a centimeter in diameter have caused damage to the International Space Station, the Space Shuttle, and satellites. In fact, the U.S. National Aeronautics and Space Administration (NASA) estimates there are more than 500,000 such objects orbiting the Earth that are larger than a marble, and at least a million smaller pieces of debris that cannot be tracked. Based on the growing number of commercial and government launches of spacecraft, satellites, and even space stations, the number of objects that will need to be catalogued, tracked, and managed is expected to grow significantly in the coming years. And the solutions to this issue are fraught with both technical and political challenges.