Dr. Benji Maruyama is the Air Force Research Laboratory team lead for Autonomous Materials and the ... [ ] Autonomous Research System also known as ARES. ARES OS, an open-source software program, is now available online as a free download. In the fight to prevail over America's adversaries by out-innovating them - a fight which has all the hallmarks of a Cold War despite President Biden's assertions to the contrary - increasing the speed at which physical lab experiments can be done and iterated is vital. Air Force Research Laboratory (AFRL) scientist, Dr. Benji Maruyama, is reminding his peers and the public that, "Research is a painfully slow process. Being in a lab and doing experiments takes lots of time."

A soldier wears virtual reality glasses. Illustration created by NIWC Pacific. AFA: Beyond throwing around "artificial intelligence" as a buzzword during briefings, the Air Force needs to communicate more clearly within own its ranks and to industry about what it wants in AI capabilities, a top Air Force intelligence officer said. "I'm in the Pentagon, so I see a lot of PowerPoint presentations, and I see a lot of slides saying'we're going to use some AI'" to solve a problem, Lt. Gen. Mary O'Brien said. "But we need to be more precise. Sometimes we say we want AI, but what we describe to industry is an automation tool, or a visualization tool, or [some technology] without training data." 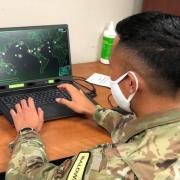 As researchers and engineers race to develop new artificial intelligence systems for the U.S. military, they must consider how the technology could lead to accidents with catastrophic consequences. In a startling, but fictitious, scenario, analysts at the Center for Security and Emerging Technology -- which is part of Georgetown University's Walsh School of Foreign Service -- lay out a potential doomsday storyline with phantom missile launches. In the scenario, U.S. Strategic Command relies on a new missile defense system's algorithms to detect attacks from adversaries. The system can quickly and autonomously trigger an interceptor to shoot down enemy missiles which might be armed with nuclear warheads. "One day, unusual atmospheric conditions over the Bering Strait create an unusual glare on the horizon," the report imagined.

The U.S. Army Research Lab made breakthroughs this summer on two neural networks projects that could assist commanders' decision-making on the battlefield and provide soldiers' health information through fibers in their uniform. The advancements come as the U.S. military is preparing for data-driven battle, in which gobs of data are transmitted across the battlespace, processed and used in a commander's decision-making. Neural networks are a combination of algorithms that work together to recognize patterns in data through a process similar to that of the human brain. The first project is working to provide a tool to battle commanders that quantifies uncertainty in data analysis using neural networks. Researchers associated with the Army Research Lab created a new framework for neural network processing that would use artificial intelligence to provide confidence ratings.

Vertical federated learning (VFL) leverages various privacy-preserving algorithms, e.g., homomorphic encryption or secret sharing based SecureBoost, to ensure data privacy. However, these algorithms all require a semi-honest secure definition, which raises concerns in real-world applications. In this paper, we present Aegis, a trusted, automatic, and accurate verification framework to verify the security of VFL jobs. Aegis is separated from local parties to ensure the security of the framework. Furthermore, it automatically adapts to evolving VFL algorithms by defining the VFL job as a finite state machine to uniformly verify different algorithms and reproduce the entire job to provide more accurate verification. We implement and evaluate Aegis with different threat models on financial and medical datasets. Evaluation results show that: 1) Aegis can detect 95% threat models, and 2) it provides fine-grained verification results within 84% of the total VFL job time.

Hypothesis Selection is a fundamental distribution learning problem where given a comparator-class $Q=\{q_1,\ldots, q_n\}$ of distributions, and a sampling access to an unknown target distribution $p$, the goal is to output a distribution $q$ such that $\mathsf{TV}(p,q)$ is close to $opt$, where $opt = \min_i\{\mathsf{TV}(p,q_i)\}$ and $\mathsf{TV}(\cdot, \cdot)$ denotes the total-variation distance. Despite the fact that this problem has been studied since the 19th century, its complexity in terms of basic resources, such as number of samples and approximation guarantees, remains unsettled (this is discussed, e.g., in the charming book by Devroye and Lugosi `00). This is in stark contrast with other (younger) learning settings, such as PAC learning, for which these complexities are well understood. We derive an optimal $2$-approximation learning strategy for the Hypothesis Selection problem, outputting $q$ such that $\mathsf{TV}(p,q) \leq2 \cdot opt + \eps$, with a (nearly) optimal sample complexity of~$\tilde O(\log n/\epsilon^2)$. This is the first algorithm that simultaneously achieves the best approximation factor and sample complexity: previously, Bousquet, Kane, and Moran (COLT `19) gave a learner achieving the optimal $2$-approximation, but with an exponentially worse sample complexity of $\tilde O(\sqrt{n}/\epsilon^{2.5})$, and Yatracos~(Annals of Statistics `85) gave a learner with optimal sample complexity of $O(\log n /\epsilon^2)$ but with a sub-optimal approximation factor of $3$.

Integrating Planning, Execution and Monitoring in the presence of Open World Novelties: Case Study of an Open World Monopoly Solver

The game of monopoly is an adversarial multi-agent domain where there is no fixed goal other than to be the last player solvent, There are useful subgoals like monopolizing sets of properties, and developing them. There is also a lot of randomness from dice rolls, card-draws, and adversaries' strategies. This unpredictability is made worse when unknown novelties are added during gameplay. Given these challenges, Monopoly was one of the test beds chosen for the DARPA-SAILON program which aims to create agents that can detect and accommodate novelties. To handle the game complexities, we developed an agent that eschews complete plans, and adapts it's policy online as the game evolves. In the most recent independent evaluation in the SAILON program, our agent was the best performing agent on most measures. We herein present our approach and results.