One, two, tree: how AI helped find millions of trees in the Sahara 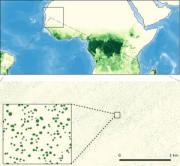 When a team of international scientists set out to count every tree in a large swathe of west Africa using AI, satellite images and one of the world's most powerful supercomputers, their expectations were modest. Previously, the area had registered as having little or no tree cover. The biggest surprise, says Martin Brandt, assistant professor of geography at the University of Copenhagen, is that the part of the Sahara that the study covered, roughly 10%, "where no one would expect to find many trees", actually had "quite a few hundred million". Trees are crucial to our long-term survival, as they absorb and store the carbon dioxide emissions that cause global heating. But we still do not know how many there are.

Archive review – anyone for a posthuman wife? She comes with an off switch

British illustrator and visual-effects director Gavin Rothery makes his feature debut with this artificial intelligence thriller: a tale of love, death and robotics that has some nicely creepy moments. Set in 2038, it centres on lonely computer scientist George Almore (Divergent's Theo James), who is holed up in a remote research facility in Japan secretly working on an android version of his wife Jules (Stacy Martin); she has died in a car crash. His prototype, J3 (also played by Martin), is his closest yet to the real thing: a highly advanced humanoid with spookily pale skin who looks like she might be the ghost of his dead wife. Poor old J1 and J2, his earlier, clunkier prototypes: they look on bitterly as the newer, sleeker model gets all George's attention. The movie opens with sweeping helicopter shots over a snowy forest.

Here is a throwaway space spoof, an affectionate send-up of the naffness of early 90s video games, that lovingly recreates the vintage details with its production design and fight choreography, but is troublingly low on scripted gags. It plays out in two dimensions: virtual and real life. Inside a computer game, explorer Max Cloud is an intergalactic hero, a preposterous macho knucklehead in latex, sturdily performed by actor and martial arts expert Scott Adkins, who has appeared in a few of the Marvels. I did wonder if an actor with the comic chops for some megaton silliness might have done some heavier lifting here. Meanwhile, in actual Brooklyn, teenage gamer Sarah (Isabelle Allen) is hooked on the Max Cloud video game.

Art meets tech to mark first 100 years of the robot 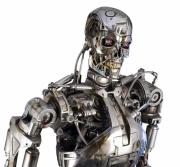 "Listen Josef," said the Czech playwright Karel Čapek to his brother. "I have an idea for a play." Josef, an artist of some renown, was painting furiously and unimpressed by his brother's intrusion. "What kind of play?" he asked, sharply. Karel set out the plot.

Not many plays introduce a new word to the language. One that did was Karel Čapek's RUR: Rossum's Universal Robots that had its premiere in Prague 100 years ago this month. Every time we use the word "robot" to denote a humanoid machine, it derives from Čapek's play, which coined the term from the Czech "robota" meaning forced labour. But a play that was hugely popular in its time – its Broadway premiere in 1922 had a cast that included Spencer Tracy and Pat O'Brien as robots – has now fallen into neglect. Given our fascination with artificial intelligence, it's high time we gave it another look.

Refreshingly modern dinosaurs and a cyberpunk cat: our games picks for 2021

Last year's ensemble Avengers game was a bit of a disappointment, so DC fans will be hoping for better from this action game set in the Batman universe. As Nightwing, Batgirl, Robin and Red Hood, you push back against the ever-encroaching criminal forces of Gotham. It looks moody and ultra-stylish. A stylish art-deco shooter about a time-travelling assassin caught in a time loop. Stuck in an endlessly repeating island party, he must take out eight of its guests – but the really interesting part is that another assassin, controlled by another player, is trying to stop him doing exactly that.

'Peak hype': why the driverless car revolution has stalled

By 2021, according to various Silicon Valley luminaries, bandwagoning politicians and leading cab firms in recent years, self-driving cars would have long been crossing the US, started filing along Britain's motorways and be all set to provide robotaxis in London. Indeed in the last weeks of 2020 Uber, one of the biggest players and supposed beneficiaries, decided to park its plans for self-driving taxis, selling off its autonomous division to Aurora in a deal worth about $4bn (£3bn) – roughly half what it was valued at in 2019. The decision did not, Uber's chief executive protested, mean the company no longer believed in self-driving vehicles. "Few technologies hold as much promise to improve people's lives with safe, accessible, and environmentally friendly transportation," Dara Khosrowshahi said. But more people might now take that promise with a pinch of salt.

The video games you may have missed in 2020

PS4; Vanillaware/Atlus You'd think a game with 13 protagonists would be a bloated mess, but this is anything but. With a complex, superbly rewarding storyline to piece together and mind-blowing, time-bending revelations around every corner, this mix of visual novel and tower-defence game is a must-play. PC; Colestia Forget Call of Duty: Black Ops – this is the CIA conspiracy thriller you're looking for. The twist is that this isn't just a detective puzzler – the more you unearth, the scarier your surroundings become. PC, Mac, Nintendo Switch; Adamgryu This wonderful little Zelda-inspired hiking adventure came out on PC last year, but you might have missed it on Switch this year. It leads to such an evocative few hours, with gorgeous natural colours filtered through its retro art style.

This Christmas has been the biggest ever for the video games industry, as lockdown, technological leaps and new consoles combine to bring more interest than ever to the sector. Steam, the PC gaming platform, recorded its largest ever Christmas Day, according to public stats, with almost 25 million people logged on to the service at 3.10pm UK time, more than 6 million of whom were actively playing a game concurrently. That was up from the 15 million who logged on to the service at once on Christmas Day 2019. By contrast, Sony and Microsoft are notoriously tight-lipped about player counts for PlayStation and Xbox, but both entered the festive season with much to celebrate. The two companies continue to sell their new consoles, the PlayStation 5 and Xbox Series X & S, as fast as they can make them, a fact that has caused no small amount of stress for households trying to secure one of the coveted machines to leave under the tree.

Google told scientists to use 'a positive tone' in AI research, documents show

Google this year moved to tighten control over its scientists' papers by launching a "sensitive topics" review, and in at least three cases requested authors refrain from casting its technology in a negative light, according to internal communications and interviews with researchers involved in the work. Google's new review procedure asks that researchers consult legal, policy and public relations teams before pursuing topics such as face and sentiment analysis and categorizations of race, gender or political affiliation, according to internal webpages explaining the policy. "Advances in technology and the growing complexity of our external environment are increasingly leading to situations where seemingly inoffensive projects raise ethical, reputational, regulatory or legal issues," one of the pages for research staff stated. Reuters could not determine the date of the post, though three current employees said the policy began in June. Google declined to comment for this story.