In Go, no successful evaluation function for non-terminal positions has ever been found. Therefore, it is not a problem that will be solved with faster search. It pushes the boundaries of what is possible with new algorithms such as Monte Carlo methods. Work on computer Go started in the 1960's, but it was not until 2016 that the AlphaGo program was able to best the second-highest ranking professional Go player.

When it comes to imitating human emotion, robots have a long way to go, but researchers at Columbia Engineering's Creative Machines Lab have taken an initial step toward this goal. They designed a robot capable of predicting another robot's intent, essentially placing itself in the shoes (or the little plastic wheels) of the second machine. Here's how engineers designed the experiment: They placed one robot in a 3-foot by 2-foot playpen and programmed it to travel toward any green circle it could see projected on the floor. A large red box obscured the robot's view of some circles, meaning it didn't travel to these spots, even if they were physically closer than others. From above, the observer robot watched its buddy navigate the space for two hours and then began predicting its path.

What AlphaGo Can Teach Us About How People Learn

David Silver is responsible for several eye-catching demonstrations of artificial intelligence in recent years, working on advances that helped revive interest in the field after the last great AI Winter. At DeepMind, a subsidiary of Alphabet, Silver has led the development of techniques that let computers learn for themselves how to solve problems that once seemed intractable. Most famously, this includes AlphaGo, a program revealed in 2017 that taught itself to play the ancient board game Go to a grandmaster level. Go is too subtle and instinctive to be tamed using conventional programming, but AlphaGo learned to play through practice and positive reward--an AI technique known as "reinforcement learning." In 2018, Silver and colleagues developed a more general version of the program, called AlphaZero, capable of learning to play expert chess and shogi as well as Go.

Is Britain still an AI leader?

The UK has been at the cutting edge of artificial intelligence (AI) innovation, from Alan Turing, the pioneering mathematician and computer visionary, who launched the field, to DeepMind's AlphaGo, the first computer program to defeat a professional Go player in 2015. Several pioneering AI companies were founded in the UK, including DeepMind, SwiftKey and Magic Pony, all of which were acquired by US companies – Google, Microsoft and Twitter – for $500 million, $250 million and $150 million, respectively. Over the last few years, the UK government has launched its Office for AI and Centre for Data Ethics and Innovation. But is the UK still an AI leader? In 2019, McKinsey Global Institute placed the UK in the top quartile for "AI readiness". 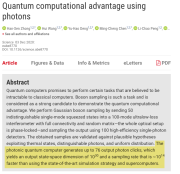 Purchases you make through our links may earn us a commission. If you don't own a robot vacuum by now, chances are, it's an item that's pretty high up there on your Christmas wish list. But spending hundreds of dollars on a quality model may not be something that's in everyone's holiday budget. If you still long for the convenience and ease of an automated vac, we've got the best news for you: The eufy 11S slim robot vacuum--our best-value pick for robot vacuums in 2020--is currently on sale for Get expert shopping advice delivered to your phone. Sign up for text message alerts from the deal-hunting nerds at Reviewed.

A Boston Dynamics robot dog is going to Chernobyl

The four-legged robot'Spot' is being pegged as a replacement for humans, who carry out routine, yet risky, measurements around the contaminated Chernobyl site. The long-term goal is to have the robots help take Chernobyl apart and have it safely decommissioned.

On limitations of learning algorithms in competitive environments

Playing human games such as chess and Go has long been considered to be a major benchmark of human capabilities. Computer programs have become robust chess players and, since the late 1990s, have been able to beat even the best human chess champions; though, for a long time, computers were unable to beat expert Go players -- the game of Go has proven to be especially difficult for computers. However, in 2016, a new program called AlphaGo finally won a victory over a human Go champion, only to be beaten by its subsequent versions (AlphaGo Zero and AlphaZero). AlphaZero proceeded to beat the best computers and humans in chess, shogi and Go, including all its predecessors from the Alpha family [1]. Core to AlphaZero's success is its use of a deep neural network, trained through reinforcement learning, as a powerful heuristic to guide a tree search algorithm (specifically Monte Carlo Tree Search). The recent successes of machine learning are good reason to consider the limitations of learning algorithms and, in a broader sense, the limitations of AI. In the context of a particular competition (or'game'), a natural question to ask is whether an absolute winner AI might exist -- one that, given sufficient resources, will always achieve the best possible outcome.

AI has become an asset for organizations to better understand their business position, and its capabilities have improved dramatically over the past decade. Artificial intelligence, first named in 1955 by computer scientist John McCarthy, has gone through a tremendous shift in the past decade. From the development of the first generative adversarial networks to Waymo reaching 10 million self-driven miles, AI has come a long way. Though many notable technologies seem ageless, most of them have come into fruition within the last 10 years -- Siri, Watson, Alexa and AlphaGo, to name a few. Beyond the development of digital assistants, there's been a paradigm shift in approaches to AI and enterprise application.

I missed this back in March (I think there was a lot going on back then?) but the feature-length documentary AlphaGo is now available to stream for free on YouTube. The movie documents the development by DeepMind/Google of the AlphaGo computer program designed to play Go and the competition between AlphaGo and Lee Sedol, a Go master. With more board configurations than there are atoms in the universe, the ancient Chinese game of Go has long been considered a grand challenge for artificial intelligence. On March 9, 2016, the worlds of Go and artificial intelligence collided in South Korea for an extraordinary best-of-five-game competition, coined The DeepMind Challenge Match. Hundreds of millions of people around the world watched as a legendary Go master took on an unproven AI challenger for the first time in history.

Council Post: Where Is Artificial Intelligence Now, And Where Should Your Company Be?

We are near the end of the hype cycle for artificial intelligence (AI). The human champion of the game of Go decided to retire, saying AI cannot be beaten after AlphaGo defeated him. Domain-specific chatbots are engaging with customers and providing them with the answers they need. AI is about to revolutionize our broken health-care system. Is your company ready for AI? Anyone with deep data claims to be using AI.