Alpha-beta pruning can be explained simply as a technique for not exploring those branches of a search tree that analysis indicates not to be of further interest either to the player making the analysis (this is obvious) or to his opponent (and this is frequently overlooked).
– Arthur L. Samuel, from Some Studies in Machine Learning Using the Game of Checkers. —Recent Progress. IBM Journal, November 1967, pp. 601-617. 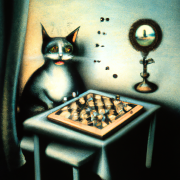 This work was created with DALL-E 2. The prompt used for the character creation is thoughtfully constructed. This gives uniqueness and unrepeatability to the work. Once came out from the algorithm, the image resolution is pretty small so is enhanced, then is painted in Adobe Photoshop using an oil brush. The resulted image has a very good print quality.

The term itself originated in the 1950s. Arthur Samuel from IBM coined the term based on his research on computer checkers. In a game between a computer and a Connecticut checkers master, the computer won. This outcome opened up a world of possibilities. Today, machine learning has expanded far beyond simple games of checkers.

One of the pioneers of artificial intelligence, economist Herbert Simon, said in the 50s of the last century that "in the visible future, the range of problems that machines can handle will match that of the human mind." At that time, it didn't seem like such a naive forecast: it had already been possible to make a computer play checkers and learn from its own mistakes. But Simon died in 2001 without having witnessed that technology that had seemed so close. Although we might think that if AI has already been able to overcome in very complex fields (such as playing Go) or show skills that we have never had (such as detecting the sex of a person through a photo of the interior from your eye), it should be easy to copy our most ordinary skills, the small day-to-day actions we usually carry out unconsciously. However, these skills (tying a shoe tie, moving with agility on two legs, being able not to collide while moving on the street and thinking about anything else, etc.) are not simple because they are an intrinsic part of who we are: as any physiotherapist could remind us, the ability to walk is not easy to teach even humans.

On Fox Nation's "Maria Bartiromo's Insiders", White House trade adviser Peter Navarro pointed the finger at the Federal Reserve amid concerns of a potential U.S. economic recession. "The problem here, the thing that worries me is that we've got a Federal Reserve playing checkers in a chess world," said Navarro. Despite signs of slowing U.S. job growth and global economic uncertainty, Navarro insists that the U.S. economy is "solid", and he blamed the U.S. central bank for failing to properly react to financial moves made by global actors. "In the world of central banking, the Federal Reserve has to pay very close attention to what the European Central Bank is doing and other central banks. If they lower, we have to lower otherwise we lose exports and we slow our growth," said Navarro, adding that the high cost of borrowing is damaging to the U.S. economy.

Not long ago, Hadoop's technology was supposed to solve all the world's complex data problems. "From the time it went open source in 2007, Hadoop and its related technologies have been profound drivers of the growth of data science." While Hadoop continues to solve some thorny data problems, pundits are now asking "Is Hadoop dead?" It's a sad state of affairs when most organizations have yet to fully understand and take advantage of Hadoop but it is already seen as obsolete – things are moving awfully fast! In my eighteen years as a data professional, I've experienced many data transformations and technological advances.

"The program can achieve at least a draw against any opponent, playing either the black or white pieces," the researchers say in this week's online edition of the journal Science. "Clearly ... the world is not going to be revolutionized" by this, said Jonathan Schaeffer, chairman of the department of computing science at the University of Alberta. The important thing is the approach, he said. In the past, game-playing programs have used rules of thumb -- which are right most of the time, he said -- to make decisions. "What we've done is show that you can take non-trivial problems, very large problems, and you can do the same kind of reasoning with perfection.

And now, after putting dozens of computers to work night and day for 18 years--jump, jump, jump--he says he has solved the game--king me!. "The starting position, assuming no side makes a mistake, is a draw," he says. Schaeffer's proof, described today in Science (and freely available here for others to verify), would make checkers the most complex game yet solved by machines, beating out the checker-stacking game Connect Four in difficulty by a factor of a million. "It's a milestone," says Murray Campbell, a computer scientist at IBM's T. J. Watson Research Center in Hawthorne, N.Y., and co-inventor of the chess program Deep Blue. "He's stretched the state of the art." Although technological limits prohibit analyzing each of the 500 billion billion possible arrangements that may appear on an eight-by-eight checkerboard, Schaeffer and his team identified moves that guaranteed the game would end in a draw no matter how tough the competition.

The new edition of this extraordinary book depicts the creation of the world champion checkers computer program, Chinook. In only two years, Chinook had become a worthy opponent to the world champion, and within four years had defeated all the world's top human players. Jonathan Schaeffer, the originator and leader of the Chinook team, details the mistakes and technical problems made and the lessons learned in the continuous effort to improve Chinook's performance, revealing the human factor behind the program's design. The development of Chinook begins in 1988 as an innocent question asked over lunch and is followed to the final match against then world champion, Marion Tinsley, and ultimately to its recent triumph, solving checkers. Schaeffer's unwaveringly honest narrative features new anecdotes, updated material and technology descriptions, and additional photos and figures, providing an engrossing account of an obsessive quest to achieve perfection in computer checkers.