The three of us were in a 1957 de Havilland Beaver, floating in the middle of a crater lake in the southwest quadrant of Alaska. The pilot was recounting the toll that the Vietnam War had taken on him, while, over in the right seat, my boyfriend, Karl, listened. Thanks to proximity, I was listening as well, though chances are they'd forgotten I was there. Outside, water sloshed against the pontoons, rocking the plane gently from side to side. No one had asked this man to tell his story in a long time, but Karl had asked, and so the pilot put the plane down on the lake, turned off the ignition, and began.

Is GitHub Copilot worth the cockpit?

One month ago, GitHub announced its latest, shiny product: an artificial intelligence tool developed by GitHub and OpenAI to assist users of Visual Studio Code by autocompleting code, but on the next level. It's a machine learning-powered software that can write code by itself, generating quite impressive programming functions. Here is the catch, there are a lot of dislikes going on for this cute little fellow. And I don't get why so much hate for this, how can you not like something like this in the market, and that too for free. Let's address them one by one So many articles are flooding to criticize, just for the sake of writing something.

Is Artificial Intelligence The New Logistics Technology For Organ Transportation?

Commercial Aviation has great importance in the ... [ ] transport of organs for transplants in receiving patients. Studies show that commercial air carriers carry more than 9,000 organs a year on board airplanes with passengers. In the United States, an estimated 114,000 people were waiting for organ transplants, and only 30% of those got their organs on time in 2019. According to Kaiser Health News and Reveal from the Center of Investigative Reporting, nearly 170 organs could not be transplanted. Almost 370 endured near misses with delays of two hours or more because of transportation problems.

Zala Aero, a Russian UAV manufacturer, presented its state-of-the-art vertical takeoff and landing drone – the ZALA VTOL – at the MAKS 2021 International Aviation and Space Salon, the company told reporters during the air show. "The ZALA VTOL combines the properties of an airplane type drone and a tilt-rotor aircraft. The flight configuration changes depending on the assigned mission. The electric propulsion system enables the aircraft to be in the air for up to 4 hours, providing a range of up to 200 km in aircraft configuration," the company said. The built-in on-board computer ZX1 based on artificial intelligence makes it possible to process Full HD format data and transmit HD videos and photos over encrypted communication links to a ground control station.

To be useful, drones need to be quick. Because of their limited battery life they must complete whatever task they have – searching for survivors on a disaster site, inspecting a building, delivering cargo – in the shortest possible time. And they may have to do it by going through a series of waypoints like windows, rooms, or specific locations to inspect, adopting the best trajectory and the right acceleration or deceleration at each segment. The best human drone pilots are very good at doing this and have so far always outperformed autonomous systems in drone racing. Now, a research group at the University of Zurich (UZH) has created an algorithm that can find the quickest trajectory to guide a quadrotor – a drone with four propellers – through a series of waypoints on a circuit.

To be useful, drones need to be quick. Because of their limited battery life, they must complete whatever task they have--searching for survivors on a disaster site, inspecting a building, delivering cargo--in the shortest possible time. And they may have to do it by going through a series of waypoints like windows, rooms, or specific locations to inspect, adopting the best trajectory and the right acceleration or deceleration at each segment. The best human drone pilots are very good at doing this and have so far always outperformed autonomous systems in drone racing. Now, a research group at the University of Zurich (UZH) has created an algorithm that can find the quickest trajectory to guide a quadrotor--a drone with four propellers--through a series of waypoints on a circuit.

Or in developed nations that are less wealthy than their closest neighbors, like my native Portugal. Because of the country's modest economic size, compared to most of Western Europe, many online companies have limited (or no) presence in Portuguese. British Airways, for instance, only offers customer service in Portuguese on weekdays during business hours--and they're a global airline with enormous operations in Europe. What's more, there are almost 230 million native speakers of Portuguese worldwide, the vast majority of them in Brazil (where, yes, British Airways also offers flights). It's the sixth most spoken language in the world.

Narita and Haneda airports start wider use of facial recognition 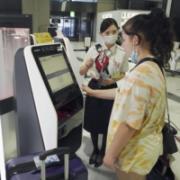 Chiba – Japan's Narita and Haneda airports on Monday started the full-scale use of facial recognition, allowing international travelers to check in baggage and pass security checkpoints without showing passports or flight tickets. With the "Face Express" system aimed at speeding up the boarding process and providing a touchless experience for passengers, travelers need to have their photos taken at check-in when they register their passports and boarding passes upon arriving at the airports. After registering necessary data with special terminals, cameras at baggage check-in, security checkpoint entrances and boarding gates will automatically verify passengers' identity and allow them to pass through, Narita International Airport Corp. said. "The procedure (for boarding) ended quickly and the gate opened smoothly," said company employee Susumu Hayakawa, 29, before traveling on a Japan Airlines flight to Chicago from Narita Airport near Tokyo. The system fully came into service after Narita Airport started trialing the use of facial recognition in April, only involving airport staff and not actual travelers. It will also lead to reduced physical contact between travelers, machines, and airport and flight staff, helping to prevent the spread of virus infections, the airport operator has said.

Today, companies are using AI in every aspect of their businesses. The adoption of AI has been very influential especially in the finance and healthcare sectors, where the impact of implementing AI solutions is very significant. In the financial services, AI is playing a very important role to optimize processes ranging from credit decisions to quantitative trading to financial risk management. In healthcare, we are seeing a spike in adoption of conversational bots, automated diagnoses and predicting diseases. This increase in adoption is also causing a cultural shift in our relationship with AI.