Digital transformation in 2022 and beyond: These are the key trends

At the beginning of 2022 many parts of the world were adapting to living with the Covid-19 pandemic -- which is far from over and seems to be settling into a pattern of repeated new-variant waves and a relentless build-up of Long Covid. Digital transformation projects are about driving fundamental change across customer experience, tech and business culture. This ZDNet special report brings you the latest trends and insights you need to succeed. Then, in February, the Russian invasion of Ukraine delivered another global shock, further disrupting supply chains and pushing up energy prices. For businesses, the consequent rise in inflation and threat of recession has added further pressure after a difficult two-and-a-half years.

'Killer robots': Will they be banned? These aren't the drones that deliver your online order. Loaded with cameras, sensors, and explosives, their mission is to drive themselves to a target with an algorithm in the driver's seat. They destroy themselves along with the target, leaving behind just a pile of electronic detritus. Increasingly, these sorts of weapons are the stuff of a manufacturer's promotional materials rather than science fiction movies. From today, a United Nations conference of 80 countries gathers in Geneva to debate whether to ban them or at least regulate them more strictly.

The Ukrainian Army on Tuesday announced it had destroyed three more tanks belonging to the Russian army using only attack drones. The Security Service of Ukraine (SSU) said their officers successfully destroyed three T-72s, Russian battle tanks commonly used by the Soviet Army in the 1970s. The SSU did not specify when and where the attack happened. It is also unclear if there were any casualties. The SSU's report on the recent attack comes just days after it released an audio of an intercepted phone call where a Russian soldier, whose identity was not revealed, told his mother that Ukrainian soldiers who attacked their unit destroyed their tanks and killed more than a dozen comrades.

Microsoft suffered its slowest earnings growth in two years, hurt by a sharp slowdown in its cloud business, declining videogame sales and the effects of strong dollar. The company on Tuesday posted sales of $51.9 billion for its fiscal fourth-quarter, up 12% for the same period a year earlier, though below Wall Street expectations. Sales were affected by myriad other issues, including supply-chain disruptions in China, scaling back operations in Russia after the country's invasion of Ukraine and upheaval in the digital-advertising market.

'Artificial intelligence in rubber value chain will be a game changer'

The application of artificial intelligence (AI) in the rubber value chain will be a game changer in the nearest future and the sector can realise more value through predictive analytics, said Saji Gopinath, Vice-Chancellor, Kerala University of Digital Sciences, Innovation and Technology. The aggressive use of data transformation tools has resulted in new business models, facilitating new products and services that can generate greater utility and a new culture of management. Th Vice-Chancellor was speaking on'Efficient use of Artificial Intelligence and Block Chain Technology in Rubber Marketing' at the Indian Rubber Meet here during the weekend. John Baffes, Senior Agricultural Economist, Development Economics Prospects Group, World Bank, pointed out that non-energy prices are expected to rise 20 per cent in 2022, with the highest increase in commodities where Russia or Ukraine are key exporters. He further said the outlook depends on the duration of the war and the severity of disruptions to commodity flows. 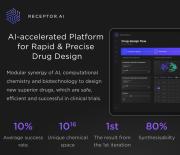 Artificial Intelligence (AI) in drug discovery is now on a steep rise. A growing number of companies compete to develop new drugs faster, cheaper, and with a much higher success rate by using AI tools at all crucial stages of the drug discovery pipeline. Most of the players in this quickly expanding market are oriented towards big pharma, which is routinely investing billions into drug development. Such a partnership is tempting not only for startup companies but also for established leaders in the field of AI-based drug development because it provides stable multi-year contracts backed up by the financial resources and infrastructure of the pharmaceutical giants. As a result, end-to-end AI-based drug discovery services are tailored for large corporate customers.

The Ukrainian army continues to defend its land against the invading Russians and has recently destroyed a Russian tank and killed more than a dozen soldiers as the war enters its sixth month, a new recording revealed. The Security Service of Ukraine (SSU) on Sunday released new audio of an intercepted phone call where a Russian soldier, whose identity was not revealed, recounted the attack to his mother. "Mom, we had such a'circus' today! At two o'clock in the morning – fifteen '200' [killed]. Because they all were watching a movie in the tank. They threw it [a projectile] into the turret from a drone! They just approached us, dropped the ammo, and it blew up," the soldier said.

DroneShield has announced it has signed a collaboration agreement with The Australian Missile Corporation (AMC), as the $1bn Guided Weapons and Explosive Ordnance (GWEO) enterprise enters the next phase. The AMC was one of the Australian-based GWEO enterprise panel partners invited by the Commonwealth Government in April to work with global missile manufacturing giants Lockheed Martin and Raytheon in establishing a local industry. Considered areas of cooperation between AMC and DroneShield include counterdrone security, prevalent in current battlefield as seen with the Ukraine war, as well as Electronic Warfare and associated Artificial Intelligence work. AMC's CEO, commented "We are pleased to cooperate with DroneShield, with its Australian sovereign capability, as we progress our GWEO program. Its world-leading technologies combined with its expertise in engineering and physics would be critical to the development of guided weapons in Australia."

The CEO of Turkey's Baykar, which makes the drones being widely used by Ukraine against Russian forces, has ruled out supplying the Bayraktar TB2 to Moscow. In an interview with CNN on Monday, Haluk Bayraktar said Ukraine is "under very heavy aggression and disproportionate attacks". When pressed by CNN presenter Julia Chatterley, who repeatedly asked, "Would you supply Russia?", Bayraktar responded: "We have not delivered or supplied them with anything, [and] we will as well never do such a thing because we support Ukraine, support its sovereignty, its resistance for its independence." Bayraktar said he is proud that Bayraktar TB2 has become one of the symbols of the Ukrainian resistance against Russia. "It's very touching," he said, hailing "years of cooperation" and "strong bonds" with Ukraine.

The next big security threat is staring us in the face. Tackling it is going to be tough

A video conference call taking place inside an office - but is the person on the other end of the call really who they say they are? A deepfake video uses artificial intelligence and deep-learning techniques to produce fake images of people or events. One recent example is when the mayor of Berlin thought he was having an online meeting with former boxing champion and current mayor of Kyiv, Vitali Klitschko. But the mayor of Berlin grew suspicious when'Klitschko' started saying some very out of character things relating to the invasion of Ukraine, and when the call was interrupted the mayor's office contacted the Ukrainian ambassador to Berlin – to discover that, whoever they were talking to, it wasn't the real Klitschko. The imposter also apparently spoke to other European mayors, but in each case it looks like they had been holding a conversation with a deepfake, an AI-generated false video that looks like a real human speaking. It's a sign that deepfakes are getting more advanced and quickly.