Russia's Artificial Intelligence Boom May Not Survive the War 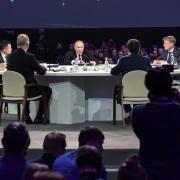 The last year was a busy one for Russia's military and civilian artificial intelligence efforts. Moscow poured money into research and development, and Russia's civil society debated the country's place in the larger AI ecosystem. But Vladimir Putin's invasion of Ukraine in February and the resulting sanctions have brought several of those efforts to a halt--and thrown into question just how many of its AI advancements Russia will be able to salvage and continue. Ever since Putin extolled the development of robotic combat systems in the new State Armaments Program in 2020, the Russian Ministry of Defense has been hyper-focused on AI. We have learned more about the Russian military's focus on AI in the past year thanks to several public revelations.

BUCHA, Ukraine--Searching for evidence in the killings of hundreds of people by Russian troops here, Ukrainian prosecutor Ruslan Kravchenko unlocked the double doors leading to a boiler room on the south side of town. The space had been used as an office by the occupying forces. Two weeks after Russia's retreat from areas around the Ukrainian capital, local and national authorities are embarking on a wide-ranging probe of alleged war crimes with the aim of building cases strong enough to persuade an international court to hold the Kremlin and its soldiers responsible.

If we are to be struck by an impact event resulting in human extinction, it would most likely occur in the Spring or Fall. If you were to ask 100 people what they believed the greatest risk to human civilization is I would bet the top 3 answers would be nuclear war, global pandemic and global warming/climate change. However, less than 10 years ago a meteor with a diameter of approximately 20 meters and a mass of 10,000 tons exploded 30 km over the city Chelyabinsk in Russia. Although there were no fatalities, the blast was estimated to have resulted in $30 million worth of damages and injured 1,500 people. About 100 years previously, in 1908, a meteor 50–60 meters in size exploded over Siberia with the power of a 12 megaton explosion which destroyed about 2,200 squared kilometers of forest.

Clearview AI claims to be the world's "largest facial network," drawing from a database of more than 10 billion images scraped from publicly-available websites, including social media profiles, for use by customers including law enforcement agencies. Ukrainian authorities are messaging relatives to suggest they come and collect the bodies, Federov told Reuters, adding that the percentage of soldiers the software had recognised claimed by families had been "high." The true number of Russian soldiers to have died in Ukraine is unknown. While the Russian defense ministry admitted 498 of its troops had been killed in early March, US and Ukrainian officials estimate the total number of deaths is significantly higher. Yesterday NATO released estimates that up to 40,000 Russian troops have been killed, wounded, taken prisoner, or gone missing.

Banks and other financial institutions utilizing artificial intelligence may be uniquely susceptible to retaliatory Russian cyberattacks as taxing international sanctions worsen, experts warn. Those fears, highlighted in a recent Wall Street Journal report, comes as Russia's war on Ukraine trundles forward into its second month and as an unprecedented barrage of international sanctions continue to chip away at the Russian economy. Global financial institutions have played an integral role in the sanctions regime from the start, blocking money flows from certain Russian banks, denying them access to international markets, and even freezing the assets of President Vladimir Putin and prominent Russian oligarchs. However, experts fear these same institutions' rapid reliance on machine learning-learning models to automate more and more of their systems in the name of efficiency could come back to bite them in the ass. Andrew Burt, a former policy adviser to the head of the cyber division at the FBI, described AI vulnerabilities as "significant and very widely overlooked" at many financial institutions that have come to rely on them.

In the wake of Russia's invasion of Ukraine, internet platforms have taken all sorts of action, like blocking accounts related to Russian state media or pulling out of the country altogether. But one move that seems far smaller has prompted a major backlash for DuckDuckGo, the privacy-focused search engine that has become popular on the right as an alternative to Google. Last week, Gabriel Weinberg announced that his company would be combatting Russian disinformation. "Like so many others I am sickened by Russia's invasion of Ukraine and the gigantic humanitarian crisis it continues to create," he wrote on Twitter. "At DuckDuckGo, we've been rolling out search updates that down-rank sites associated with Russian disinformation."

Recent developments in artificial intelligence (AI) and computer vision have resulted in the ability to create'fake people.' These people are either generated entirely from scratch by an AI or are made by digitally altering the appearance of actors that appear similar to them. A movement called RepresentUS recently tried to publish deep fake advertisements on several news outlets such as CNN and Fox News. The advertisements depicted Russian President Vladimir Putin and North Korean leader Kim Jong-un, both stating that Americans need to act in order to protect their democracy. The news station did not let these advertisements run and took them down shortly before being posted.

The search engine DuckDuckGo will be down-ranking sites that spread Russian propaganda and disinformation. In a tweet, founder and CEO Gabriel Weinberg wrote that the privacy-focused search engine would be releasing updates that would ensure Russian disinformation sites rank further down in search results. Earlier this month, DuckDuckGo announced it would pause its relationship with Russian-state owned search engine Yandex. Even if it's for the right reasons, putting a thumb on the scales of search results is an uncharacteristic move for the Pennsylvania-based search company. Unlike Google and major social media platforms, DuckDuckGo has neglected to filter out misleading content on vaccines or elections.

Tech companies are continuing to take action as Russia's war in Ukraine rages on. Search engine DuckDuckGo is the latest platform to take measures in the information war that's being battled online. According to DuckDuckGo's founder and CEO, Gabriel Weinberg, the privacy-focused search engine has "down-ranked" websites in its search results that are "associated with Russian disinformation." "Like so many others I am sickened by Russia's invasion of Ukraine and the gigantic humanitarian crisis it continues to create. To those unfamiliar with DuckDuckGo, the move may not feel too out of the ordinary. Social media platforms like Facebook and Twitter have updated their policies to deal with disinformation about Russia's war. Search engines like Google and even Microsoft's Bing have taken actions against disinformation, too. However, the overwhelming response to Weinberg's tweets about the "down-rankings" has been outrage from DuckDuckGo's user base. Some even claim to have already changed their default search engine preference due to this decision. "Can you see how swiftly most of your user base has been put off by this announcement?" "Loyal long time supporters are talking about abandoning the service.