First fleet of driverless taxis is launching in Beijing with rides costing $4.60

A leading Chinese Internet company rolled out a fleet of fully driverless robot taxis on Sunday. Ten Apollo Go Robotaxis started picking up passengers in west Beijing, charging approximately $4.60 per ride. Developed by Baidu, they're the first paid autonomous taxis in China that don't have a safety driver behind the steering wheel. The vehicles are programmed with eight destinations in Shougang Park, home of the upcoming 2022 Winter Olympics. However, there is a remote operator on hand that can assume control of the vehicle in case of emergency.

Baidu has announced that its fully driverless autonomous taxi service will be hitting the streets of Beijing from May 2, making it the first available paid robotaxi service in China. Its Apollo Go service will initially be available at Shougang Park -- one of the venues for the 2022 Beijing Winter Olympics -- where passengers can travel between sport halls, work areas, coffee shops, hotels, and be available to shuttle athletes and staff during the Olympics. Using the Apollo Go app, passengers can locate a self-driving taxi in the vicinity and hail a driverless ride through a self-service process. Once the car arrives, users are required to scan a QR code and health code on the car for identify verification and COVID-19 contact tracing before the doors of the autonomous unlock. Once a passenger has boarded, they push the "start the journey" button for the ride to begin.

Robotic process automation has become buzzy in the last few months. New York-based UiPath is on course to launch an initial public offering after gaining an astounding valuation of $35 billion in February. Over in China, homegrown RPA startup Laiye is making waves as well. Laiye, which develops software to mimic mundane workplace tasks like keyboard strokes and mouse clicks, announced it has raised $50 million in a Series C round. The proceeds came about a year after the Beijing-based company pulled in the first tranche of its Series C round. 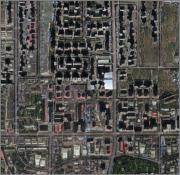 What may appear to be an image of Tacoma is, in fact, a simulated one, created by transferring visual patterns of Beijing onto a map of a real Tacoma neighborhood. A fire in Central Park seems to appear as a smoke plume and a line of flames in a satellite image. Colorful lights on Diwali night in India, seen from space, seem to show widespread fireworks activity. Both images exemplify what a new University of Washington-led study calls "location spoofing." The photos -- created by different people, for different purposes -- are fake but look like genuine images of real places. And with the more sophisticated AI technologies available today, researchers warn that such "deepfake geography" could become a growing problem.

Former Secretary of State Mike Pompeo, PayPal co-founder Peter Thiel and former National Security advisor Robert C. O'Brien weigh in on facing the Chinese Communist Party Paypal co-founder and Facebook board member Peter Thiel spared no punches in who he cites for helping China's rapid economic and military expansion. He says that U.S. technology companies bear some of the blame for helping fuel Beijing's global achievements. "There's something about the woke politics inside these companies, the way they think of themselves as not really American companies. And it's somehow very, very difficult for them to have a sharp anti-China edge whatsoever," he says. Theil named Facebook, Google, Amazon, Microsoft and Apple in his assessment that American corporate culture has turned a blind eye to the communist country's human rights abuses, trade infractions and threat at the expense of the U.S. "If China is able to just catch up, there is a way in which it will become a more powerful country," warned Thiel.

China enlisted surveillance firms to help draw up standards for mass facial recognition systems, researchers said on Tuesday, warning that an unusually heavy emphasis on tracking characteristics such as ethnicity created wide scope for abuse. The technical standards, published by surveillance research group IPVM, specify how data captured by facial recognition cameras across China should be segmented by dozens of characteristics -- from eyebrow size to skin color and ethnicity. "It's the first time we've ever seen public security camera networks that are tracking people by these sensitive categories explicitly at this scale," said the report's author, Charles Rollet. The standards are driving the way surveillance networks are being built across the country -- from residential developments in the capital, Beijing, to police systems in the central province of Hubei, he said. In one instance, the report cites a November 2020 tender for a small "smart" housing project in Beijing, requiring suppliers for its surveillance camera system to meet a standard that allows sorting by skin tone, ethnicity and hairstyle.

China and U.S. to work on climate, Beijing says after rancorous meeting

Beijing – China and the United States will set up a joint working group on climate change, China's official Xinhua News Agency said, in a potentially positive takeaway from what was an unusually rancorous high-level meeting. The top Chinese and U.S. diplomats, in their first meeting of Joe Biden's presidency on Thursday and Friday, publicly rebuked each other's policies at the start of what Washington called "tough and direct" talks in Alaska. But the Chinese delegation said after the meeting the two sides were "committed to enhancing communication and cooperation in the field of climate change," Xinhua said on Saturday. They would also hold talks to facilitate the activities of diplomats and consular missions, "as well as on issues related to media reporters in the spirit of reciprocity and mutual benefit," the report said. The U.S. Embassy in Beijing did not immediately respond to an email seeking comment on Sunday.

After it first started testing autonomous vehicles in Cangzhou, China last summer, Baidu has now obtained the necessary permits to experiment with how it will monetize those vehicles. The city, located about 149 miles south of Beijing, granted the company's Apollo Go robotaxi service permission to run commercialization tests with 35 cars and an additional 10 permits with which to trial fully driverless vehicles Baidu says the permits will allow it to become the first company in China to start testing a paid robotaxi offering. So far, it has offered those rides to people for free, marking this an important milestone in its goal to commercialize the service. It's also the first company in Cangzhou to earn permission to test fully driverless vehicles on the city's roads. Previously, its testing in the city involved safety drivers in the cars.

Avatarify, an AI face animator app that has gone viral in TikTok videos, has been removed from Apple's China app store, and analysts said the move was mainly due to concerns about invasion of privacy. "The potential risk of invasion of privacy is the major reason behind the removal of AI apps like Avatarify," said Qin An, head of the Beijing-based Institute of China Cyberspace Strategy, on Monday. Unscrupulous individuals or groups might make money from these apps by using them to attract the public's attention first and then violating personal privacy, according to Qin. Qin's comments came after Avatarify - a face-changing app adopting artificial intelligence (AI) to allow users to replace their own faces with other people's faces for photography and videos - was removed from Apple's China app store. The app started trending on February 17 and ranked first on February 28 with more than 1.5 million downloads, according to a report by thepaper.cn. Chinese netizens have used the app to make funny videos, which went viral and started trending on Douyin, the Chinese version of TikTok.