Join the wireless revolution with Bluetooth earbuds on sale for $30

TL;DR: Get lost in the music with the EarBurst 2 Wireless Earbuds for 50% off as of Aug. 30. You can grab a pair for only $29.99. Every device seems to be ditching cords and cables for a more convenient alternative -- chargers, TV channels, and of course, earbuds. But with this revolution, wireless earbuds have become a dime a dozen. Some pairs are worth a second look, though, like the EarBurst 2 Wireless Earbuds.

The best wireless earbuds you can buy right now

In the last two years, true wireless earbuds have made quite the leap. There's no doubt the popularity of Apple's AirPods helped make these headphones a mainstay, but companies' ability to offer reliable connectivity, great sound and active noise cancellation (ANC) in an increasingly smaller form factor has hastened widespread adoption. You can also get features that used to be reserved for premium models on mid-range devices. Of course, the popularity means that new earbuds are popping up all the time and the list of options is longer than ever. To help, we've compiled the best wireless earbuds you can buy right now, including noteworthy features for each selection.

All the best Prime Day deals that are still available (plenty!)

Amazon's New Buds Make It Easier to Summon Alexa Than Ever

If you're in love with Alexa, Amazon's first-generation Echo Buds were a great pair of headphones. Sure, they didn't have the same sound quality or noise-canceling abilities as premium options from Apple and Samsung, but they were cheap, decent, and worked better with Amazon's voice assistant than any other pair. Wireless charging and noise-canceling join a brand-new pair of 5.7-mm drivers and beamforming microphones to create what's probably the best overall experience in wireless earbuds below $150. Add to that some of the best app integration available today, and the new Echo Buds are some of my favorite jack-of-all-trades headphones. The new Echo Buds don't really resemble their predecessors, apart from being made from the same matte plastic.

Google's Pixel Buds A are cheaper but mostly unchanged

Wireless earbuds have only gotten better, cheaper, and more abundant since Apple first introduced AirPods in 2016. Over the years, we've seen thoe earbuds go from being the biggest name in the game to just one of many, thanks to legit competition from the likes of Google, Samsung, and Amazon. With the new Pixel Buds A-Series earbuds, Google is bringing serious heat and value to the space, especially for Android users. You'd be forgiven for thinking these are exactly the same as the Pixel Buds Google released in 2020. They're nearly identical in appearance and performance, and Google hasn't added much in the way of flashy new features to entice would-be buyers.

Amazon's Echo Buds: Are they a good alternative to Apple's AirPods?

Confession time: I really enjoy using AirPods. I got them as a Christmas gift, and have consistently worn them ever since. But Amazon has come pretty close to giving my choice of wireless earbuds a second thought with the release of its second-generation Echo Buds. They fit really well, sound great, and offer a lot of what AirPods give you at a lower price. My history with wireless earbud wearing hasn't been great.

It's no secret that Amazon's first attempt at carving its way into the wireless earbuds market was a dud. The original Echo Buds didn't impress us with their chunky size and lack of real active noise cancellation, not to mention their brief overheating problem. I'll cut right to the chase and tell you the follow-up was worth the wait. Amazon's new Echo Buds deliver good sound quality, effective ANC, and a slimmed down build for a startlingly low price of $119.99. If you've been looking for a device-agnostic pair of wireless earbuds that will drown out the world around you, look no further.

Today I have another amazing Kickstarter success story for you. There are so many amazing products available on Kickstarter right now including self-cleaning water bottles and lightweight jackets suitable for any temperature and weather. Today, however, I am sharing with you the Mobi Hybrid Active Noise Cancelling 100 hr. Wireless Earbuds which was fully funded in just one hour on Kickstarter and exceeded $50,000 in less than one week, absolutely smashing their original funding target! Read on to learn why people are backing these earbuds and what makes them unique. 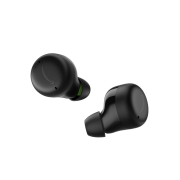 Amazon's Echo Buds didn't impress us much in 2019, to paraphrase Shania Twain. Now, the empire that Jeff Bezos built is back with a second attempt at in-house wireless earbuds slated for this spring. And they might be what we were looking for the first time around. The new Echo Buds address perhaps the biggest problem with the bulky first-gen model right away, with a slightly different form factor that Amazon says is 20 percent smaller. The stem's size has been reduced to hopefully improve in-ear comfort and the formerly glossy black exterior panel is now matte.

While this week was peppered with limited-time sales, there remain a number of discounted gadgets available today. Apple's MacBook Pro M1 returned to its all-time-low price of $950 and the new, swiveling Echo Show 10 received its first discount since debuting in February. Amazon knocked down the prices of its Fire tablets, too, including the Fire HD 10, which is still $55 off. Here are the best tech deals from this week that you can still get today. This is the base model with the new M1 processor, 8GB of RAM and 256GB of storage.