Large-scale industrial recommender systems are usually confronted with computational problems due to the enormous corpus size. To retrieve and recommend the most relevant items to users under response time limits, resorting to an efficient index structure is an effective and practical solution. The previous work Tree-based Deep Model (TDM) \cite{zhu2018learning} greatly improves recommendation accuracy using tree index. By indexing items in a tree hierarchy and training a user-node preference prediction model satisfying a max-heap like property in the tree, TDM provides logarithmic computational complexity w.r.t. the corpus size, enabling the use of arbitrary advanced models in candidate retrieval and recommendation. In tree-based recommendation methods, the quality of both the tree index and the user-node preference prediction model determines the recommendation accuracy for the most part.

What are Data Pipelines ?

If you have learned temporal parallelism used to speed up CPU execution, you came across instruction pipelines aka pipeline processing. In pipeline processing, you will have many instructions in different stages of execution. The term "Data Pipeline" is a misnomer representing a high bandwidth communication channel used for data transportation between a source system and a destination. In certain cases the destination is called a sink. Pipelines by definition allow flow of a fluid automatically from one end to the other end, when one end is connected to a source.

As machine learning algorithms are increasingly deployed for high-impact automated decision making, ethical and increasingly also legal standards demand that they treat all individuals fairly, without discrimination based on their age, gender, race or other sensitive traits. In recent years much progress has been made on ensuring fairness and reducing bias in standard machine learning settings. Yet, for network embedding, with applications in vulnerable domains ranging from social network analysis to recommender systems, current options remain limited both in number and performance. We thus propose DeBayes: a conceptually elegant Bayesian method that is capable of learning debiased embeddings by using a biased prior. Our experiments show that these representations can then be used to perform link prediction that is significantly more fair in terms of popular metrics such as demographic parity and equalized opportunity. 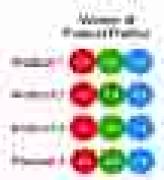 How do we know the profile of each of our products? A product's profile should represent the key underlying characteristics of the product, especially the ones that users care about. A very simple product profile would just be the category. For example for books, the profiles would be history, fantasy, science fiction, nonfiction, biography, romance, humor, etc. Quantitatively, books would just be represented something like this: And we would try to find out what categories (genres) our customers liked to read. Let's say we go with approach 2 -- Jeremy gives us a list of 7 fantasy books and 3 romance books.

Point-of-Interest (POI) recommendation has been extensively studied and successfully applied in industry recently. However, most existing approaches build centralized models on the basis of collecting users' data. Both private data and models are held by the recommender, which causes serious privacy concerns. In this paper, we propose a novel Privacy preserving POI Recommendation (PriRec) framework. First, to protect data privacy, users' private data (features and actions) are kept on their own side, e.g., Cellphone or Pad. Meanwhile, the public data need to be accessed by all the users are kept by the recommender to reduce the storage costs of users' devices. Those public data include: (1) static data only related to the status of POI, such as POI categories, and (2) dynamic data depend on user-POI actions such as visited counts. The dynamic data could be sensitive, and we develop local differential privacy techniques to release such data to public with privacy guarantees. Second, PriRec follows the representations of Factorization Machine (FM) that consists of linear model and the feature interaction model. To protect the model privacy, the linear models are saved on users' side, and we propose a secure decentralized gradient descent protocol for users to learn it collaboratively. The feature interaction model is kept by the recommender since there is no privacy risk, and we adopt secure aggregation strategy in federated learning paradigm to learn it. To this end, PriRec keeps users' private raw data and models in users' own hands, and protects user privacy to a large extent. We apply PriRec in real-world datasets, and comprehensive experiments demonstrate that, compared with FM, PriRec achieves comparable or even better recommendation accuracy.

Nowadays, privacy preserving machine learning has been drawing much attention in both industry and academy. Meanwhile, recommender systems have been extensively adopted by many commercial platforms (e.g. Amazon) and they are mainly built based on user-item interactions. Besides, social platforms (e.g. Facebook) have rich resources of user social information. It is well known that social information, which is rich on social platforms such as Facebook, are useful to recommender systems. It is anticipated to combine the social information with the user-item ratings to improve the overall recommendation performance. Most existing recommendation models are built based on the assumptions that the social information are available. However, different platforms are usually reluctant to (or cannot) share their data due to certain concerns. In this paper, we first propose a SEcure SOcial RECommendation (SeSoRec) framework which can (1) collaboratively mine knowledge from social platform to improve the recommendation performance of the rating platform, and (2) securely keep the raw data of both platforms. We then propose a Secret Sharing based Matrix Multiplication (SSMM) protocol to optimize SeSoRec and prove its correctness and security theoretically. By applying minibatch gradient descent, SeSoRec has linear time complexities in terms of both computation and communication. The comprehensive experimental results on three real-world datasets demonstrate the effectiveness of our proposed SeSoRec and SSMM.

Recommendation from implicit feedback is a highly challenging task due to the lack of the reliable observed negative data. A popular and effective approach for implicit recommendation is to treat unobserved data as negative but downweight their confidence. Naturally, how to assign confidence weights and how to handle the large number of the unobserved data are two key problems for implicit recommendation models. However, existing methods either pursuit fast learning by manually assigning simple confidence weights, which lacks flexibility and may create empirical bias in evaluating user's preference; or adaptively infer personalized confidence weights but suffer from low efficiency. To achieve both adaptive weights assignment and efficient model learning, we propose a fast adaptively weighted matrix factorization (FAWMF) based on variational auto-encoder. The personalized data confidence weights are adaptively assigned with a parameterized neural network (function) and the network can be inferred from the data. Further, to support fast and stable learning of FAWMF, a new specific batch-based learning algorithm fBGD has been developed, which trains on all feedback data but its complexity is linear to the number of observed data. Extensive experiments on real-world datasets demonstrate the superiority of the proposed FAWMF and its learning algorithm fBGD.

Machine learning methods allow us to make recommendations to users in applications across fields including entertainment, dating, and commerce, by exploiting similarities in users' interaction patterns. However, in domains that demand protection of personally sensitive data, such as medicine or banking, how can we learn such a model without accessing the sensitive data, and without inadvertently leaking private information? We propose a new federated approach to learning global and local private models for recommendation without collecting raw data, user statistics, or information about personal preferences. Our method produces a set of prototypes that allows us to infer global behavioral patterns, while providing differential privacy guarantees for users in any database of the system. By requiring only two rounds of communication, we both reduce the communication costs and avoid the excessive privacy loss associated with iterative procedures. We test our framework on synthetic data as well as real federated medical data and Movielens ratings data. We show local adaptation of the global model allows our method to outperform centralized matrix-factorization-based recommender system models, both in terms of accuracy of matrix reconstruction and in terms of relevance of the recommendations, while maintaining provable privacy guarantees. We also show that our method is more robust and is characterized by smaller variance than individual models learned by independent entities.

Advances in Collaborative Filtering and Ranking

In this dissertation, we cover some recent advances in collaborative filtering and ranking. In chapter 1, we give a brief introduction of the history and the current landscape of collaborative filtering and ranking; chapter 2 we first talk about pointwise collaborative filtering problem with graph information, and how our proposed new method can encode very deep graph information which helps four existing graph collaborative filtering algorithms; chapter 3 is on the pairwise approach for collaborative ranking and how we speed up the algorithm to near-linear time complexity; chapter 4 is on the new listwise approach for collaborative ranking and how the listwise approach is a better choice of loss for both explicit and implicit feedback over pointwise and pairwise loss; chapter 5 is about the new regularization technique Stochastic Shared Embeddings (SSE) we proposed for embedding layers and how it is both theoretically sound and empirically effectively for 6 different tasks across recommendation and natural language processing; chapter 6 is how we introduce personalization for the state-of-the-art sequential recommendation model with the help of SSE, which plays an important role in preventing our personalized model from overfitting to the training data; chapter 7, we summarize what we have achieved so far and predict what the future directions can be; chapter 8 is the appendix to all the chapters.

Recommender systems today have become an essential component of any commercial website. Collaborative filtering approaches, and Matrix Factorization (MF) techniques in particular, are widely used in recommender systems. However, the natural data sparsity problem limits their performance where users generally interact with very few items in the system. Consequently, multiple hybrid models were proposed recently to optimize MF performance by incorporating additional contextual information in its learning process. Although these models improve the recommendation quality, there are two primary aspects for further improvements: (1) multiple models focus only on some portion of the available contextual information and neglect other portions; (2) learning the feature space of the side contextual information needs to be further enhanced. In this paper, we propose a Collaborative Dual Attentive Autoencoder (CATA++) for recommending scientific articles. CATA++ utilizes an article's content and learns its latent space via two parallel autoencoders. We use attention mechanism to capture the most pertinent part of information in making more relevant recommendations. Comprehensive experiments on three real-world datasets have shown that our dual-way learning strategy has significantly improved the MF performance in comparison with other state-of-the-art MF-based models according to various experimental evaluations. The source code of our methods is available at: https://github.com/jianlin-cheng/CATA.