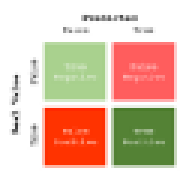 Classifier metrics are metrics used to evaluate the performance of machine learning classifiers -- models that put each training example into one of several discrete categories. Confusion Matrix is a matrix used to indicate a classifier's predictions on labels. It contains four cells, each corresponding to one combination of a predicted true or false and an actual true or false. Many classifier metrics are based on the confusion matrix, so it's helpful to keep an image of it stored in your mind. Sensitivity/Recall is the number of positives that were accurately predicted.

Thang present a novel method for learning from unlabeled data and more specifically semi-supervised learning methods. These methods were used to generate Google Meena Chatbot model. Like Snorkel this is used to quickly building classifiers of datasets that would be otherwise extremely time-consuming (and expensive) to label by hand for training purposes. Gandalf: Azure machine learning system trained to catch bad rollout deployment. The aims of this system is to catch bad deployment before they can have ripple effects across the whole system.

In this figure, the leaf nodes are the scores generated by the model, as inferred from the training examples residing in those leaf nodes. In this decision tree, $123.56 foreign transaction is scored at a risk level of 200, while a $123.57 For a one-penny difference in amount, the gradient is then 70,000 score points/dollar, an output variance that is wildly disproportionate to 1¢ difference in inputs. This example vividly illustrates that with the data science--and business--world's increasing emphasis on the explainability, reliability, and consistency of models used for decisioning, decision trees simply lose a lot of their palatability.

Yann LeCun and Yoshua Bengio: Self-supervised learning is the key to human-level intelligence

Self-supervised learning could lead to the creation of AI that's more human-like in its reasoning, according to Turing Award winners Yoshua Bengio and Yann LeCun. Bengio, director at the Montreal Institute for Learning Algorithms, and LeCun, Facebook VP and chief AI scientist, spoke candidly about this and other research trends during a session at the International Conference on Learning Representation (ICLR) 2020, which took place online. Supervised learning entails training an AI model on a labeled data set, and LeCun thinks it'll play a diminishing role as self-supervised learning comes into wider use. Instead of relying on annotations, self-supervised learning algorithms generate labels from data by exposing relationships among the data's parts, a step believed to be critical to achieving human-level intelligence. "Most of what we learn as humans and most of what animals learn is in a self-supervised mode, not a reinforcement mode. It's basically observing the world and interacting with it a little bit, mostly by observation in a test-independent way," said LeCun.

The state Department of Health Services reported the latest figures on Tuesday, three weeks after the April 7 presidential primary and spring election that drew widespread concern because of voters waiting in long lines to cast ballots in Milwaukee. Democratic Gov. Tony Evers tried to move to a mail-order election but was blocked by the Republican Legislature and conservative controlled Wisconsin Supreme Court.

What's Next in AI? Self-supervised Learning

Self-supervised learning is one of those recent ML methods that have caused a ripple effect in the data science network, yet have so far been flying under the radar to the extent Entrepreneurs and Fortunes of the world go; the overall population is yet to find out about the idea yet lots of AI society consider it progressive. The paradigm holds immense potential for enterprises too as it can help handle deep learning's most overwhelming issue: data/sample inefficiency and subsequent costly training. Yann LeCun said that if knowledge was a cake, unsupervised learning would be the cake, supervised learning would be the icing on the cake and reinforcement learning would be the cherry on the cake. We realize how to make the icing and the cherry, however, we don't have a clue how to make the cake." Unsupervised learning won't progress a lot and said there is by all accounts a massive conceptual disconnect with regards to how precisely it should function and that it was the dark issue of ...

A Visual Guide to Self-Labelling Images

In the past year, several methods for self-supervised learning of image representations have been proposed. A recent trend in the methods is using Contrastive Learning (SimCLR, PIRL, MoCo) which have given very promising results. However, as we had seen in our survey on self-supervised learning, there exist many other problem formulations for self-supervised learning. Combine clustering and representation learning together to learn both features and labels simultaneously. A paper Self-Labelling(SeLa) presented at ICLR 2020 by Asano et al. of the Visual Geometry Group(VGG), University of Oxford has a new take on this approach and achieved the state of the art results in various benchmarks.

How Microsoft Set A New Benchmark To Track Fake News

Researchers from Microsoft, along with a team from Arizona State University, have published a work that has outperformed the current state-of-the-art models that detect fake news. Though the prevalence and promotion of misinformation have been since time immemorial, today, thanks to the convenience for access provided by the internet, fake news is rampant and has affected healthy conversations. Given the rapidly evolving nature of news events and the limited amount of annotated data, state-of-the-art systems on fake news detection face challenges due to the lack of large numbers of annotated training instances that are hard to come by for early detection. In this work, the authors exploited multiple weak signals from different user engagements. They call this approach multi-source weak social supervision or MWSS.

In a paper scheduled to be presented at the upcoming International Conference on Learning Representations, Amazon researchers propose an AI approach that greatly improves performance on certain meta-learning tasks (i.e., tasks that involve both accomplishing related goals and learning how to learn to perform them). They say it can be adapted to new tasks with only a handful of labeled training examples, meaning a large corporation could use it to, for example, extract charts and captions from scanned paperwork. In conventional machine learning, a model trains on a set of labeled data (a support set) and learns to correlate features with the labels. It's then fed a separate set of test data (a query set) and evaluated based on how well it predicts that set's labels. By contrast, during meta learning, an AI model learns to perform tasks with their own sets of training data and test data and the model sees both.