How will AI impact the future of businesses and society?

At a time when India is trying to rekindle productivity and growth, AI promises to fill the gap. AI can boost profitability and transform businesses across sectors through systems that can learn, adapt and evolve with changing times. Such systems are increasingly important in a post-pandemic world where scalable AI solutions may be able to help organizations be prepared even during unprecedented situations. As organisations are working hard to re-architect themselves by changing their business models and technology architecture to survive in the pandemic world, it is time for them to invest in scalable AI solutions to achieve their goals faster. At the same time, technologists and businesses across the world have to advocate for the responsible use of AI. 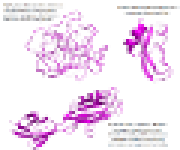 In a nutshell, proteins are linear chains of multiple amino acids, each of which consists in a constant unit of 4 non-hydrogen atoms plus a sidechain of variable size, ranging from none to around 20 atoms. The amino acids are connected through the constant unit, called backbone, to form a polypeptide that does not remain random but rather acquires one or more arrangements in space. That is, they fold into 3D structures. What exact structure a protein will adopt in 3D depends essentially on the identity of the amino acid sidechains, i.e. its amino acid sequence. Very briefly and simplifying definitions that are quite more complex, amino acid sequences are encoded by genes; the collection of genes of an organism is its genome; and the collection of proteins encoded in a genome is the proteome. To be more precise, and this will be important later, the polypeptide actually can fold into multiple substructures, each of which is called a domain.

Will Artificial Intelligence Help Us Grieve?

When a loved one passes, will we continue to communicate with the deceased through artificial intelligence? While that sounds like an episode of Black Mirror, the beginnings of a digital afterlife with some potentially positive ramifications recently took place with one man, as Jason Fagone reports in the San Francisco Chronicle. His story centers around writer Joshua Barbeau, a 33-year old who had lost his fiancee eight years earlier from a rare liver disease. At home one night, he accessed a site called Project December. As Fagone notes, the site is "powered by one of the world's most capable artificial intelligence systems, a piece of software known as GPT-3. It knows how to manipulate human language, generating fluent English text in response to a prompt."

This report presents a hands-on introduction to natural language processing (NLP) of radiology reports with deep neural networks in Google Colaboratory (Colab) to introduce readers to the rapidly evolving field of NLP. The implementation of the Google Colab notebook was designed with code hidden to facilitate learning for noncoders (ie, individuals with little or no computer programming experience). The data used for this module are the corpus of radiology reports from the Indiana University chest x-ray collection available from the National Library of Medicine's Open-I service. The module guides learners through the process of exploring the data, splitting the data for model training and testing, preparing the data for NLP analysis, and training a deep NLP model to classify the reports as normal or abnormal. Concepts in NLP, such as tokenization, numericalization, language modeling, and word embeddings, are demonstrated in the module.

Artificial intelligence projects in healthcare: 10 practical tips for success in a clinical environment

There is much discussion concerning ‘digital transformation’ in healthcare and the potential of artificial intelligence (AI) in healthcare systems. Yet it remains rare to find AI solutions deployed in routine healthcare settings. This is in part due to the numerous challenges inherent in delivering an AI project in a clinical environment. In this article, several UK healthcare professionals and academics reflect on the challenges they have faced in building AI solutions using routinely collected healthcare data. These personal reflections are summarised as 10 practical tips. In our experience, these are essential considerations for an AI healthcare project to succeed. They are organised into four phases: conceptualisation, data management, AI application and clinical deployment. There is a focus on conceptualisation, reflecting our view that initial set-up is vital to success. We hope that our personal experiences will provide useful insights to others looking to improve patient care through optimal data use. No data are available to share.

ARTIFICIAL INTELLIGENCE, A TRANSFORMATIONAL FORCE FOR THE HEALTHCARE INDUSTRY

Artificial Intelligence or AI is the use of algorithms that simulates human behavior to perform cognitive functions. Use AI to solve problems through interaction, learning, visual perception, planning, reasoning, and natural language processing. Artificial Intelligence is a broad and generic term like any other computer software program which engages human-like processes. Thus, calling an application AI might be correct but will not cover its specifics. The most widely available notion about AI is emerging out of a sci-fi movie.

The field of neuromarketing is still in its infancy, but it's growing fast as the ability to track and monitor consumer brain activity becomes more widespread. While American companies have been pioneers in this field, many European businesses are just now starting to hop on board with neuromarketing research techniques. This article will serve as a quick guide for companies looking to implement neuromarketing principles and tactics into their marketing research endeavors. Neuromarketing is the study of human brain activity that is triggered by exposure to stimuli in marketing research. This could include exposing participants to products, websites, advertisements, or packaging in order to determine how each stimulus elicits a physical or emotional response.

Detection and Semiquantitative Analysis of Cardiomegaly, Pneumothorax, and Pleural Effusion on Chest Radiographs

To develop and evaluate deep learning models for the detection and semiquantitative analysis of cardiomegaly, pneumothorax, and pleural effusion on chest radiographs. In this retrospective study, models were trained for lesion detection or for lung segmentation. The first dataset for lesion detection consisted of 2838 chest radiographs from 2638 patients (obtained between November 2018 and January 2020) containing findings positive for cardiomegaly, pneumothorax, and pleural effusion that were used in developing Mask region-based convolutional neural networks plus Point-based Rendering models. Separate detection models were trained for each disease. The second dataset was from two public datasets, which included 704 chest radiographs for training and testing a U-Net for lung segmentation.