An image classifier with Deep-Learning

Getting young children to tidy up their rooms is often challenging. What I insist is messy, they will insist is clean enough. After all, all adjectives are subjective and I want my children to grow up respecting others' opinion in our inclusive society. How do you put some definition around differences in opinion? An objective way to achieve this distinction is using image classification to differentiate between a clean versus a messy room.

Transfer your handwritten notes to your computer with this genius pen

In 2018, practically every mundane, household item can possess smart qualities. Your vacuum can move on its own. You can control your coffee maker through an app. There's even a virtual, personal assistant that can order you pizza, play music, and recite the weather forecast. But there are some tasks that are done just as well -- if not, better -- than their fancy, hi-tech alternatives. 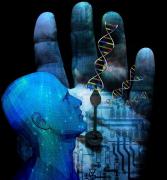 Imagine becoming gravely ill and yet being able to receive an accurate diagnosis with a recommended treatment plan in just 10 minutes. This is actually happening now with the help of Artificial Intelligence (AI). The University of Tokyo recently reported that Watson, IBM's cognitive supercomputer, correctly diagnosed a rare form of leukemia in a 60-year-old woman. Doctors originally thought the woman had acute myeloid leukemia, but after examining 20 million cancer research papers in 10 minutes, Watson was able to correctly determine the actual disease and recommend a personalized treatment plan. AI – and its related applications, Machine Learning (ML) and Deep Learning (DL) – are changing healthcare as we know it. The advancements made in AI will revolutionize research and, ultimately, personalized medicine.

Late last year, I lamented that Google didn't make Chromebooks a priority over the holiday season. With Android apps and the Google Play Store coming to the platform, it seemed like a perfect time to push Chrome OS. As this morning's leak showed, I just needed to wait another month: Samsung and Google have just announced the Chromebook Plus and Chromebook Pro, a pair of laptops that strive to present the best Chrome OS experience a user can have. Let's get the difference between the two models out of the way early: The cheaper Chromebook Plus uses an ARM processor while the Chromebook Pro features an Intel Core M3 processor. Neither is the most powerful out there, but in my quick tests, the Chromebook Pro seemed plenty snappy.

Cluster analysis is a staple of unsupervised machine learning and data science. It is very useful for data mining and big data because it automatically finds patterns in the data, without the need for labels, unlike supervised machine learning. In a real-world environment, you can imagine that a robot or an artificial intelligence won't always have access to the optimal answer, or maybe there isn't an optimal correct answer. You'd want that robot to be able to explore the world on its own, and learn things just by looking for patterns. Do you ever wonder how we get the data that we use in our supervised machine learning algorithms?

In recent years, we've seen a resurgence in AI, or artificial intelligence, and machine learning. Machine learning has led to some amazing results, like being able to analyze medical images and predict diseases on-par with human experts. Google's AlphaGo program was able to beat a world champion in the strategy game go using deep reinforcement learning. Machine learning is even being used to program self driving cars, which is going to change the automotive industry forever. Imagine a world with drastically reduced car accidents, simply by removing the element of human error.

This is the 3rd part in my Data Science and Machine Learning series on Deep Learning in Python. At this point, you already know a lot about neural networks and deep learning, including not just the basics like backpropagation, but how to improve it using modern techniques like momentum and adaptive learning rates. You've already written deep neural networks in Theano and TensorFlow, and you know how to run code using the GPU. This course is all about how to use deep learning for computer vision using convolutional neural networks. These are the state of the art when it comes to image classification and they beat vanilla deep networks at tasks like MNIST.

Like the course I just released on Hidden Markov Models, Recurrent Neural Networks are all about learning sequences - but whereas Markov Models are limited by the Markov assumption, Recurrent Neural Networks are not - and as a result, they are more expressive, and more powerful than anything we've seen on tasks that we haven't made progress on in decades. So what's going to be in this course and how will it build on the previous neural network courses and Hidden Markov Models? In the first section of the course we are going to add the concept of time to our neural networks. I'll introduce you to the Simple Recurrent Unit, also known as the Elman unit. We are going to revisit the XOR problem, but we're going to extend it so that it becomes the parity problem - you'll see that regular feedforward neural networks will have trouble solving this problem but recurrent networks will work because the key is to treat the input as a sequence.

Ahmad Khan Rahami, the man suspected of planting a series of bombs in New York and New Jersey over the weekend, praised Anwar Awlaki in handwritten notes found on his person after he was wounded in a shootout Monday. FBI agents recovered a notebook from Rahami after he was wounded by police in Linden, N.J., a U.S. official told the Los Angeles Times. In the notebook, Rahami describes his affinity for Awlaki, the American-born Islamic cleric who became a leader of Al Qaeda in Yemen. Awlaki was killed in a CIA drone strike in 2011, but his legacy has spread among jihadists thanks to online audio and video sermons. The notebook also contained ramblings about the Boston Marathon bombers, the official said.