Here comes the good bit. We will create an image with the content and style of the images below. For the implementation section of this article, we will be utilizing a bunch of tools and libraries for loading images and performing data transformation. First, we will import the tools and libraries required. Next, we declare two variables that hold the directory path to images for the content and style of our output result.

How to Get Beautiful Results with Neural Style Transfer

Most of the Gatys et al. paper which introduced Neural Style Transfer is simple and straightforward to understand. However, one question that does not get addressed is why the Gram matrix is a natural way to represent style (i.e. At a high level, the Gram matrix measures the correlations between different feature maps in the same layer. A feature map is simply the post-activation output of a convolutional layer. For example, if a convolutional layer has 64 filters, it will output 64 feature maps.

Canadian scientists have developed an innovative new technique that uses artificial intelligence to better define the different sections of the brain in newborns during a magnetic resonance imaging (MRI) exam. The results of this study--a collaboration between researchers at Montreal's CHU Sainte-Justine children's hospital and the ÉTS engineering school--are published today in Frontiers in Neuroscience. "This is one of the first times that artificial intelligence has been used to better define the different parts of a newborn's brain on an MRI: namely the grey matter, white matter and cerebrospinal fluid," said Dr. Gregory A. Lodygensky, a neonatologist at CHU Sainte-Justine and professor at Université de Montréal. "Until today, the tools available were complex, often intermingled and difficult to access," he added. In collaboration with Professor Jose Dolz, an expert in medical image analysis and machine learning at ÉTS, the researchers were able to adapt the tools to the specificities of the neonatal setting and then validate them. 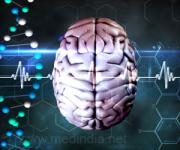 "This is one of the first times that artificial intelligence has been used to better define the different parts of a newborn's brain on an MRI: namely the grey matter, white matter and cerebrospinal fluid," said Dr. Gregory A. Lodygensky, a neonatologist at CHU Sainte-Justine and professor at Universit-- de Montr--al. 'The new technique that uses artificial intelligence allows babies' brains to be examined quickly, accurately and reliably. Scientists see it as a major asset for supporting research that not only addresses brain development in neonatal care, but also the effectiveness of neuroprotective strategies.' "Until today, the tools available were complex, often intermingled and difficult to access," he added. In collaboration with Professor Jose Dolz, an expert in medical image analysis and machine learning at --TS, the researchers were able to adapt the tools to the specificities of the neonatal setting and then validate them. In evaluating a range of tools available in artificial intelligence, CHU Sainte-Justine researchers found that these tools had limitations, particularly with respect to pediatric research.

Image classification in the wild

As we have announced recently, Appsilon Data Science's AI for Good initiative is working together with biodiversity conservationists at the National Parks Agency in Gabon and in collaboration with experts from the University of Stirling. Part of our role in the project is to develop an image classification algorithm capable of classifying wildlife seen in images taken by camera traps located in the forests of Gabon. The project has received support from the Google for Education fund which allowed us to embark on this journey with the immense power of the latest computational resources at hand. Below are some interesting findings we made so far. Stay tuned for more news on the progress!

Face and Image Recognition is not only about security and surveillance or controlling the quality of industrial production processes. The technology is proving increasingly impactful to the fashion and beauty industries, generating multiple exciting opportunities for manufacturers and consumers alike. Face and Image recognition being an AI frontrunner in terms of security, agriculture, and industrial QA, the technology's business uses beyond these three realms are still much less known. As a result, many businesses in industries other than security and surveillance, agriculture, and industrial production have barely given any thought to employing Image Recognition as a means of attaining better capabilities to raise their sights and achieve higher levels of quality and profitability. Meanwhile, the Image Recognition- inspired and - enabled opportunities, which have been cropping up of late elsewhere, can barely be ignored and should be taken note of by a much, much wider audience.

Pleora's AI Gateway supports a wide range of interface protocols. Connect any supported GigE Vision, USB3 Vision, CameraLink or MIPI camera or sensor from any vendor directly to the AI Gateway. Images and data are uploaded to "no code" training software on a host PC, which generates a neural network that is deployed onto the Pleora AI Gateway. Connect to the Pleora AI Gateway and configure the desired AI skills, including plug-in and customized capabilities. The highly configurable platform can be upgraded for complex vision applications requiring more powerful AI image processing capabilities or to address various sensor interfaces.

The usage of deep generative models for image compression has led to impressive performance gains over classical codecs while neural video compression is still in its infancy. Here, we propose an end-to-end, deep generative modeling approach to compress temporal sequences with a focus on video. Our approach builds upon variational autoencoder (VAE) models for sequential data and combines them with recent work on neural image compression. The approach jointly learns to transform the original sequence into a lower-dimensional representation as well as to discretize and entropy code this representation according to predictions of the sequential VAE. Rate-distortion evaluations on small videos from public data sets with varying complexity and diversity show that our model yields competitive results when trained on generic video content.

In vision-and-language grounding problems, fine-grained representations of the image are considered to be of paramount importance. Most of the current systems incorporate visual features and textual concepts as a sketch of an image. However, plainly inferred representations are usually undesirable in that they are composed of separate components, the relations of which are elusive. In this work, we aim at representing an image with a set of integrated visual regions and corresponding textual concepts, reflecting certain semantics. To this end, we build the Mutual Iterative Attention (MIA) module, which integrates correlated visual features and textual concepts, respectively, by aligning the two modalities.

Deep generative models (DGMs) have shown promise in image generation. However, most of the existing methods learn a model by simply optimizing a divergence between the marginal distributions of the model and the data, and often fail to capture rich structures, such as attributes of objects and their relationships, in an image. Human knowledge is a crucial element to the success of DGMs to infer these structures, especially in unsupervised learning. In this paper, we propose amortized structural regularization (ASR), which adopts posterior regularization (PR) to embed human knowledge into DGMs via a set of structural constraints. We derive a lower bound of the regularized log-likelihood in PR and adopt the amortized inference technique to jointly optimize the generative model and an auxiliary recognition model for inference efficiently.