Decade Of Artificial Intelligence: A Summary 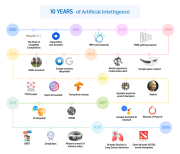 The world has seen a boom in the field of Artificial Intelligence in the past few years. The major reasons contributing to this is the availability of data and computing power. A lot of research has happened in the field of AI in the last decade and society has witnessed many amazing use cases. In the last decade, AI went mainstream because of the availability of hardware, courses, platforms, big companies taking workshops, etc. What our AI community has achieved in the last decade has set a strong foundation for the future.

Yi "Edwin" Sun, a Ph.D. candidate in electrical and computer engineering at the University of Illinois Urbana-Champaign and member of the Beckman Institute's Biophotonics Imaging Laboratory headed by Stephen Boppart, explored how deep learning methods can make polarization-sensitive optical coherence tomography, or PS-OCT, more cost-effective and better equipped to diagnose cancer in biological tissues. The paper, titled "Synthetic polarization-sensitive optical coherence tomography by deep learning," was published in npj Digital Medicine. OCT systems are common clinically and are used to generate high-resolution cross-sectional images of regions in the human body. Sun and his team developed a groundbreaking method of applying software to the OCT tool to provide polarization-sensitive capabilities -- without the cost and complexity that accompany hardware-based PS-OCT imaging systems. "We're trying to replace the hardware associated with PS-OCT," Sun said.

Rue Gilt Groupe is a fashion eCommerce company located in Boston, MA, that has 50M members and daily flash sales on millions of products. Our Data Science team is a tight-knit group of Data Scientists and Machine Learning Engineers who work full-stack on cloud-native architectures to deliver DS and ML services, heavily utilizing Apache Spark and AWS. This post focuses on some recent updates we incorporated into one of our stacks built for big data applications to add support for running the latest and greatest deep learning based algorithms and models. This architecture provides us with the flexibility to pick the right framework at any step of Machine Learning and unlock scalable deep learning pipelines with minimal MLOps code. At the same time, it also provides the flexibility to transition to any MLOps platform without a lot of future ML code changes.

Hack a Neural Network in just 10 Lines of Code!!!

Recently, cognitive computing has been getting a significant amount of traction. It has offered several things to the business world. Since the introduction of IBM Watson, we began to witness the transformations that it can bring to companies. Humans are now studying machine languages to automate tasks by communicating with machines and providing instructions using cognitive computing. There are several tools and applications that are available in the market. This article brings to you the top 10 cognitive computing tools in 2021.

A study of bird songs conducted in the Sierra Nevada mountain range in California generated a million hours of audio, which AI researchers are working to decode to gain insights into how birds responded to wildfires in the region, and to learn which measures helped the birds to rebound more quickly. Scientists can also use the soundscape to help track shifts in migration timing and population ranges, according to a recent account in Scientific American. More audio data is coming in from other research as well, with sound-based projects to count insects and study the effects of light and noise pollution on bird communities underway. "Audio data is a real treasure trove because it contains vast amounts of information," stated ecologist Connor Wood, a Cornell University postdoctoral researcher, who is leading the Sierra Nevada project. "We just need to think creatively about how to share and access that information."

It is still under review and we don't know the real author/authors. Before diving into the architecture of ConvMixer, let us see how the authors got motivated, and how they used the ideas behind existing ideas to make their new model. Convolutional Neural Networks have been dominating the field of computer vision tasks, and now it is the Transformers that are making the buzz. With their very powerful architectural design, transformers have been very successful in the field of NLP, and now they are doing the same thing with vision. The "self-attention" in these vision transformers is quadratic in time O(n²), due to which they work with "patches of images".

Proteins are the building blocks for all living things, providing structure and managing processes in cells. Understanding how these molecules fold into specific 3D shapes is key to understanding their function but requires expensive equipment and lots of time, limiting the progress of research and development. A new artificial intelligence programme called AlphaFold has been shown to accurately predict protein structure in minutes, solving a decades old challenge. Its success is built on the availability of thousands of experimentally determined protein structures, a result of long-term research funding, infrastructure investment and data-sharing policies. DeepMind, the developers of AlphaFold, have made the AlphaFold code and protein structure predictions openly available to the global scientific community.

To develop a proof-of-concept convolutional neural network (CNN) to synthesize T2 maps in right lateral femoral condyle articular cartilage from anatomic MR images by using a conditional generative adversarial network (cGAN). In this retrospective study, anatomic images (from turbo spin-echo and double-echo in steady-state scans) of the right knee of 4621 patients included in the 2004–2006 Osteoarthritis Initiative were used as input to a cGAN-based CNN, and a predicted CNN T2 was generated as output. These patients included men and women of all ethnicities, aged 45–79 years, with or at high risk for knee osteoarthritis incidence or progression who were recruited at four separate centers in the United States. These data were split into 3703 (80%) for training, 462 (10%) for validation, and 456 (10%) for testing. Linear regression analysis was performed between the multiecho spin-echo (MESE) and CNN T2 in the test dataset.

To Be a Machine: Adventures Among Cyborgs, Utopians, Hackers, and the Futurists Solving the Modest Problem of Death (Mark O'Connell). "Flesh is a dead format," writes Mark O'Connell in To Be a Machine, his new nonfiction book about the contemporary transhumanist movement. It's an alarming statement, but don't kill the messenger: As he's eager to explain early in the book, the author is not a transhumanist himself. Instead, he's used To Be a Machine as a vehicle to dive into this loosely knit movement, which he sums up as "a rebellion against human existence as it has been given." In other words, transhumanists believe that technology -- specifically, a direct interface between humans and machines -- is the only way our species can progress from its current, far-than-ideal state.