In computer science, computational learning theory (or just learning theory) is a subfield of Artificial Intelligence devoted to studying the design and analysis of machine learning algorithms (Wikipedia)

The following paper by Gupta and Roughgarden--"Data-Driven Algorithm Design"--addresses the issue that the best algorithm to use for many problems depends on what the input "looks like." Certain algorithms work better for certain types of inputs, whereas other algorithms work better for others. This is especially the case for NP-hard problems, where we do not expect to ever have algorithms that work well on all inputs: instead, we often have various heuristics that each work better in different settings. Moreover, heuristic strategies often have parameters or hyperparameters that must be set in some way. The authors present a theoretical formulation and analysis of algorithm selection using the well-developed framework of PAC-learning to analyze fundamental learning questions. 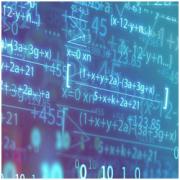 The best algorithm for a computational problem generally depends on the "relevant inputs," a concept that depends on the application domain and often defies formal articulation. Although there is a large literature on empirical approaches to selecting the best algorithm for a given application domain, there has been surprisingly little theoretical analysis of the problem. Our framework captures several state-of-the-art empirical and theoretical approaches to the problem, and our results identify conditions under which these approaches are guaranteed to perform well. We interpret our results in the contexts of learning greedy heuristics, instance feature-based algorithm selection, and parameter tuning in machine learning. Rigorously comparing algorithms is hard. Two different algorithms for a computational problem generally have incomparable performance: one algorithm is better on some inputs but worse on the others. The simplest and most common solution in the theoretical analysis of algorithms is to summarize the performance of an algorithm using a single number, such as its worst-case performance or its average-case performance with respect to an input distribution. This approach effectively advocates using the algorithm with the best summarizing value (e.g., the smallest worst-case running time). Solving a problem "in practice" generally means identifying an algorithm that works well for most or all instances of interest. When the "instances of interest" are easy to specify formally in advance--say, planar graphs, the traditional analysis approaches often give accurate performance predictions and identify useful algorithms.

Given a finite set $X \subset \mathbb{R}^d$ and a binary linear classifier $c: \mathbb{R}^d \to \{0,1\}$, how many queries of the form $c(x)$ are required to learn the label of every point in $X$? Known as \textit{point location}, this problem has inspired over 35 years of research in the pursuit of an optimal algorithm. Building on the prior work of Kane, Lovett, and Moran (ICALP 2018), we provide the first nearly optimal solution, a randomized linear decision tree of depth $\tilde{O}(d\log(|X|))$, improving on the previous best of $\tilde{O}(d^2\log(|X|))$ from Ezra and Sharir (Discrete and Computational Geometry, 2019). As a corollary, we also provide the first nearly optimal algorithm for actively learning halfspaces in the membership query model. En route to these results, we prove a novel characterization of Barthe's Theorem (Inventiones Mathematicae, 1998) of independent interest. In particular, we show that $X$ may be transformed into approximate isotropic position if and only if there exists no $k$-dimensional subspace with more than a $k/d$-fraction of $X$, and provide a similar characterization for exact isotropic position.

I know thou wilt say "ay," And I will take thy word. Yet if thou swear'st Thou mayst prove false. At lovers' perjuries, They say, Jove laughs. 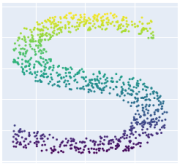 'Curse of dimensionality' is a well-known problem in Data Science, which often causes poor performance, inaccurate results, and, most importantly, a similarity measure break-down. The primary cause of this is because high dimensional datasets are typically sparse, and often a lower-dimensional structure or'Manifold' would embed this data. So there is a non-linear relationship among the variables (or features or dimensions), which we need to learn to compute better similarity. Manifold learning is an approach to non-linear dimensionality reduction. The basis for algorithms in manifold learning is that the dimensionality of many data sets is only artificially high 1.

We study online learning in repeated first-price auctions with censored feedback, where a bidder, only observing the winning bid at the end of each auction, learns to adaptively bid in order to maximize her cumulative payoff. To achieve this goal, the bidder faces a challenging dilemma: if she wins the bid--the only way to achieve positive payoffs--then she is not able to observe the highest bid of the other bidders, which we assume is iid drawn from an unknown distribution. This dilemma, despite being reminiscent of the exploration-exploitation trade-off in contextual bandits, cannot directly be addressed by the existing UCB or Thompson sampling algorithms in that literature, mainly because contrary to the standard bandits setting, when a positive reward is obtained here, nothing about the environment can be learned. In this paper, by exploiting the structural properties of first-price auctions, we develop the first learning algorithm that achieves $O(\sqrt{T}\log^2 T)$ regret bound when the bidder's private values are stochastically generated. We do so by providing an algorithm on a general class of problems, which we call monotone group contextual bandits, where the same regret bound is established under stochastically generated contexts. Further, by a novel lower bound argument, we characterize an $\Omega(T^{2/3})$ lower bound for the case where the contexts are adversarially generated, thus highlighting the impact of the contexts generation mechanism on the fundamental learning limit. Despite this, we further exploit the structure of first-price auctions and develop a learning algorithm that operates sample-efficiently (and computationally efficiently) in the presence of adversarially generated private values. We establish an $O(\sqrt{T}\log^5 T)$ regret bound for this algorithm, hence providing a complete characterization of optimal learning guarantees for this problem.

We consider an NP-hard selective and periodic inventory routing problem (SPIRP) in a waste vegetable oil collection environment. This SPIRP arises in the context of reverse logistics where a biodiesel company has daily requirements of oil to be used as raw material in its production process. These requirements can be fulfilled by using the available inventory, collecting waste vegetable oil or purchasing virgin oil. The problem consists in determining a period (cyclic) planning for the collection and purchasing of oil such that the total collection, inventory and purchasing costs are minimized, while meeting the company's oil requirements and all the operational constraints. We propose a MIP-based heuristic which solves a relaxed model without routing, constructs routes taking into account the relaxation's solution and then improves these routes by solving the capacitated vehicle routing problem associated to each period. Following this approach, an a posteriori performance guarantee is ensured, as the approach provides both a lower bound and a feasible solution. The performed computational experiments show that the MIP-based heuristic is very fast and effective as it is able to encounter near optimal solutions with low gaps within seconds, improving several of the best known results using just a fraction of the time spent by a state-of-the-art heuristic. A remarkable fact is that the proposed MIP-based heuristic improves over the best known results for all the large instances available in the literature.

On the Complexity of Learning from Label Proportions

In the problem of learning with label proportions, which we call LLP learning, the training data is unlabeled, and only the proportions of examples receiving each label are given. The goal is to learn a hypothesis that predicts the proportions of labels on the distribution underlying the sample. This model of learning is applicable to a wide variety of settings, including predicting the number of votes for candidates in political elections from polls. In this paper, we formally define this class and resolve foundational questions regarding the computational complexity of LLP and characterize its relationship to PAC learning. Among our results, we show, perhaps surprisingly, that for finite VC classes what can be efficiently LLP learned is a strict subset of what can be leaned efficiently in PAC, under standard complexity assumptions. We also show that there exist classes of functions whose learnability in LLP is independent of ZFC, the standard set theoretic axioms. This implies that LLP learning cannot be easily characterized (like PAC by VC dimension).