Thucydides And The Dragon: Artificial Intelligence And Sino-US Rivalry

"Made in China" used to mean cheap and poor quality, and probably involving the theft of intellectual property somewhere along the line. That perception has been out of date for many years now. Counterfeiting by Chinese manufacturers is still a major problem in some industries, but the best Chinese companies are world leaders in quality and in innovation. European telecoms utilities are alarmed by Trump's demand that they exclude Huawei components from their 5G rollout programmes: if they comply, their 5G services will be late and expensive. China's two mobile payments giants, Alibaba's Alipay and Tencent's WeChat Pay, both have many more active users than PayPal and Apple Pay combined.

Future of AI Part 5: The Cutting Edge of AI

Edmond de Belamy is a Generative Adversarial Network portrait painting constructed in 2018 by Paris-based arts-collective Obvious and sold for $432,500 in Southebys in October 2018.

In recent years, we have witnessed the success of modern machine learning (ML) models. Many of them have led to unprecedented breakthroughs in a wide range of applications, such as AlphaGo beating a world champion human player or the introduction of autonomous vehicles. There has been continuous effort, both from industry and academia, to extend such advances to solving real-life problems. However, converting a successful ML model into a real-world product is still a nontrivial task. Firstly, modern ML methods are known for being data-hungry and inefficient.

Eight years ago a machine learning algorithm learned to identify a cat--and it stunned the world. A few years later AI could accurately translate languages and take down world champion Go players. Now, machine learning has begun to excel at complex multiplayer video games like Starcraft and Dota 2 and subtle games like poker. AI, it would appear, is improving fast. But how fast is fast, and what's driving the pace?

Kai-Fu Lee has mapped out the challenging artificial intelligence race between America and China in his book AI Superpowers. He has a diversified background working in the field for 35 years. He has interesting viewpoints from holding prominent positions in the US at Google and Apple. Lee is currently CEO/Chairman at Sinovation Ventures in China and held the position of President at Google China. AlphaGo is a deep mind AI computer(super powered machine that runs on power, data and algorithms) acquired by Google in 2014.

Even now, all you have to do is Google search'AI 2017' to find headlines like these: '2017 laid the foundation for faster, smarter AI in 2018' 'All the creepy, crazy and amazing things that happened in AI in 2017' AI took the tech industry by storm. Swarm AI correctly predicted TIME's Person of the Year to be Donald Trump, AI moved into the household through the Amazon Echo and Google Home, and Google's DeepMind AlphaGo Zero conquered the 2,000-year-old board game'Go' through machine learning. If you didn't already know: AlphaGo literally recreated itself without the help of humans, using reinforcement learning to surpass the abilities of world champion Le Sedol and become the best Go player in the world. In 2018, poker bot Libratus was the first to beat 15 top human players, and American technology company Nvidia created AI that could mimic your facial features, handwriting, and voice. They created'celebrities' that don't even exist. Though it didn't impress everyone, with comments like: The iceberg that would later reveal the all-conquering and all-powerful force reckoned to control our entire lives – otherwise known as artificial intelligence.

Artificial Intelligence, or'AI' is the buzzword of the year. What does AI mean to us Independent Workers? Are we going to be replaced by an algorithm? I've been a computer programmer for almost fifty years now and all through my career I was told that a computer was going to replace me. No, it was a computer, I remember.

With more board configurations than there are atoms in the universe, the ancient Chinese game of Go has long been considered a grand challenge for artificial intelligence. On March 9, 2016, the worlds of Go and artificial intelligence collided in South Korea for an extraordinary best-of-five-game competition, coined The DeepMind Challenge Match. Hundreds of millions of people around the world watched as a legendary Go master took on an unproven AI challenger for the first time in history. Directed by Greg Kohs with an original score by Academy Award nominee, Hauschka, AlphaGo chronicles a journey from the halls of Oxford, through the backstreets of Bordeaux, past the coding terminals of DeepMind in London, and ultimately, to the seven-day tournament in Seoul. As the drama unfolds, more questions emerge: What can artificial intelligence reveal about a 3000-year-old game? 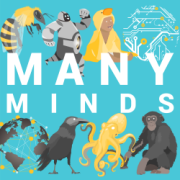 Our guest today is Marta Halina, a University Lecturer (Assistant Professor) in the Department of History and Philosophy of Science at the University of Cambridge. Marta's current focus is the philosophy of artificial intelligence. We discuss what philosophers can contribute to AI. We talk about AlphaGo and its stunning defeat of one of the world's most celebrated Go champions. We puzzle over whether artificial minds can think creatively.

Regardless of what is happening around the world, the AI community are one productive bunch, and they have something interesting to share almost every day. Here's what is new this week: The short history of deep learning indicates the incredible effectiveness of infinitely wide networks. Insights from these infinitely wide networks can be used as a lens to study deep learning. However, implementing infinite-width models in an efficient and scalable way requires significant engineering proficiency. To address these challenges and accelerate theoretical progress in deep learning, Google's AI team released Neural Tangents, a new open-source software library written in JAX.