Japan to use AI for customs procedures, stop drug smuggling 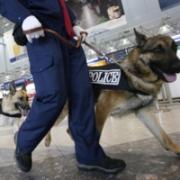 Japan's Finance Ministry is promoting a program to introduce artificial intelligence and other cutting-edge technology to help customs agents crack down on increased smuggling of illegal drugs. The program aims to establish the world's most advanced inspection capabilities according to a plan announced by the ministry in June last year. As part of the program, AI-based analysis will be used to sort through huge amounts of data on past cases of unlawful import activity, looking for patterns of false descriptions on such matters as price, quantity and weight of goods on import declarations. The information will help pin down importers who should be watched more closely. To prevent the importing of illegal drugs, the ministry has already started testing a prototype nuclear quadrupole resonance (NQR) device that uses AI to check X-rayed items and identify possible drug smuggling.

A New Jersey man is suing local authorities who he says wrongly arrested him based on a false facial-recognition match, in a case that risks further inflaming debate over the utility and accuracy of the fast-emerging technology. The man, 33-year-old Nijeer Parks, spent more than a week in jail after police detained him in February 2019 on charges of shoplifting, assault and drug possession related to a Jan. 26 incident that year at a Hampton Inn hotel in Woodbridge, N.J., according to a complaint filed in New Jersey Superior Court. The criminal case was dismissed in November 2019, according to a court official in Middlesex County, where Woodbridge is located. Mr. Parks is now seeking unspecified damages, according to the complaint, over allegations including false arrest, civil-rights violations and emotional distress. The New Jersey state police, Woodbridge police and prosecutors in Middlesex County didn't immediately respond to requests for comment.

Some UK Stores Are Using Facial Recognition to Track Shoppers

Branches of Co-op in the south of England have been using real-time facial recognition cameras to scan shoppers entering stores. This story originally appeared on WIRED UK. In total 18 shops from the Southern Co-op franchise have been using the technology in an effort to reduce shoplifting and abuse against staff. As a result of the trials, other regional Co-Op franchises are now believed to be trialing facial recognition systems. Use of facial recognition by police forces has been controversial, with the Court of Appeal ruling parts of its use to be unlawful earlier this year.

Branches of Co-op in the south of England have been using real-time facial recognition cameras to scan shoppers entering stores. In total 18 shops from the Southern Co-op franchise have been using the technology in an effort to reduce shoplifting and abuse against staff. As a result of the trials, other regional Co-op franchises are now believed to be trialling facial recognition systems. Use of facial recognition by police forces has been controversial with the Court of Appeal ruling parts of its use to be unlawful earlier this year. But its use has been creeping into the private sector, but the true scale of its use remains unknown.

How our data encodes systematic racism

I've often been told, "The data does not lie." However, that has never been my experience. Google Image search results for "healthy skin" show only light-skinned women, and a query on "Black girls" still returns pornography. The CelebA face data set has labels of "big nose" and "big lips" that are disproportionately assigned to darker-skinned female faces like mine. ImageNet-trained models label me a "bad person," a "drug addict," or a "failure."

Governments are increasingly turning to algorithmic risk assessments when making important decisions, believing that these algorithms will improve public servants' ability to make policy-relevant predictions and thereby lead to more informed decisions. Yet because many policy decisions require balancing risk-minimization with competing social goals, evaluating the impacts of risk assessments requires considering how public servants are influenced by risk assessments when making policy decisions rather than just how accurately these algorithms make predictions. Through an online experiment with 2,140 lay participants simulating two high-stakes government contexts, we provide the first large-scale evidence that risk assessments can systematically alter decision-making processes by increasing the salience of risk as a factor in decisions and that these shifts could exacerbate racial disparities. These results demonstrate that improving human prediction accuracy with algorithms does not necessarily improve human decisions and highlight the need to experimentally test how government algorithms are used by human decision-makers.

Maybe Olivia Jade Giannulli had hoped for kid-glove treatment in choosing the family vibe of "Red Table Talk" for her first public comments about the college admissions scandal involving her famous parents. If so, she was quickly enlightened during Tuesday's episode of the Facebook Watch series. "What were some of the repercussions throughout this whole situation?" "Because you're a beautiful young white woman who's been born into privilege, and there would be some people that would feel like, she'll be fine. Giannulli, 21, who admitted to nerves but said she considered the show a safe and open space, denied that she was seeking sympathy. Her parents, "Full House" actor Lori Loughlin and fashion designer Mossimo Giannulli, are behind bars after pleading guilty to paying a half-million dollars to get Olivia Jade and sister Isabella, 22, into the University of Southern California as crew recruits, though neither were rowers. I don't deserve pity," Giannulli replied to Norris.

Tinder parent company Match Group is partnering with one of the largest anti-sexual violence groups in the US to audit how it handles reports of sexual assault across its many dating platforms. The Rape, Abuse & Incest National Network (RAINN) will "conduct a comprehensive review of sexual misconduct reporting, moderation and response across Match Group's dating platforms and to work together to improve current safety systems and tools," the company said on Monday. The first phase of the review will focus on Tinder, Hinge and Plenty of Fish before moving on to Match's other platforms -- the company owns around 40 other dating brands altogether. The partnership, which Axios was the first to report on, will continue through 2021, with recommend changes rolling out "shortly thereafter." This is an important move for Match, even if there aren't many details at the moment. While you frequently hear of horror stories, it's difficult to put an exact number to the incidents of sexual assault that happen through Tinder and other online dating platforms.

Human cognition and instinct are about to become significantly more widespread in machines, as it promises to rapidly surpass simple AI. Artificial Intelligence has evolved unrecognizably since its inception in the 1950s, and it is displaying no signs of slowing down. Previous generations have been just the tip of the iceberg. Artificial intuition marks the factor when AI will definitely grow to be more intelligent than it is now. Even though the third generation of predictive analytics has many advantages, it is still entirely dependent on historic data.