A breakthrough that led to the creation of new neurons in mice could be used to transplant brain cells in Parkinson's patients and cure them of the disease. University of California San Diego School of Medicine researchers created neurons in mice using a new, much simpler method that involved rewriting genes. Parkinson's disease is characterised by a loss of dopaminergic neurons in a region of the brain responsible for reward and movement - replacing those cells could help to reduce or even reverse the symptoms of the degenerative disease. A small study involving mice with Parkinson's saw those given the'new neuron treatment' return to normal within three months and stay disease free for life. The researchers said it could one day be used to'cure' any disease caused by the loss of neurons but warned this was a long way off and hadn't been tested. Left: mouse cells (green) before reprogramming and then right shows neurons (red) induced from mouse cells after reprogramming. 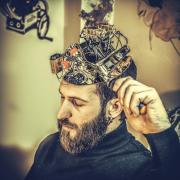 When considering neuroprosthetics and brain-machine interfaces, cyborgs and sentient robots may come to mind – part of a not too distant dystopian future, perhaps. Popular culture leans very heavily upon speculation and the boundless imagination of readers and writers alike, often arousing apprehension and calls to forego innovation for fear of what we may unwittingly create. The question often arises of whether it is'right' to incorporate machines so closely into our bodies and minds. However, it is not necessarily a question of'right' or'wrong' but rather, and possibly more importantly, 'why'. Far removed from the imagined dystopia, neuroprosthetics are simply devices used to either replace or supplement inputs and outputs to the nervous system.

Digital health company Medopad today announced that it's rebranding to Huma and acquiring two companies -- BioBeats and Tarilian Laser Technologies (TLT) -- to add support for new biomarkers to its AI-powered patient monitoring platform. When contacted for comment, a Huma spokesperson declined to disclose the purchase price for the two companies. The acquisitions would appear to be strategic -- increasingly, health systems and hospitals are employing AI-enabled telemedical services to triage and treat patients potentially infected with COVID-19. Huma previously leveraged AI to identify signs of chronic diseases like Parkinson's disease, in partnership with Tencent, but the incorporation of BioBeats' and TLT's technologies will enable it to analyze mental and cardiovascular health data. Through its mobile app BioBase, BioBeats offers an eight-week psychological wellness course comprising coaching topics, exercises, audio sessions, and surveys surfaced by an AI recommender system.

In precision medicine, machine learning techniques have been commonly proposed to aid physicians in early screening of chronic diseases. Many of these diseases become more difficult to treat as they progress, so accurate early screening is critical to ensure resources are directed towards the most effective treatment plan [Pagan, 2012]. Since the final treatment decision must inevitably be made by a doctor, these screening procedures should be interpretable such that a clinician can explain the decision-making process to patients for informed consent. However, the types of models that achieve the highest level of accuracy given early screening data tend to be extremely complex, meaning that even machine learning experts have difficulties explaining why certain predictions are made, leading many to describe them as "black box" [Breiman, 2001]. In this paper, we bridge this gap by providing a novel approach for explaining black box model predictions which can give high fidelity explanations with lower model complexity. In particular we will focus on early screening of Parkinson's Disease (PD). PD is a complicated neurodegenerative disorder that affects the central nervous system and specifically the motor control of individuals [mjf, 2019]. This disorder is estimated to affect 930,000 individuals in the US by 2020, and is more prevalent in the geriatric population affecting more then 1% of the population over the age of 60 and 5% of the population over age 85 [Findley, 2007, Kowal et al., 2013, Rossi et al., 2018]. These statistics and other recent studies on Parkinson's epidemiology indicate that as the population ages, the prevalence of PD is expected to grow to over 1.2 million by 2030 in the US alone, increasing the total economic burden of the disorder to approximately $26 billion USD [Kowal et al., 2013, Rossi et al., 2018].

BROOKLYN, New York, Wednesday, March 4, 2020 - Robots hold promise for a large number of people with neurological movement disorders severely affecting the quality of their lives. Now researchers have tapped artificial intelligence techniques to build an algorithmic model that will make the robots more accurate, faster, and safer when battling hand tremors. Their model, which is ready for others to deploy, appears this month in Scientific Reports, an online journal of Nature. The international team reports the most robust techniques to date to characterize pathological hand tremors symptomatic of the common and debilitating motor problems affecting a large number of aging adults. One million people throughout the world have been diagnosed with Parkinson's disease, just one of the neurodegenerative diseases that can cause hand tremors.

Malfunctioning neurons in the brain sometimes operate synchronously, reportedly causing many neurological diseases, e.g. Parkinson's. Suppression and control of this collective synchronous activity are therefore of great importance for neuroscience, and can only rely on limited engineering trials due to the need to experiment with live human brains. We present the first Reinforcement Learning gym framework that emulates this collective behavior of neurons and allows us to find suppression parameters for the environment of synthetic degenerate models of neurons. We successfully suppress synchrony via RL for three pathological signaling regimes, characterize the framework's stability to noise, and further remove the unwanted oscillations by engaging multiple PPO agents.

Regression is an important task in machine learning and data mining. It has several applications in various domains, including finance, biomedical, and computer vision. Recently, network Lasso, which estimates local models by making clusters using the network information, was proposed and its superior performance was demonstrated. In this study, we propose a simple yet effective local model training algorithm called the fast anchor regularized local linear method (FALL). More specifically, we train a local model for each sample by regularizing it with precomputed anchor models. The key advantage of the proposed algorithm is that we can obtain a closed-form solution with only matrix multiplication; additionally, the proposed algorithm is easily interpretable, fast to compute and parallelizable. Through experiments on synthetic and real-world datasets, we demonstrate that FALL compares favorably in terms of accuracy with the state-of-the-art network Lasso algorithm with significantly smaller training time (two orders of magnitude).

Comparison of user models based on GMM-UBM and i-vectors for speech, handwriting, and gait assessment of Parkinson's disease patients

Analysis and Evaluation of Handwriting in Patients with Parkinson's Disease Using kinematic, Geometrical, and Non-linear Features

Background and objectives: Parkinson's disease is a neurological disorder that affects the motor system producing lack of coordination, resting tremor, and rigidity. Impairments in handwriting are among the main symptoms of the disease. Handwriting analysis can help in supporting the diagnosis and in monitoring the progress of the disease. This paper aims to evaluate the importance of different groups of features to model handwriting deficits that appear due to Parkinson's disease; and how those features are able to discriminate between Parkinson's disease patients and healthy subjects. Methods: Features based on kinematic, geometrical and non-linear dynamics analyses were evaluated to classify Parkinson's disease and healthy subjects. Classifiers based on K-nearest neighbors, support vector machines, and random forest were considered. Results: Accuracies of up to $93.1\%$ were obtained in the classification of patients and healthy control subjects. A relevance analysis of the features indicated that those related to speed, acceleration, and pressure are the most discriminant. The automatic classification of patients in different stages of the disease shows $\kappa$ indexes between $0.36$ and $0.44$. Accuracies of up to $83.3\%$ were obtained in a different dataset used only for validation purposes. Conclusions: The results confirmed the negative impact of aging in the classification process when we considered different groups of healthy subjects. In addition, the results reported with the separate validation set comprise a step towards the development of automated tools to support the diagnosis process in clinical practice.