As long as this world is moving ahead, the visualization of AI is turning out into a reality at quite a relentless pace. At present, the election candidates are all humans and there is absolutely no involvement of AI in any elections of the world. But, to turn the tables around, New Zealand is all set to launch their first AI politician-Sam in the upcoming elections of 2020.

Bringing Anzac Heroes to Life with AI Chatbots on Facebook 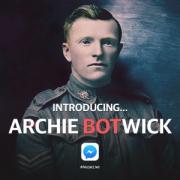 Curious to know what an Australian soldier fighting in WWI had for brekkie? Now you can ask him yourself, along with anything else that comes to mind. The Wizeline bots team has partnered News Corp Australia to launch the AnzacLive chatbot, an innovative way to share history with a modern audience. The chatbot was created to commemorate Anzac Day, which recognizes the anniversary of the first major military action fought by the Australian and New Zealand Army Corps. in WWI -- namely the historic battles of Fromelles and Pozieres in July 1916. How did our bots team create a cross-century AMA? Journals from one of the soldiers, Archie Barwick, have been powered by technology.