You don't need to understand AI to trust it, says German politician

The minister for artificial intelligence at the German government has spoken about the European vision for AI, especially how to grow and gain trust from non-expert users. Prof. Dr. Ina Schieferdecker, a junior minister in Germany's Federal Ministry of Education and Research (Bundesministerium für Bildung und Forschung, BMBF), who has artificial intelligence in her portfolio, recently attended an AI Camp in Berlin (or KI-Camp in German, for "künstliche Intelligenz"). She was interviewed there by DW (Deutsche Welle, Germany's answer to the BBC World Service) on how the German government and the European Union can help alleviate concerns about AI among ordinary users of the internet and information technologies. When addressing the question that AI is often seen as a "black box", and the demand for algorithms to be made transparent, Schieferdecker said she saw it differently. "I don't believe that everyone has to understand AI. Not everyone can understand it," she said.

Today, Mozilla and the German Ministry for Economic Cooperation and Development (BMZ) have announced to join forces in the collection of open speech data in local languages, as well as the development of local innovation ecosystems for voice-enabled products and technologies. The initiative builds on the pilot project, which our Open Innovation team and the Machine Learning Group started together with the organization "Digital Umuganda" earlier this year. The Rwandan start-up collects language data in Kinyarwanda, an African language spoken by over 12 million people. Further languages in Africa and Asia are going to be added. Mozilla's projects Common Voice and Deep Speech will be the heart of the joint initiative, which aims at collecting diverse voice data and opening up a common, public database.

In October a German group published its position on ethics and AI. With the new European Commission tipped to put forward a comprehensive AI policy in the first 100 days of office, a lot of scrutiny has been given to the proposals. German consumer rights organisation, vzbv, CEO, Klaus Müller explained: "We expect this report – which was drafted by experts for the German Ministries of the interior and justice/consumers – to influence the plans of the European Commission. At the presentation of the report people already said that its findings should now become part of the EU-level debate." There are several reasons to take the report seriously.

Measures to boost trade and investment and cooperation in new areas such as artificial intelligence are expected to be on the agenda during German Chancellor Angela Merkel's meeting with Prime Minister Narendra Modi in New Delhi on November 1. Merkel will arrive in India on October 31 for the day-long visit at Modi's invitation. She will be accompanied by several ministers and state secretaries of the German government and a high-level business delegation. The two Leaders will also have a separate engagement with CEOs and business leaders of both sides. As part of the inter-governmental consultations, Indian ministers and their German counterparts will hold initial discussions in their respective areas, and the outcome of these talks will be reported on at the meet co-chaired by Modi and Merkel. During the consultations, the two sides will discuss ways to deepen cooperation in traditional sectors such as transport, skill development and energy, and explore possibilities for working together in new areas such as artificial intelligence and green urban mobility, the external affairs ministry said on Friday.

Angela Merkel travels in a robo taxi at IAA 2019

At the ongoing the In ter na tional Motor Show (IAA) in Frankfurt, technology company Continental, together with the French company EasyMile, of which Continental has been a shareholder since 2017, are demonstrating the mobility of the future -- quite literally. Trade fair visitors can commute autonomously and powered only by electricity between two stops. The two companies have set up a demonstration track for a driverless Robo-Taxi between Hall 9 and the IAA Test Drive on the West Outdoor Area.German Chancellor Angela Merkel was one of the visitors to the fair who took a ride in the Cube robo taxi. The Robo-Taxi Cube is a Continental development platform for driverless vehicles technologies based on the EZ10 shuttle and driverless software from EasyMile. The shuttle service runs on all days of the fair during opening hours.

FRANKFURT (Reuters) - Waymo is exploring deploying its self-driving technology in the trucking industry, CEO John Krafcik said on Thursday, as it works with industry partners to seize a commercial opportunity from a looming shortage of human drivers. Waymo, backed by Alphabet Inc's (GOOGL.O) Google, has so far focused on so-called robotaxis but, in remarks prepared for a speech to the Frankfurt motor show, Krafcik said the self-driving technology, Waymo Driver, was also suited to steering road freight. "Ride-hailing is an important application of our Driver," Krafcik told political and industry leaders, including German Chancellor Angela Merkel, at the event's official opening. "Our technology can also make trucking safer and stronger, and fill a pressing need for more drivers in many parts of the world. "We've already conducted road tests of the Waymo Driver in Class 8 trucks across the U.S., and we're working closely with the ecosystem -- shippers, truck makers, and Tier One suppliers -- to ensure a successful deployment." Industry experts and analysts forecast a severe shortage of truck drivers in aging societies, including Germany, leading mobility players including Uber (UBER.N) to develop applications that aim to boost the sector's efficiency. Ten-year-old Waymo is widely viewed as the leader of the self-driving race, but attaining the holy grail of full and safe automation remains challenging as companies in the field seek to recoup their research and development costs. "Our journey has been a long one, but there is still a long road ahead.

German Government Cybersecurity Chief: 'The Only Thing That Can Help Is Preventative Action'

DER SPIEGEL: Mr. Schönbohm, the German government has decided not to exclude Huawei from building networks for the next generation of mobile communications. Do you not see any risk in allowing this controversial Chinese company from participating in the construction of the 5G network in Germany? Schönbohm: I think the risk is manageable. There are essentially two fears: First, espionage -- i.e. that data will be siphoned off involuntarily. But we can counter that with improved encryption. 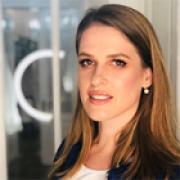 Ursula von der Leyen was elected on Tuesday as the new President of the European Commission by 383 Members of the new European Parliament. She is the first woman to hold the office. A centre-right politician and close ally of German Chancellor Angela Merkel, she was until this week Germany's defense minister. So what does her election mean for EU tech policy over the next five years? We did get a glimpse of her priorities in her Tuesday morning speech addressing the plenary of the European Parliament ahead of her confirmation vote. 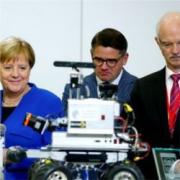 German Chancellor Angela Merkel, Hesse's Science Minister Boris Rhein and President of Darmstadt University of Technology (TU Darmstadt) Hans Jurgen Promel attend a demonstration of a rescue robot at the university in Darmstadt, Germany, October 8, 2018. Germany plans to invest more than 3 billion euros ($3.39 million) by 2025 to beef up its artificial intelligence capabilities and appoint 100 professors to lecture about it, as it seeks to close a digital technology gap with other leading economies.