Existing computational methods for the analysis of corpora of text in natural language are still far from approaching a human level of understanding. We attempt to advance the state of the art by introducing a model and algorithmic framework to transform text into recursively structured data. We apply this to the analysis of news titles extracted from a social news aggregation website. We show that a recursive ordered hypergraph is a sufficiently generic structure to represent significant number of fundamental natural language constructs, with advantages over conventional approaches such as semantic graphs. We present a pipeline of transformations from the output of conventional NLP algorithms to such hypergraphs, which we denote as semantic hypergraphs. The features of these transformations include the creation of new concepts from existing ones, the organisation of statements into regular structures of predicates followed by an arbitrary number of entities and the ability to represent statements about other statements. We demonstrate knowledge inference from the hypergraph, identifying claims and expressions of conflicts, along with their participating actors and topics. We show how this enables the actor-centric summarization of conflicts, comparison of topics of claims between actors and networks of conflicts between actors in the context of a given topic. On the whole, we propose a hypergraphic knowledge representation model that can be used to provide effective overviews of a large corpus of text in natural language.

The Israeli military says it's uncovered a plot by Hamas to spy on soldiers by befriending them on social media and then luring them to download dating applications that give the militants access to their smartphones. 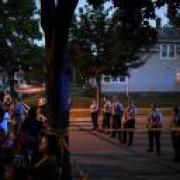 AMMAN – Prince William on Sunday praised "historic ties and friendship" between Britain and Jordan, as he kicked off a historic, politically delicate five-day tour of the desert kingdom, Israel and the Palestinian territories. Though billed as nonpolitical, it's a high-profile foreign visit for William, 36, second in line to the throne. He is meeting with young scientists, refugees and political leaders in a tumultuous region Britain controlled between the two world wars. On Sunday, he was welcomed in Jordan by 23-year-old Crown Prince Hussein, a member of the Hashemite dynasty Britain helped install in then-Transjordan almost a century ago. William was greeted by an honor guard after his plane landed at a small airport on the outskirts of the capital of Amman.

Britain's Prince William on Sunday praised "historic ties and friendship" with Jordan and the kingdom's commitment to Syrian and Palestinian refugees, as he began a historic five-day tour that also includes Israel and the Palestinian territories. Though billed as non-political, it's a high-profile visit for William, 36, second in line to the throne. He is meeting with young scientists, refugees and political leaders in a tumultuous region Britain controlled between the two world wars. In Jordan, the prince was hosted by Crown Prince Hussein, 23, a member of the Hashemite dynasty Britain helped install in then-Transjordan almost a century ago. The pair capped the day Sunday by watching England's World Cup match against Panama which the heir to the Jordanian throne had recorded earlier, Press Association said.

Palestinian health officials said 15 Palestinians were killed by Israeli fire and more than 750 hit by live rounds Friday, making it the bloodiest day in Gaza since the 2014 cross-border war between Israel and Hamas. In Friday's confrontations, large crowds gathered near the fence, with smaller groups of protesters rushing forward, throwing stones and burning tires. Israeli troops responded with live fire and rubber-coated steel pellets, while drones dropped tear gas from above. Gen. Ronen Manelis, said that while thousands of Palestinians approached the border Friday, those engaged in stone-throwing were in the hundreds. General Manelis denied soldiers used excessive force, saying those killed by Israeli troops were men between the ages of 18 and 30 who were involved in violence and belonged to militant factions.

Hamas has blamed the Israeli national intelligence agency Mossad for the assassination of one of its Tunisian members after conducting an 11-month-long investigation.

Its founder knows his demographic well: residents of the religiously conservative Gaza Strip, with its culture of resistance. Some 1,400 men have been killed in the three wars with Israel since 2008, leaving many widows who would like to remarry. Tradition, however, can make it difficult for them to wed single men. Mr. Abu Mustafa, 34, a math teacher, said he had no specific reasons to get married again, but said he did wish to give "dignity" to a widow. Ms. Abu Mustafa's first husband died during the conflict between Hamas and Israel in 2012.

Hamas claims it has both surveillance and attack drones. During the 2014 Gaza-Israel conflict, Hamas released aerial footage of parts of Israel.

WASHINGTON – Insurgent groups like Hezbollah and the Islamic State group have learned how to weaponize surveillance drones and use them against each other, adding a new twist to Syria's civil war, a U.S. military official and others say. A video belonging to an AL Qaeda offshoot, Jund al-Aqsa, purportedly shows a drone landing on Syrian military barracks. In another video, small explosives purportedly dropped by the Iran-backed Shiite militant group Hezbollah target the Sunni militant group Jabhat Fatah al-Sham, formerly known as the Nusra Front. A U.S. military official, who spoke anonymously because he wasn't authorized to discuss the matter publicly, said the U.S. military is aware of the development. Commanders have warned troops to take cover if they see what they might have once dismissed as a surveillance drone, he said.