My Gartner colleagues Farhan Choudhary Jeremy D'Hoinne and I just launched coverage of the AI Trust Risk & Security Management (TriSM) market. AI TriSM comprises multiple software segments that ensure AI model; governance, trustworthiness, fairness, reliability, efficacy, security and data protection. As users start operationalizing their AI models, their attention quickly turns to managing model risk and ensuring their AI can be trusted to perform as designed. In fact, our last Gartner enterprise AI survey found that'security or privacy concerns' are the number 1 barrier to AI model implementation so it's no wonder that's where user attention turns once models are put into production. Today the AI TriSM market is fragmented, and users must select solutions from multiple categories to manage many inherent risks and issues.

Deep learning is on the frontline in a new age of piracy, outwitting attacks with pre-emptive tech, explains Yarden Gross, CEO and co-founder of Orca AI. Almost a decade has passed since piracy raged off Somalia, and yet the danger posed by maritime hijackings is as present as ever. The global pandemic last year sparked a resurgence of attacks, with piracy incidents doubling across Asia, in a worrying uptick also seen in the Gulf of Mexico and West Africa. The fallout from coronavirus, including the loss of key security personnel, turned quarantined vessels into easy targets. This wave has since receded a little, with the International Maritime Bureau reporting a 44 per cent YoY dip in piracy and armed robbery incidents in 2021. 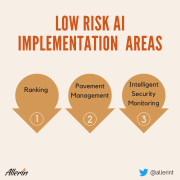 Certain systems powered by AI in smart cities may be expensive to incorporate or may need to comply with several regulations before implementation, making them'high-risk' AI applications. Using such risk criteria, here are some of the low-risk AI application areas for smart cities. Smart cities around the world are littered with advanced and interconnected technologies. The high level of automation and data flow allows such cities to optimize various public operations such as waste disposal and traffic regulation effectively. While the concept is still fairly new, several countries, like the US (New York, Santa Cruz), England (London, Manchester), and Spain (Madrid, Barcelona), include multiple highly automated and digitally interconnected cities today. Additionally, the smart city industry is expected to grow rapidly in the coming years due to its popularity and effectiveness in delivering the results expected from it.

An outdoor camera is great because if someone's on your porch you can talk to them and they can talk to you. This contact-free communication is also of great importance for safety. Arenti, whose mission is to make your life easier, safer and smarter. The all-new Arenti GO1 is an outdoor camera that builds upon the features of 100% wireless & 6700mAh battery with 1080P full HD&IP65 water resistance, providing homeowners more insight into what's happening around their home. "One year ago, we reinvented the ordinary outdoor camera with our original Arenti outdoor camera, and now we're bringing more cutting-edge features to this device with Arenti GO1," said Silas Lou, Arenti's Product Manager.

Surveillance cameras are deployed extensively across the country, and the UK's code of practice is designed to ensure that they are always used for the right reasons, and without impacting citizens' privacy. The UK government has updated the rules surrounding the use of surveillance cameras by local authorities and the police, in an effort to address some of the concerns raised in recent years -- particularly about facial recognition technology. The new Surveillance Camera Code of Practice is an improved version of the code that was published in 2013, and is the first time the document has been amended in eight years. The code provides guidance on the use of camera systems that record or view images for surveillance purposes. CCTV cameras, for example, are included, along with automatic number plate recognition (ANPR) technologies, and any system that's used to store or process the information obtained by those devices. 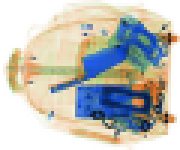 In my previous post, I wrote about my journey from a mechanical engineering graduate to becoming a masters student in machine learning at University of Toronto. In this post, I would like to share my process of getting started with my deep learning/computer vision research project in academic research setting. He later added that the image data would be Xray scans of baggages at airport security. The trained deep learning model would be identifying baggages that contain dangerous items, a task usually performed by security personnels at the airport. The professor shared with me a dataset folder containing the Xray baggage images.

Copy and Paste method based on Pose for Re-identification

The aim of re-identification is to match objects in surveillance cameras with different viewpoints. Although ReID is developing at a considerably rapid pace, there is currently no processing method for the ReID task in multiple scenarios. However, such processing method is required in real life scenarios, such as those involving security. In the present study, a new ReID scenario was explored, which differs in terms of perspective, background, and pose(walking or cycling). Obviously, ordinary ReID processing methods cannot effectively handle such a scenario, with the introduction of image datasets being the optimal solution, in addition to being considerably expensive. To solve the aforementioned problem, a simple and effective method to generate images in several new scenarios was proposed, which is names the Copy and Paste method based on Pose(CPP). The CPP method is based on key point detection, using copy as paste, to composite a new semantic image dataset in two different semantic image datasets. As an example, pedestrains and bicycles can be used to generate several images that show the same person riding on different bicycles. The CPP method is suitable for ReID tasks in new scenarios and outperforms the traditional methods when applied to the original datasets in original ReID tasks. To be specific, the CPP method can also perform better in terms of generalization for third-party public dataset. The Code and datasets composited by the CPP method will be available in the future.

JA: Would you agree that there are tens of millions of CCTV cameras around the world delivering practically no return on investment? RF: Certainly, I'm not sure you can go as far as to say they have no return on investment but certainly they aren't being utilised to their fullest. By complementing the initial surveillance system investment with comprehensive video analytics, you transform the massive amounts of video data that normally goes untouched, into valuable insights for safety, security and operational efficiency. JA: Is it fair to say that these cameras have considerable potential when it comes to automating searches, reporting events? The better we can extract and manage events and data from cameras the more we can start to have great effect on not only the traditional safety and security applications but also expand to operational decision making, customer experience and the overall optimization of a physical space.

Intelligent resident surveillance is one of the most essential smart community services. The increasing demand for security needs surveillance systems to be able to detect anomalies in surveillance scenes. Employing high-capacity computational devices for intelligent surveillance in residential societies is costly and not feasible. Therefore, we propose anomaly detection for intelligent surveillance using CPU-only edge devices. A modular framework to capture object-level inferences and tracking is developed. To cope with partial occlusions, posture deformations, and complex scenes, we employed feature encoding and trajectory association governed by two metrices complementing to each other. The elements of an anomaly detection framework are optimized to run on CPU-only edge devices with sufficient frames per second (FPS). The experimental results indicate the proposed method is feasible and achieves satisfactory results in real-life scenarios.

What is physical security? How to keep your facilities and devices safe from on-site attackers

Physical security is the protection of people, property, and physical assets from actions and events that could cause damage or loss. Though often overlooked in favor of cybersecurity, physical security is equally important. And, indeed, it has grown into a $30 billion industry. All the firewalls in the world can't help you if an attacker removes your storage media from the storage room. The growing sophistication of physical security through technologies such as artificial intelligence (AI) and the internet of things (IoT) means IT and physical security are becoming more closely connected, and as a result security teams need to be working together to secure both the physical and digital assets.