AI Is Critical To Our Country's Future - Strategic Search

AI or artificial intelligence use and applications are growing at an accelerated rate! Competitors like Russia and China will soon pass us in artificial intelligence proficiency if we do not continue to advance. For example, Russia has made weaponizing AI for military purposes a priority! Artificial intelligence investments have been boosted by the need for enterprise digital transformation during the pandemic. Last year, AI startups raised a collective $73.4 billion in Q4 2020, a $15 billion year-over-year increase.

Titled "Investing in trustworthy AI," the 82-page report from Deloitte and the Chamber Technology Engagement Center sought to identify the concerns that technology experts have when it comes to the adoption of AI, as well as highlight the impact that government investment in AI can have on the emerging technology. For instance, the survey found that 66% of respondents indicated that "the government could mitigate unwanted biases" and found 69% suggested that "the government could encourage accountability for AI decisions." Two-thirds of survey-takers want the government to reduce the impact of job loss due to AI, while 72% said the government could "mitigate acceleration of social divides between workers with and without AI skills." "Broadly, respondents overwhelmingly supported the notion that government intervention could enhance the benefits of AI and thus contribute to increased AI trustworthiness," the report states. One-quarter of patents granted by the United States Patent and Trademark Office use AI technologies in some shape or form, reports Deloitte, which claims that the economic impact of AI will be somewhere between $447 billion and $1.43 trillion over the next five years.

Deadline 2024: Why you only have 3 years left to adopt AI

All the sessions from Transform 2021 are available on-demand now. If your company has yet to embrace AI, you're in a race against the clock. And by my calculations, you have just three years left. How did I arrive at 2024 as the deadline for AI adoption? My prediction -- formulated with KUNGFU.AI advisor Paco Nathan -- is rooted in us noticing that many futurists' J curves show innovations typically have a 12-to-15-year window of opportunity, a period between when a technology emerges and when it reaches the point of widespread adoption.

In this article, I will help you use machine learning alongside your calculator or questionnaire to learn more about your users. After reading, you will know everything you need to fill in the blanks of optional questions with educated guesses as to what users might have responded. I used Python Pandas to do so, but all concepts should carry over to any language you're using. Thus, continue reading if you check the following boxes. You want to improve the accuracy of your calculator or quiz's results Great -- lets dive in!

Bias in AI isn't an enterprise priority, but it should be, survey warns

All the sessions from Transform 2021 are available on-demand now. A global survey published today finds nearly a third (31%) of respondents consider the social impact of bias in models to be AI's biggest challenge. This is followed by concerns about the impact AI is likely to have on data privacy (21%). More troubling, only 10% of respondents said their organization has addressed bias in AI, with another 30% planning to do so sometime in the next 12 months. Conducted by Anaconda, whose platform provides access to curated instances of open source tools for building AI models, the survey of 4,299 individuals includes IT and business professionals, alongside students and academics.

What AI Experts Fear from AI 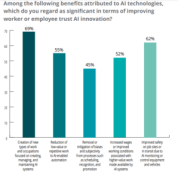 These are some of the outcomes that AI developers fear will come from their work, according to a new report issued today by the Deloitte AI Institute and the U.S. Chamber of Commerce. Titled "Investing in trustworthy AI," the 82-page report from Deloitte and the Chamber Technology Engagement Center sought to identify the concerns that technology experts have when it comes to the adoption of AI, as well as highlight the impact that government investment in AI can have on the emerging technology. Algorithmic bias and a lack of humans in decision loops are concerns for about two-thirds of the 250 people who participated in the survey. Another 60% identified "rogue or unanticipated behavior" of autonomous agents as a threat, while 56% said the lack of explainability of algorithms was a concern. "Perceived, and actual, discrimination by AI systems undermines the confidence individuals have in whether they are being given a fair opportunity when AI is involved," the report stated.

All the sessions from Transform 2021 are available on-demand now. The need for enterprise digital transformation during the pandemic has bolstered investments in AI. Last year, AI startups raised a collective $73.4 billion in Q4 2020, a $15 billion year-over-year increase. And according to a new survey from ManageEngine, the IT division of Zoho, business deployment of AI is on the rise. In the survey of more than 1,200 tech execs at organizations looking at the use of AI and analytics, 80% of respondents in the U.S. said that they'd accelerated their AI adoption over the past two years.

Freshworks: 93% of IT managers have deployed AI, or plan to soon

All the sessions from Transform 2021 are available on-demand now. Nearly all IT managers (93%) are currently exploring or deploying some level of AI to streamline help desk systems, according to a new report from Freshworks. Half of IT managers said they have already implemented AI tools. Nearly 70% of IT managers said AI is either critical or very important for upgrading and modernizing their service desk capabilities. Even so, respondents said there are certain prerequisites for AI-enabled solutions.

Despite teething problems, artificial intelligence (AI) has become mainstream. In fact, it is more than mainstream. That is to say, no matter how enterprises set up their technology infrastructure, it seems unlikely they will remain competitive without AI. Based on a survey of 5,501 businesses globally, the report shows that one-third of companies are currently using AI in some way, while 43% are exploring it. While recent advances are making AI more accessible than ever, the survey found that a lack of AI skills and increasing data complexity are top challenges.

Join executive leaders at the Conversational AI & Intelligent AI Assistants Summit, presented by Five9. During the pandemic, enterprises turned to automation to scale up their operations while freeing customer service reps to handle increasingly challenging workloads. According to Canam Research, 78% of contact centers in the U.S. now intend to deploy AI in the next 3 years. And research from The Harris Poll indicates that 46% of customer interactions are already automated, with the number expected to reach 59% by 2023. The panel touched on how AI assistants can coexist with humans and help them to perform their jobs, while at the same time respecting existing customer service guardrails. "We're talking about a spectrum of technologies," Schebella said of automation broadly.